A Bit of Poetry

I've been doing some blog upkeep/redesign and letting my inner geek indulge itself. I changed the banner photo from this to this and have been mucking around with the content in the right column (and even thrown in a photo of myself, since, as has been commented upon, the photos I regularly post rarely include me as I'm the family photographer). Don't be surprised if you come to this site and find things looking even more changed as I've not been able to resist trying out new templates and layouts and arrangements of columns and fonts and all that.

I have a fair bit of inner geek to express. A significant percentage of my family members are either engineers or do 'something that involves computers i.e. they work in Silicon Valley.' As a Classics professor and avowed upholder of the humanities, I guess I could qualify as a black sheep except that, as you may have gathered, I like fiddling around with html code and computers and one could say it was a curious twist of fate that led me to become someone who knows the Latin and Greek root words of 'computer' and 'program' and 'digital' and all that---of 'silicon' too. At some point I'll get to a format that I'm pleased with (probably something very close to what you see already) and have to find other things to do, to distract myself from translating Virgil's Eclogues.

The Eclogues are pastoral poems. Their setting is the (ancient Italian and Greek) countryside; their characters are shepherds, goatherds, and neatherds (they take care of the cows, if you were wondering); their topics are generally love, poetry, and praise of the glories of the countryside versus the hectic, busy, potentially immoral life of the city. Sometimes a shepherd etc. has to go into the city; he longs, then, to return back home to the simpler good life in the countryside. Indeed, the first Eclogue is about two shepherds who meet on the road; one has to leave because a soldier has been apportioned his land, while the other is happily settled on his farm, as assured by no one less than the Emperor.

That's probably a bit more than you wanted to know about the Eclogues and on an autism blog, no less. I just went into a little detail because of the motif of going and coming, coming and going, in the first Eclogue. This blog is, after all, entitled 'We Go With Him' (it was 'Autismland' in an earlier incarnation, and, before that, 'My Son Has Autism'). And much as I liked the old banner photo of Charlie on his boogie board, I sometimes looked at it and thought, if it is 'we go with him,' then we're all following Charlie out into the ocean. Too, it seemed time to update with a more recent photo of Charlie as he's grown tremendously in the past year.

So, the new photo. The original photo was on this post, 'Solo,' and at the risk of sounding a bit grandiose, I consider it a shot of 'pure poetry.' I like that Charlie is running towards us, after a triumphant boogie-boarding and swim session in his beloved ocean, and at his favorite beach. He handles the board (still strapped around his left wrist) and he's running a bit à la Baywatch or like any ole surfer dude. When I think of how long it took to get him to being able to handle his own board, not to mention catching a wave with it in the ocean---and, going much further back, to learn how to walk (Charlie was 16 months old before he was able to do so)---not to mention the myriad of challenges that Charlie faces every day, and not the long long list of limitations he lives with---the photo captures something about Charlie that gets so very overlooked and forgotten as he forges ahead day by day. 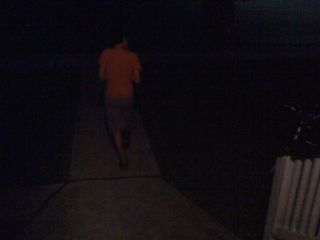 Thursday began at 5.30am. Charlie woke up and showered, and he and I went walking (with me reflecting how much easier it is to get out of bed at 5.30am when it's not dark and cold). He had a fourth great day at school in a row, and then a bout of distress in the car driving home that involved a soda out the window and me pulling over and us taking a short walk down a row of houses and then a quiet trip home. Quiet, because I turned off the radio (it was the R and B hour on the jazz station and I was kind of feeling that they were playing Howling Wolf one too many times) and because Charlie was completely quiet, as if reflecting in a rather shocked way about what had just happened.

He wanted a walk as soon as we got home which I thought a good idea; Charlie has been usually been requesting the computer once home, these past few weeks. Jim met us mid-walk and he and Charlie then went on a bike-ride. Sometime during dinner and computer and music-listening time, Charlie became much more relaxed and smiling, as if whatever had led to the in-car distress had at last worked his way out of his system. One more jaunt around the neighborhood with Jim and Charlie was very glad to go to bed, after another day of comings and goings together.

Now back to a little more blog design tweaking. And Eclogue 7.

I love the new photo and was looking at the portraits yesterday. I like them all, particularly the one of Charlie next to the train clasping is hands together (reminds me of Dimitri:)).

Charlie has come a long way - haven't we all? The journey is a good one, even if sometimes difficult.

Making a go at that Eclogue right now!

He's come a tremendous way, I can't believe it when I think about it all; the photos do really bring me back. I put up the original banner (with that train photo--it was taken at a time when we had taken Charlie out of school; a happy moment amid difficulties) here:

And just glad not to be alone on the journey!