A Growing Up Boy 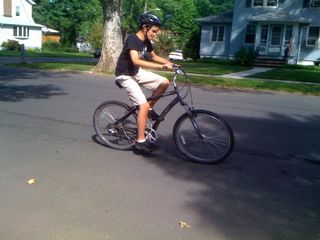 Charlie came out of his school with an aide beside him Wednesday afternoon, went around to the back of our car (it's a small SUV), opened the trunk, put his bookbag and swim bag in, and slammed the back down. And got into the car which, SUV or not, pretty much only fits three people.

He has---as you may have noticed in my photos---gone quite wiry (noticeable when comparing beanpole Charlie now to the rounder boy of a year and some ago). This is the result of: medication change (it's been a year since Charlie stopped taking Risperdal), lotsa lotsa exercise every day (which seems to be having the additional benefit of helping him lessen things like SIBs), genetics, one growth spurt after another (Charlie is, as also evident in the photos, almost as tall as Jim). And a long-limbed, long-legged boy needs to spread those legs out when sitting in the car----hence our five-seater car has become a three seater, and only in part because of the stuff Charlie likes to bring with him.

Now that he's 13, he is become a teenager, something I've realized I've been dreading for, oh, the past 13 or so years. When Charlie was around 8 and looking me eye to eye---and, too, at the start of what was to become five years of serious behavior trouble (which has been something we've had to deal with for pretty much most of Charlie's life, but a bigger, taller, child is---let's face it---much harder to help)---8 was when I could see the little boy was gone and that we were soon going to have an adolescent son---a teenager.

Of course, every parent has to face their child growing up. But when my child is disabled, and has had a much slower, much more irregular, development, and I really didn't know what 'growing up' would look like for Charlie. I read other parents' accounts and autobiographical accounts, read what professionals and caretakers and 'experts' and researchers had to say, read an awful lot of really saddening, maddening articles in newspapers. Some of it was hopeful and loving. and much of it was tough and terrifying.

Saddening, maddening, tough and terrifying: Yup, those all describe what the past years (starting with Charlie entering puberty at the age of 11) have been like. I so hate to say it, but--when Charlie was a preschooler---I would not have wanted to hear what I'm writing now. Things seemed so tough already. Charlie struggled so much (still does). Charlie couldn't talk, slapped his head, cried and screeched when we tried to have him walk a different direction down the sidewalk. I wouldn't have been happy to hear that my child would always be in a special ed classroom, would be watching the PBS kiddy shows (the same ones that he first saw when he was 2 years old), and would have made it possible for me to break into fairly accurate renditions of numerous classic Barney songs at a moment's notice.

(It's just me, but I really do not like Barney and don't get me started about Baby Bop.)

Hopeful and loving: These words equally describe what life with Charlie has been like, even at some very dark and difficult times. We loved him the first moment we saw him at Missouri Baptist Medical Center late on May 15, 1997, and we've loved him even in those difficult, difficult-est moments, all the way to him being tall enough to take hold of the trunk door without having to strain and stretch.

I, though, had to stretch up my arm to help him cover his mouth when he coughed yesterday evening, as we waited for our order at a Mexican take-out restaurant. Charlie had had a very good day at school (they'd gone swimming, too) followed by a bike ride with Jim and a long walk whose first half was more of a combo sprint/power-walk. It was no surprise that he was hungry and he was very serious as we drove to the restaurant. As we waited, he suddenly turned to me and said,

And he smiled and I said something to the effect that, no, we were waiting to get Mexican food, a burrito. Charlie smiled bigger: I had gotten his joke, and he repeated it a few more times. I provided what I guess was the punch line.

Sharing a joke and using the trunk of the car on his own, without my urging: These things make me hopeful and make me realize, a growing up boy---a boy who insists on getting himself out of bed, showered and dressed and ready for school all on his own; a boy who likes those kiddy shows and who is becoming a jazz fan---is something, someone, great and even grand.

I think I may be getting a glimpse of what a grown-up Charlie is like, and, while there's a lot more growing up for him to do, I'm liking what I'm seeing.

Posted at 22:11 in Adolescence & Teenagers, Growing Up, Motherhood | Permalink | Comments (11)

Patrick's Barney phase was longer than the average typically-developing child's would be. He was also very into Raffi (just one particular tape).

But what took the cake was the Mary Poppins phase. Once a day, every day, for three years. That's (count 'em) over 1,000 times. Not even Mary Poppins can stand up to that. ;-)

He's such a handsome boy.

My own two sons (well, step, but their mother and I are pals) are now 32 and almost 30. As you know, they're neurotypical...more or less. And they are both several inches over six feet.

The elder's face, in particular, changed remarkably with adulthood. I have to squint at him to see the small boy I fell in love with when he was six.

What is surprising me right now is that my younger son's son, my older grandson, looks more like his uncle at the same age than his father.

Looking back on both sons' lives from say aged 11 to their mid-20s -- turbulence, consolidation, calm. Repeat cycle. At varying durations.

But I wonder: are they soothing because (a) he knows exactly what is going to happen and (b)they don't strain his language-processing capabilities.

No sane adult likes Barney. What would you think of a student, or a doctor, who told you that they still watched Barney? That they loved the show?

I bet Charlie keeps those loving, hopeful qualities all the way through his life. Chilean's basic personality approaches to life don't seem to change, unless they are subjected to brutality that warps them.

Are there summer camps or exercise programs for children and teens with spectrum disorders? It seems like such a natural! Especially as exercise is such a good experience for him.

Oops, "children's" not chileans". Sorry about the double-take worthy typo.

I think Barney is soothing for Charlie precisely because he knows what is going to happen; the show does not, indeed, 'strain his language-processing capabilities'; and it's broken up into predictable and routinely short segments of singing and dancing and scenes in which conflicts occur and are gently resolved. It's mostly some of the older song routines that Charlie likes to watch; he has no interest for newer episodes (who is that orange dinosaur?).

There are camps and programs but they generally don't allow for the level of physical activity that Charlie prefers. I've noted many more camps for teens with Asperger's and so-called 'high-functioning autism'----art, computers, film---some are for students with different skill sets (a lot more language and reading ability) than Charlie, and some remain to be investigated.

Fortunately, summer school is 6 weeks and 5 days a week for Charlie---first time he's had that.

Never had a Mary Poppins phase---I am hearing 'jolly holiday' ringing in my ears right now!

You hit the nail on the head: Barney and Thomas the Tank Engine are beloved by the autism crowd largely because they're predictable and the language and emotions are easily understood. But hey, I must have read all of Jane Austen a hundred times. Some things are classics and their familiarity is a joy.
Baby Bop, however, is definitely of Satan.
I had to smile when you wrote about covering Charlie's mouth with your hand when he coughed. I've noticed that one sure way to tell the over thirties from the younger generation is by the manner in which they stifle coughs and sneezes; the under 30s have been taught to use their elbow. More sanitary, y'know,
I notice that Charlie has the typical autistic pronoun confusion. He says, "Your Chinese food," instead of "my." Once again it's the way I speak French and Spanish. Despite years of study I can never get those pronouns right. Interesting.

Baby Bop is a menace, if you ask me. Charlie particularly likes to watch clips from a video in which she wishes she could have her own school 'just for me' (said in that awful squawl) and benevolent Barney of course tells her to use her imagination and voilà, there's a school, as she wished. Charlie watched the video and I watched and heard it, unavoidably) over and over on a DVD and then on YouTube clips until, mercifully, the copyright protection police stepped in and the clips couldn't be seen.

Coughing and blowing the nose are still on our 'working on it' list.

Definitely pronoun confusion here! I think it might get untangled eventually, as things seem to with Charlie---for years, he said 'yee' for 'you' and 'your,' and now he pronounces those words much better.

It's not so much "Jolly Holiday" as "Step in Time" that gets stuck in my head.

Then again, I've had "Defying Gravity" (from Wicked) going on endless repeat for the past two weeks or so. Maybe I'm just prone to it.

I can relate to this post a lot. Dimitri has just turned 10, my feelings are a bit like shouting out loud "here we go!" . I still feel trepidation, although I know we will deal with each step as we get to it, and it sure is nice to read this post to remind me of that.

I still have a soft spot for "Stay Awake." I used to sing it to my brother during long family dinners.