Home Archives Profile Subscribe
'Smile' & 'Sunny'
I think this was what you'd call a full day (or, life is a merry-go-round)

Tuesday, the first day of Charlie's inbetween-school-and-ESY-vacation, was a fine day, despite a lot of 'despites' (as you'll see as you read on).

It started (after a walk and breakfast in the white car, as Charlie likes to do sometimes when he knows we are going to go for a ride) with a visit to the neurologist. Charlie's neurologist is about an hour and 45 minutes away in South Jersey; we've been taking Charlie to him for just over a year. When we started going to this neurologist, Charlie was wearing the helmet at school and he sometimes got desperately upset in the car on the way to the doctor's office. During one visit, we were explaining about how our former school district's ABA consultant had been talking about a 'temporary residential placement' for Charlie at a facility called Bancroft; Charlie, on hearing this, got extremely upset and threw himself at the nurse who afterwards suggested that I talk to her in a separate room while Jim stayed with Charlie. We all agreed that Charlie had been thinking that the doctor's office and the nurse had something to do with him being 'sent away.'

We felt awful that this had all happened at the doctor's office but they were more than incredibly understanding. The nurse told us that her daughter, who had passed on, had been developmentally disabled. From that moment on she and everyone at the practice seemed to go at least a bit above and beyond to help Charlie, not only by refining his medications (and fielding my numerous and long-winded phone messages) but taking into account Charlie's behavior therapy, educational placement, activities at home, and just listening.

For some months we saw the neurologist and/or the nurse (and, once, a neuropsychologist who's not there anymore) on a regular basis. But December was the last time we'd been down to their office due to a snow day and scheduling difficulties.

Yesterday's visit was worth the wait  and all went smoothly. We'd decided that it's best for Charlie not to hear lengthy discussions about himself, his behavior issues, and so forth, so after he had his vitals checked and had seen the nurse, he and Jim went to wait outside the office (which has a waiting room that has too many hard edges and angles for our comfort) in the sunny wide open foyer (I guess that's what it might be called) of the building. A couch and some armchairs, and a stack of magazines, made for pleasant surroundings for Charlie and Jim to pass almost an hour while I talked to the nurse and the neurologist.

Afterwards we did what, I have to say, is an excellent thing to do following a serious discussion about psychotropic medications (we'll be changing some of Charlie's, slowly), transition plans, blood work, and insurance companies. We took local roads through the piney Pine Barrens, past a little historical site where iron balls were once made in Batsto, and went to the beach. 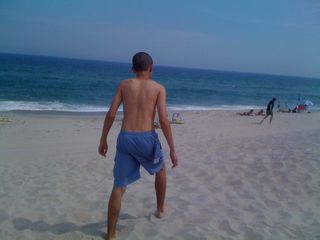 Charlie did  his best swimming so far. A young woman joined him swimming and I'm suspected he appreciated the company. She noted to us that the sand went from shallow to a 'shelf' that was fairly deep, and that there were jellyfish; while neither of these particularly bother Charlie, it was definitely very kindly of her to help call Charlie back when he did his usual putting his face into the water and swimming out to sea. 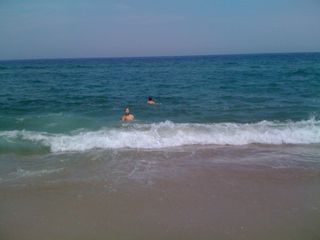 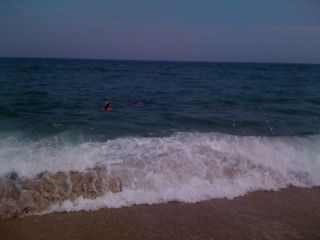 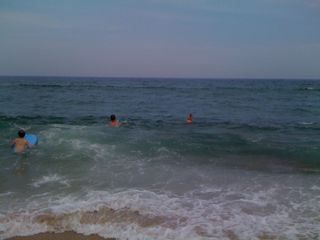 There were lifeguards today and Charlie did well heeding our instructions to get out of the water when he drifted too close to the imaginary line in the water marked by the orange flag that you're not supposed to swim past. He ran back on the sand and back into the water.

After the young woman had chatted with us and given Charlie a high-5 before rejoining her friends, Charlie was joined by three younger boys in the water. While he continued to do his own thing, running in and out of the waves and occasionally turning around to catch one and swim in its crest, he stayed near the other children. I'll even go so far as to say, he watched them some. As Jim noted, Charlie seems to be trying (to be wanting?) to swim near and with other people. 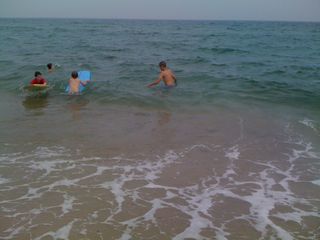 It being a weekday, there was no traffic on the ride home. Jim rested (it was a lot of driving) while Charlie and I, and my parents, went on our usual walk. Charlie put on his bike helmet almost as soon as we were home and, after 'refueling' from the refrigerator, he and Jim were off. It started thundering and then raining shortly after they left. They took refuge in an ice cream/sub (as in submarine sandwich) shop and waited out the storm. Charlie kept wanting to go so as soon as the skies cleared a bit, off they went. As it's not so easy (as in not easy at all) to explain to Charlie that wet roads are very slippery, he had a fall and needed some tending to on his left knee when he came home.  But as Jim noted, he was game to get up and go and with a minimum of anything like complaining.

A nice hot shower, a little more refrigerator raiding, some computer time (with a balky internet connection, perhaps from the rainy weather), and Charlie wanted to go to bed at 9pm.

It had been quite a day.

Super busy day, but a good one!

I am very encouraged by stories about good visits with good neurologists. Thank you.

Also love your perceptive observations of Charlie, ie nearer to other people in the water.