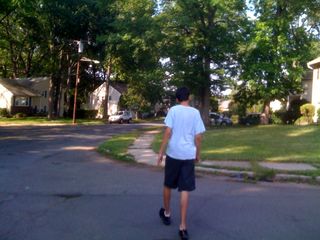 There was a literal change of direction in our admittedly routine routine on Thursday.

On our usual after-school long walk, Charlie stopped at an intersection and, instead of turning left, he turned his head to look at me, paused to check for cars, and crossed the street. He kept walking straight and we eventually ended up at one of the streets that are part of the long walk, and proceeded as we have been. This little change shortened the walk by about a mile and it wasn't a bad idea, as Thursday was that potent weather combination of hazy, hot and (my least favorite of all) humid.

(It doesn't get humid in my native northern California but it most certainly does in the southern China that every one of my ancestors hails from.)

Charlie had had a tough morning at school which---it finally occurred to us when he announced that it was 'bedtime' at 9pm on Thursday night---we traced back to his having a lot of trouble going to sleep Wednesday. He'd gone up to bed by just after 10pm with a smile, and then turned and tossed.

Thursday morning, he woke around 5.30am and then must have gone back to sleep. He still got up on his own around 7.30am and was in a happy mood as Jim and I drove him to school, excited to hear Phil Schaap come on (Charlie is quite all right with hearing the same Christmas broadcast down at the Royal Roost in 1948 as many times as Phil cares to play it, which has been, of late, a lot), and eagerly jumping out of the car to walk in to school. He'd got upset while doing routine activities, working on his programs at his desk and in integrated speech therapy---indeed, he was out on a walk in the school hallways when he'd gotten really upset.

He was quiet and serious in his expression when he got into the white car after school. His aide mentioned a difficult morning, a better afternoon.

We stopped at a convenience store for a soda and some snack items (negotiated over between Charlie and me). After I had paid, the clerk handed the bag to Charlie.

With Absolutely No Prompting except, of course, from the prompt of the clerk giving him the plastic bag.

That, and Charlie's deciding to take a different route on our walk, reminded me, things balance out. Too, yesterday on a fast fast bike ride (which is become the routine for a bike ride), Jim noted that Charlie had tried, for the first time, to shift the gears on his bike (though whatever setting he put them into meant that Charlie had to pedal like crazy like in some zany silent movie with the likes of, um, Charlie Chaplin; Jim came to the rescue). (And I apologize for my pun-y title but sometimes I just cannot resist.)

On Thursday's bike ride, Charlie crossed a busy intersection after watching the cars on his own. This was another fine triumph that did have a corollary: Jim missed the signal and found himself watching Charlie pedaling, again at a fastfast speed, across the intersection and further and further away and had to, accordingly, make some 'interesting maneuvers.' Once home, Charlie asked repeatedly for 'lemonade,' 'lemonade,' and ended up drinking a full gallon.

If you teach a boy to ride a bike, he will ride it.

And a good long sleep.

Looking both ways. Saying thank you w/o prompting. And changing his own routine!

That's so huge! Good for you, Charlie.

And I could see why he'd be a little cranky.

When these unprompted little leaps occur, I always wonder if it's our kids continuing to mature, or if it's because they've been capable of it for a long time but are feeling secure enough to take a change. Perhaps a combo. Regardless, rooting for you and your handsome Charlie.

That's a lot of lemonade! And a wonderful afternoon.

Jim just reminded me that he did drink some of the lemonade, too. But Charlie drank the rest until it was empty.......

How wonderful that he said thank you without being prompted.
Jim's heart must have been in his throat when he saw Charlie peddling farther and farther away. Yikes! My DH used to take my sons and their friends on the annual Bike New York ride that went over the Brooklyn Bridge and on and on for miles. DH was fairly confident of our sons' abilities but some of their friends weren't used to riding that far and he had to corral them when they fell behind. The things we do for our kids!

wow, kristina. is that really CHARLIE??? he's so tall! and lean! and yes, changing gears.

Dancing a jig over here! Yes, definitely things balance out. :-)