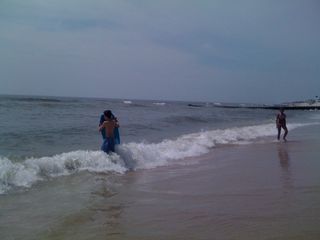 Charlie having done ABA since he was 2 years and 4 months old, and Charlie having had his share of 'behavior issues,' we've become quite familiar with some patterns in his learning and in the fall and rise of his behaviors. One pattern is that, after Charlie has mastered something, he takes a few steps 'back'---seems to lose what he'd just learned after so many painstaking steps. It might be learning to build with blocks or to say 'Fisher,' his own last name: No sooner would we be checking off certain skills and programs as 'mastered' then we'd see Charlie getting stuck about where to put one block and then another, or we'd hear not 'Fisher' but 'Disher' (which latter is ok; it's still recognizable especially when pronounced along with Charlie).

Wednesday was the day Charlie stopped having to wear the helmet as part of his school behavior plan. Both Thursday and Friday morning Charlie had trouble at school (and had a good rest of the day). Saturday, after a fine beach swim and lunch, he got really upset in the car and we had to pull over, walk him, have him sit with a timer on the grass. He was ok then to get back in the car and we resumed our ride home on the New Jersey Turnpike. He wanted the computer at home; he also wanted me to bring in all of his things from the car. I brought in a few and, wordlessly (pointing at the door), indicated that he should bring them in himself, which he did after 10 minutes of asking. He and Jim went on their usual bike ride around 4.45pm; Charlie was, Jim noted, just not his usual self. He dug into a bowl of watermelon once back in the air-conditioned dining room and then---after watching an old favorite video of four children, a beach call, and a dog named Jesso---asked to shower and went to bed at 6pm. He was asleep within 40 minutes.

The weather continues to be humid and hot, though it's just one factor. Jim and I had noted other signs. On Thursday, Charlie had started to insist on bringing extra stuff (blankets) into the white car---a little sign that he had some growing, obsessive need to have things be a certain way. He definitely must have had some stomach trouble Friday morning and Thursday's woes were in part due to a lack of sleep the previous night. I'm also quite sure that he's aware that the school year is winding down. Charlie does have a full six weeks of Extended School Year that goes into early August, but it is a change.

I've been recording 'ABC data'---behavior-speak for 'antecedent-behavior-consequence' data---for almost 11 years. It's helpful for noting patterns, like the 'just mastered and then take a few steps back' one. I've also realized that it's possible always to find something or other that could be 'triggering' a 'behavior'---weather, a queasy stomach, another student singing loudly, another student upset. And it's hard to say it, but sometimes things just happen.

Going back to the 'just mastered and then a few steps back' observation. One reason Charlie may falter after having learned something and then have to go back and relearn it, is that he may be feeling some kind of unspoken pressure to perform and keep doing well and (time and time again), it's been the case that Charlie gets anxious from that kind of expectation, and struggles anew. Swimming upstream against a heavy current has always been a metaphor for how Charlie learns. Having made some good distance, he's been letting the water's flow take him in what direction it will--back downstream---and he's got some more swimming ahead. It's as if, he moves back two or three or more miles, for every one he gains.

But Charlie does keep moving. The good thing about these latest 'behaviors' is that, once the crying and calming down have passed, Charlie has been able to get on with his day. The day isn't ruined, or over, because of 30 minutes (not that they were a fun 30 minutes). We do want Charlie to know that it's ok to get upset---who doesn't in the course of a day?---but there are better ways of doing it.

Teaching him this isn't ever going to be over. Indeed, I think it can be said that coping with change is going to be a long-term challenge for Charlie. And as things always change, and not just the weather---people come and go, one grows and ages and one's body changes, and (of course) so much, much more---just helping Charlie manage to keep the peaceful-easy in the face of the reality of life is the main task facing Jim and me, and Charlie himself.

It's the ebb and flow that we have to help him learn to be in. 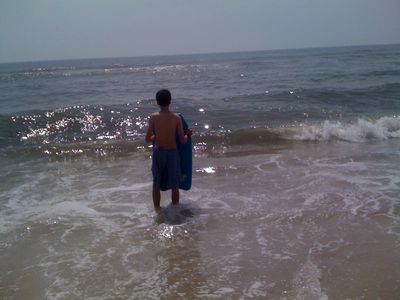 This is an especially lovely post - with your descriptions of Charlie's learning being easily applicable to many children.

You have given me the idea to post on journal-ing as a method to help parents make decisions for their children. For many, blogging is their journal, but perhaps I can suggest how record-keeping can guide a parent....? We'll see ;) Might have to link this!

It's funny that you say that about journaling: Jim talks about my blog as an 'online archive' and another friend refers to her blog with a term like her 'online [??] memory'---a way to keep track of, indeed, the ebb and flow of things. I'll look for your post!

You were brave to pull over on the Turnpike on a busy Saturday. I'm curious to know what Charlie does when he has a "behavior incident." Does he try to get out of the moving car or does he scream and cry?
I'm reminded of my father's old warning of "If I have to stop this car..." when my cousins and I got rowdy on long car trips. The threat was never articulated but we got the message and settled down, every time.