I think this was what you'd call a full day (or, life is a merry-go-round)

Wednesday we, Charlie included (but not my mom and dad who got to 'sleep in'), awoke at 4.30am, got in the white car, and went to the lab at a nearby hospital where, one year after his neurologist had wrote out a list of tests, Charlie had his blood drawn. The neurologist had requested that a number of tests be done (in part because of the medications Charlie is taking) and, over the past year, we had visited a number of LabCorps to get these done.

At his first ever such visit to a LabCorp, Charlie sat as several vials of blood were drawn from his arm---and then we were told that, as the lab was not able to handle doing all the tests, all of that blood ended up not being used. Subsequent visits were all unfruitful, Charlie understanding what getting one's blood drawn means and the technicians all very uncertain when he showed even a small sign of anxiety---all that glass and all those needles....... Plus, no matter how early we went, the waiting rooms were always packed and the additional minutes and crowds did not, not, help.

Finally it occurred to us to try to take Charlie to the lab at the hospital where, for worse or for better, he's a bit familiar. I called them last week and they asked me to fax over the neurologist's script, so they could get everything prepared; they also pre-registered Charlie and getting these steps done in advance was very helpful. The hospital lab also asked if it might be good to have some extra personnel around and, while Jim and I would of course both be present, I said yes. So there were a couple of people greeting Charlie at the lab.

We tried him sitting in a big cushioned chair and then lying down. The technician had to put a needle in both of Charlie's arms as he moved the first time. Jim was standing within eye contact of Charlie and told me he could tell how scared he was. But Charlie got through it with so many strange people standing around and a bit too much language being uttered---understandable that many people talk more when they are nervous, but too many verbal directives are not the best thing for Charlie himself when he's in a nerve-wracking situation; must mention this point in advance in the future.

Once done, Charlie ran out of the room with Jim beside him, I finished up a few administrative details, and we all proceeded to get lost in the 4-story parking lot trying to find the white car.

Car found, we got bagels, and talked about going to the ocean.

Charlie wanted a walk on coming home around 7am and off he and I went, glad that it was still so early as it was already hot. After that, he wanted a bike ride, too, and Jim obliged and then Charlie was ready to go to the ocean.

Only, Jim had rented a minivan as our white car's back seat has room for Charlie, some 'favorite items,' and not really anything/one else. (As in, my parents.) And the van would not be available till 3pm.

The intervening five hours were somehow filled with Charlie sitting in the car (despite coaxing him into our much cooler house), two rides (one back to the hospital to drop off something and another to the Golden Arches which was packed, as yesterday was the last day of school for many children, and many schools seemed to be celebrating with a fast-food lunch), and a few fleeting moments in the house. At 2.20pm Jim and my dad and Charlie went to pick up a black minivan which Charlie, who had started crying as they approached the rental car place near the airport, absolutely refused to enter for the better part of 30 minutes. We went walking and when we came back just befpre 5pm he was talking about getting in the van:

(Though Jim told me he thinks it's actually dark blue.)

Not only was a fine swim had by Charlie----- 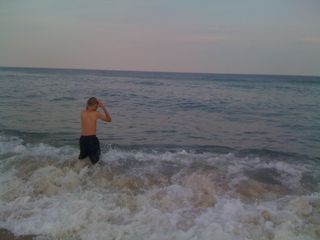 ---afterwards, he requested to ride the ferris wheel and merry-go-round, both of which he's been not wanting anything to do with for a few years. 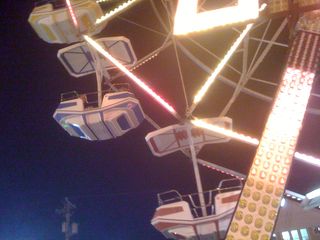 Charlie has ridden the merry-go-round many a time but yesterday was the first time he got on and off a horse by himself. He rode a white-painted steed with a true smile. 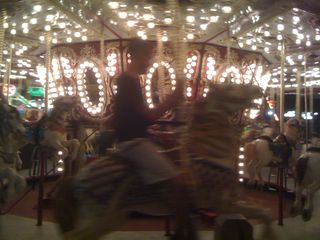 After running out the amusement park gate through which Jim had once carried him wailing and thrashing because our just-diagnosed two-year-old had decided he had to live on the ferris wheel and he could not believe that we were taking him off it, Charlie was merry all the way home. He went straight to bed just around midnight.

Yes, it was one very full day. 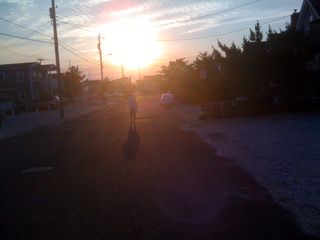 Ugh, we were at a LabCorps yesterday too (and that's what my post today is about too!). It was part of a hospital and the tech was terrific and used to autistic kids. But it was still a horrendous experience for both me and Little Dude. I think we both may need sedatives in the future.

Yikes! That WAS a very full day, indeed! So glad the lab was accommodating; what troopers you ALL are for making the trek so early in the day.

I LOVE LOVE LOVE that Charlie got on the merry-go-round horse independently. Nik still won't ride the carousel at all. (Odd, given how he loves to be spun in circles.)

Good for Charlie!
The world must be a confusing, random place to him sometimes. People sticking needles in you, talking, talking, talking about something unintelligible, a different car appearing out of the blue (where's the white car? Is it gone forever? Why?) No wonder he likes the old familiar things and routines.
My kids like the terrifying rides at Great Adventure and the boardwalk but sometimes they deign to ride the "kiddy rides" with deliberate irony that I suspect masks a sense of nostalgia.

Proud of you Charlie! I'm glad you had a good day after being so brave for the blood draw and having to endure a different vehicle!!!!

Aak! We need a visit with the blood-drawers, too, and I've been putting it off and putting it off. Just a dr visit asking him to open his mouth is impossible. The last trip we had to ER (complete with IV) was a disaster. ((hugs)) for coming up with a plan that worked!

Woo-hoo! What a wonderful day for everybody. It's so heartwarming to see his true delight at being on the merry-go-round. Next thing you know, you'll be hitting all the summer carnivals and perhaps even Great Adventure.

I am impressed with Charlie's bravery in getting his blood drawn, as well. In our house, we would say he handled that very maturely and responsibly - both *extremely* crucial and commendable traits regarding health care procedures.

Give him a fist-bump from both of us.

Thanks to everyone! Yes, things have been really good---reminding myself, since Charlie is off from school, the next couple of days could be harder/

I think I had become as nervous about the blood drawing as Charlie. I couldn't believe it when I looked at the script and it really was dated 6/2009. I really never thought about going to the hospital till someone suggested it, I can't remember who. It was still very hard but it was much less cramped, there were many more people to help, and their being able to get so much paperwork etc. done in advance was a huge help.

Not sure about roller coasters though---not so much the movement but the noise, all that clanking and people screaming, not for Charlie I suspect!