Home Archives Profile Subscribe
Ebbs and Flows
Something To THINK About: The Thinking Person's Guide to Autism

Right Back To the Water

Charlie woke at 3am on Sunday morning. I set the iPod Touch timer and he took it and kept it in by him while using the computer and for the half-hour that he went back up to his bed (and I snuck in a little more sleep). A 5am the timer went off, Charlie got up and dressed and off we went for a walk. Due to the hour, the streets were quiet and it was relatively cool but with a touch of warm that tells you, it's going to be hot.

That must have been why----even though Jim and I had agreed that, after Saturday's trouble, we'd stick around home (indeed, we kept asking ourselves why we'd gone for a long car ride on Saturday knowing that Charlie had gotten upset two straight mornings in a row at school on Thursday and Friday)---by 10am we were all in the white car, with a beach towel and flips flops and swimsuits in a big floppy blue bag, en route to the beach.

In our life with Charlie, it's been a bit of an unspoken mantra that when something goes, well, bad, we dust ourselves off and try it again as soon as we can. After all, who'd want to let one beach visit gone sour hang over their heads for a whole week? 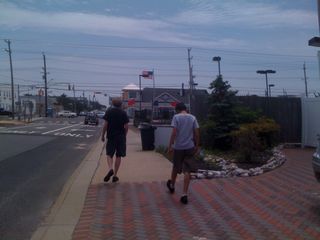 Jim thought we'd rent a kayak, as getting our own 'down the shore' is a bit of an operation and Saturday's tough return trip lingered in our minds. Charlie was all smiles as he paced round the beach surf 'n' swim store and held onto two lifejackets as Jim and I carried the kayak just over a block across the street (Jim telling me we could set it down as much as needed). 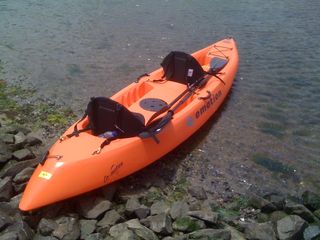 Yes, Charlie should be carrying a bit more of the, um, weight versus his shrimp of a mom. But it's pretty recent that he has been ok walking and staying with us without having someone assigned to holding his hand. And he had the biggest, brightest smile the whole time, and put on his own lifejacket and, after taking off his shoes, waded into the shallow bay waters. 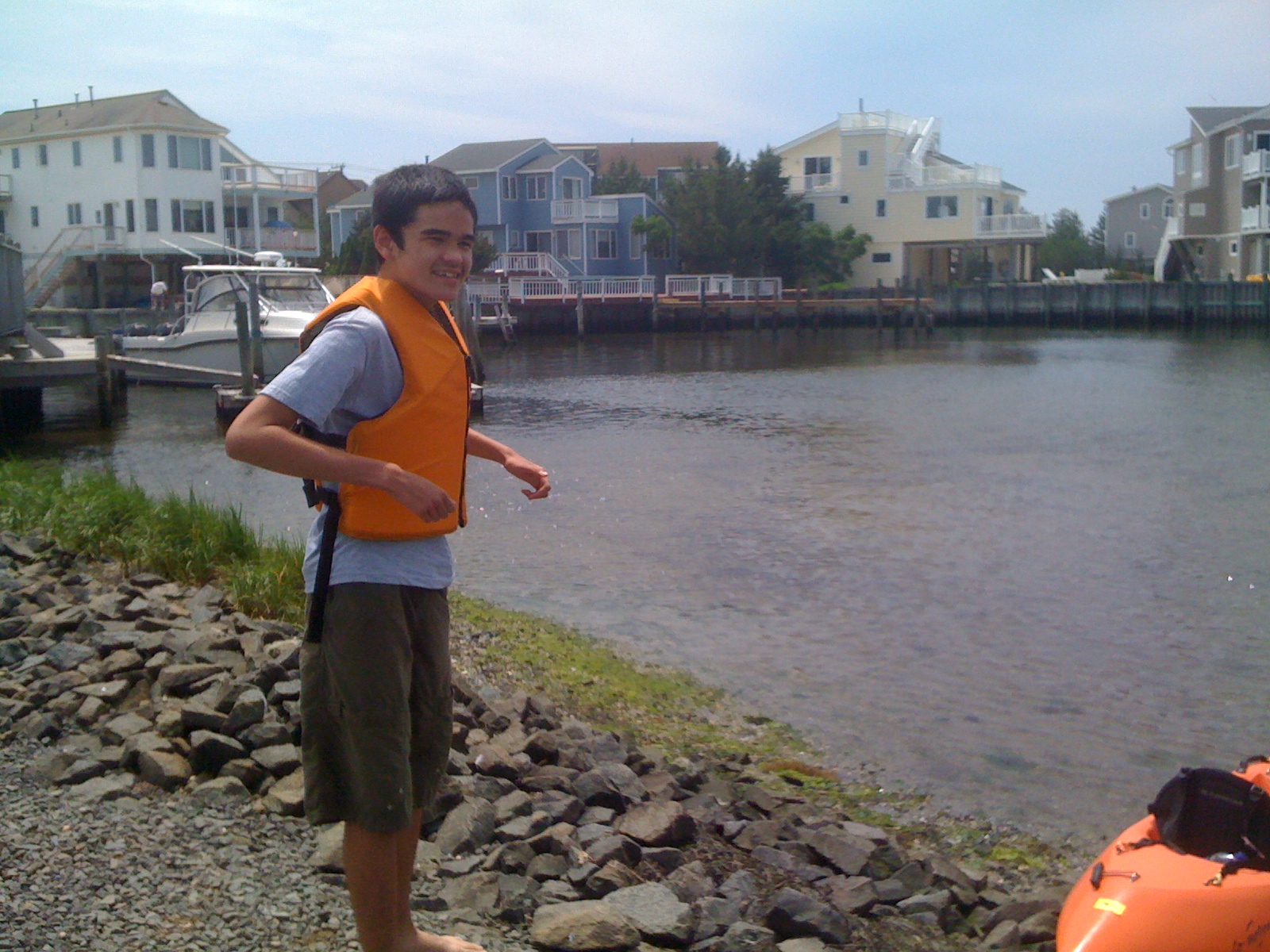 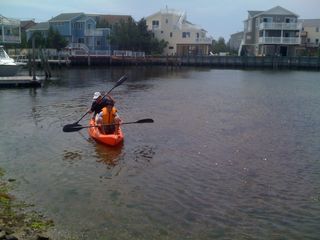 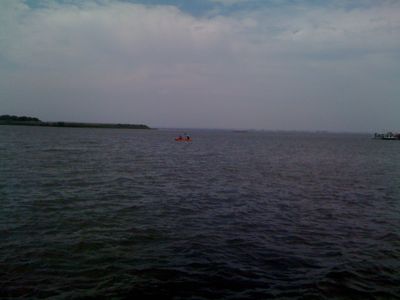 I went down the street to a bakery for some sweet stuff. A few minutes after I had returned, there were Jim and Charlie---it'd only been about 15 minutes. Jim explained that the water was rough with a wind and they'd already turned over and gotten dunked, and soaked, in the water. Jim said they'd still close to shore and off they went again.

Charlie decided to take matters into his own hands. 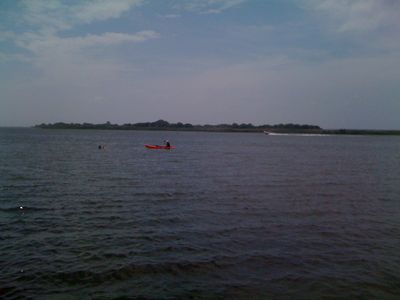 The bay waters were shallow and warm and Charlie, with Jim paddling nearby, set to showing off his swimming prowess. There was a lovely breeze and the air---hot and unmoving Saturday even at the beach---felt delicious. 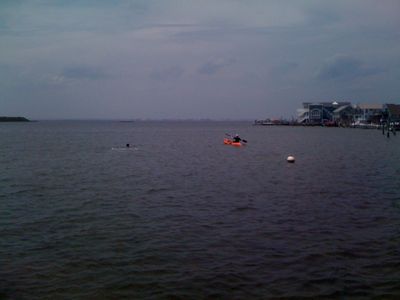 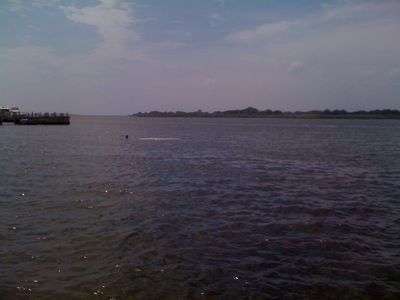 After a good workout, Charlie came back to land and go himself dressed in his swimsuit. 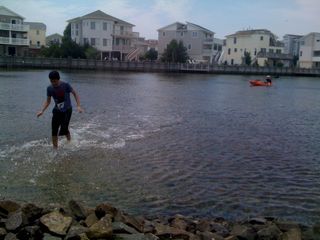 (Yes, next time he should just put it on to start with.)

We carried the kayak back and while Jim handed the paperwork-y matters, Charlie raced up and down the sidewalk and I decided I could really use this blue bike. 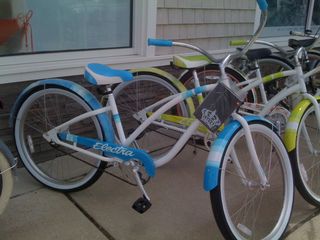 Or maybe this black one with the hibiscus? 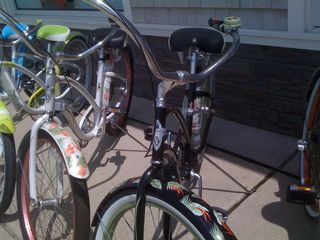 Jim and Charlie downed some chocolate-frostinged items and we had a peaceful ride home, with some inevitable traffic.

After three days of 'behaviors' Jim and I were on watch. It was as hot and the air was a s thick as ever back home. Charlie and I, per his request, took another walk, followed by vanilla soy ice cream eating, a half-hour rest, and a bike ride during which I ran off to the supermarket for a watermelon and a gallon of lemonade, leading me to feel that it was turning into a day of lugging heavy items around.

Not complaining or anything. Especially as, after a long bike ride in cooling temperatures (no more need for the air-conditioning), Charlie betook himself to bed at the very fine time of 9.30pm, still bearing about himself glimmers of the smile he'd had swimming in the bay beach. 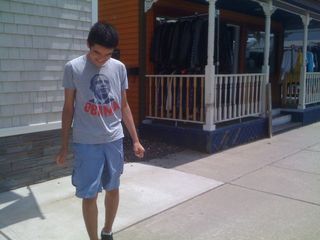 A watermelon and a gallon of lemonade - interesting shopping list you've got there:)

Charlie looks so happy to be getting ready for the kayak, how could you not go to the beach? Charlie swimming and Jim kayaking seems like quite a good combo.

Glorious, indeed! That smile says so much! :-)

Love the photo of him with the life jacket on!

Everything I buy these days at the supermarket is 'in bulk' or 'large size'---Charlie can polish off a half a watermelon after he's had a bike ride on a hot day!

'betook'---a little archaic English; I can never resist! (my Latin and Greek dictionaries and translations often date from the Victorian Era and have many a trace of earlier uses of English)

His smile is so adorable. He looks so happy!

Archaic English is wonderful! I never truly understood the glories of the language until I took a course about Anglo-Saxon and Middle English. (I have a few enjoyable compendia if you ever want some bathroom reading.)

What an angelic smile Charlie gets in the water! Does your heart jump into your mouth when you see him jump out of the kayak? This is the year for investment in a kayak rack for the car.

Thank you so much for keeping this blog constant in such an eloquent way. It is a joy to be able to follow your family every day.