Something To THINK About: The Thinking Person's Guide to Autism 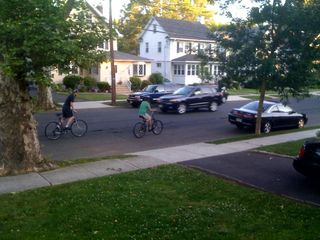 Charlie got in a full night's sleep on Sunday and, Monday morning, he and I had a cheery ride to the Big Autism Center, even with a brief turnaround after a few blocks when I realized that I had forgotten to give him his medications.At school, he got right out of the car and, when I picked him up several hours later, right back into the car, again cheerily. He didn't say anything about going into a gas station convenience store that (when he gets me to drive past it) he usually wants to stop in. As we neared home, I mentioned that a friend who'd visited us regularly last summer would be visiting; five minutes later, Charlie said her name a couple of times. He was (I'll opine) shy on seeing her and, after asking her to carry up some of his blankets to his room, took a 1 1/2 hour nap. She and I had a very nice talk and Charlie got up just as she had to leave. We said good-bye and Charlie and I set off on a walk at the end of which we passed a neighbor walking his dog, Julie; when Charlie simply kept on walking, our neighbor noted that Charlie usually runs away in fear.

Jim was home when we got back and Charlie immediately asked for his helmet, and off they went (as depicted in the photo above---one of many such photos I've taken over the years. I must admit). Charlie pedaled unusually slowly and, at one point, started crying. Jim and I both speculated 'stomach ache??' and were both proved right once Charlie and Jim came back. After a shower Charlie had a late dinner and used the computer before going to bed around 10.30pm.

Yes, yet another day in our life, and a fairly quiet one.

I'm good with that, with days without any bells or whistles, any 'excitement' or anything extraordinary. We've had plenty of days like that, many of those days on which difficult neurological storm (typhoonish-level) sort of stuff has occurred. Days when I feel like I've nothing much to write here about are days that I'm glad for: They're days when we've managed to keep the peaceful-easy going; when there's a general serenity, with a nod to that word's Latin root, serenus, an adjective describing a clear blue, cloudless sky (which was the actual state of the sky here on Monday, somewhat apparent at the top of my photo).

I guess writing about one serene day after another would make for boring blog reading. I was reflecting on this, on some of the more hair-raising and wrenching experiences I've documented here, and it occurred to me, I'm not sure I would have wanted to read about some of these sorts of things when Charlie was younger; when Charlie was just-diagnosed. Just a few days ago I wrote that, when Charlie was a preschooler, I don't think I would have wanted to hear how hard adolescence has been for him. I'm not sure what I would make of some of our, um, 'adventures' if I were just-introduced to life as the parent of a child on the autism spectrum.

On a mundane note (and since I'm not teaching this month), I've plans to do some blog-upkeep here in the form of adding some explanatory material about this blog and our family, as well as links to websites, blogs, other resources of autism and disability, books and the like (in the midst of some other things that need to Get Done, or at least need to be attempted before July and summer school teaching and freshman orientation and advising get underway).

And on a significantly less mundane, and even simply, potentially spectacular, note, I'd like to mention a new project that I'm thrilled to be a part of. It's a community book and blog project entitled The Thinking Person's Guide to Autism started up by some commadre bloggers, writers, advocates, thinkers. You can read more about it here and find out how you can submit something here. The book deadline is coming up fast--it's July 2nd---and the book will be published by August 3rd.

That means I better get crackin' on my submission, though I guess I have a bit of a record at churning out producing online content.

And regarding the realities of life with autism, something that I've always striven to chronicle in writing about our days with Charlie. The reality of Charlie taking a nap is that he tossed and turned and chattered for an hour in his bed on Monday night and then came downstairs. I set the timer and he used the computer. The timer rang after 30 minutes and---in the middle of a video that he's been interested in of late---I told Charlie 'bedtime,' he said 'bedtime' and went back to bed and, eventually, to sleep.

No, when I was a newbie parent with a baby who needed to nurse throughout the night, I would not have been thrilled to hear about the many difficulties 13-year-old Charlie has had going to sleep and staying asleep through the night. (Though, for the record. Charlie started sleeping through the night when he was about 2 months old.)

On the other hand, he is a teenager now and, being such 'diagnosis and all,' not exactly going to agree to a 7.30pm bedtime (not that Charlie ever went to bed that early).

And on the other other hand, when that timer went out last night, Charlie paid heed and went to bed without if's, and's, but's, or backtalk.

Yes, we're more often groggy than not, but coffee was invented for a reason, wasn't it? And life, this life on the long road with Charlie, it is good. I really think, I know, so.

Kristina, we are so thrilled that you're participating in TPGA. :)

It's okay to provide info for those who share your path but not your stage - the info will be waiting when they're ready for it.

Speaking of sleep - gaaah! If I was to ever get a TimeTurner, I would use it to get SLEEP. Until then we can all hope.

The first conference I went to for Angelman's syndrome, Dimitri was 4, recently diagnosed. It was incredibly stressful and there were teary eyes. But at the same time I really enjoyed talking to parents of older children and adults, (and looking at other children trying to imagine what Dimitri would be like when older - which is of course impossible, but you still try).

I was reading a post by Laura Shumaker today, I put a quote on my blog as it so reminded me of me. It kind of fits in with this post too.

Even though you've definitely had your bumps with adolescence (which I can very much relate to), I still wish that there had been someone like you writing when my kids were first diagnosed. Pretty much all that I'd ever heard was that puberty was going to be hell, and while it has been for us in some respects, you also manage to include the good parts. Reading a balanced view of what you might encounter isn't a bad thing- I often find that sharing an attitude is more important than being at the exact same stage of parenting.

The reality for most parents, as they hold their babies in their arms, is that they can't imagine the turmoil of the adolescent years. The difference is really that for typical children with typical parents, the turmoil is more familiar, and therefore more "expected." How many parents want to think about any of the issues that might face them as their children reach turbulent times, when they are holding babies, or dealing with toddlers? Whether it's sexual acting out or cutting school, or drug use - parents of typical kids have a lot they don't want to think about either. They just seem to have more of a community and a "normalcy" about the issues with which they're dealing. But no one with little ones wants to think about those things ...

I'm unlurking to say that, as a mom of a four year old, semi newly diagnosed (last fall) son, I definitely appreciate hearing about Charlie's days and the difficulties (and peaceful easies) of adolescence. You've given me new coping strategies and helped me name what kind of mom I want to be (an aut and proud mom!).

And now that I've unlurked (how is it possible I'm still shy on other people's blogs?) I hope to
comment more often.

I'm really liking The Thinking Person's Guide to Autism. Thank you for directing us!

And of course everyone here is more than welcome to submit a piece! And to pass on the word---hoping to get some contributions from self-advocates.

@Alexis, so glad you 'de-lurked'! I really appreciate knowing that you're reading --- my husband and I were just looking at some photos of Charlie at the age of 4 and 5 and I was thinking of what he was like back then. (Same lovable kid, much bigger cheeks!) If it's all right to ask, how is your son doing?

@Jen & Judy T, adolescence with Charlie is constantly bringing back memories of my own not very happy and fairly awful adolescence! I suspect my parents wondered many a time, now what exactly happened......

@Emma, I read the post by Laura Shumaker you mentioned and it really hit home. Setbacks, plateaus, just getting stuck and 'regressing'----sort of describes much of the past 2 years (though I know there has been progress). We seem to go up and down with reading and writing and are back in a bit of a 'rut' about those again--one just keeps trying and hoping. Though I do try to remind myself to just enjoy each moment more.

He's doing surprisingly well (thanks for asking!). We're in the middle of a huge transition (moving from Mobile, AL to Montclair NJ or surrounds -- my husband is a new hire at WPU in Wayne, but we like Montclair better) and he's having some setbacks but doing overall great with the changes that are happening in our house. (His speech therapy and preschool both ended in May and yet he's had a bunch of new language happening lately, hmmm...)

Now, the actual moving, I don't know how that will go (this will be the first time we've moved since he was two months old). I know he will be sad and miss his friends a lot. I know we have coping skills to get through the transition, too, and that's helpful, but I think it will be stressful, nevertheless (getting our house ready to sell was already stressful, but we got through it and got an offer the first week! It's closing in July, if all goes well.)

I'm trying to live in the moment right now and not worry in advance! (Except to plan, which mostly involves me obsessively googling various communities in New Jersey, trying to find "our" place.)

PS: We're from Northern CA, too (I grew up mostly in Sonoma and Marin and my husband was born and raised in Marin).