Home Archives Profile Subscribe
'Giraffe' (No, We Didn't Visit the Zoo)
At the Beach, Now and Then 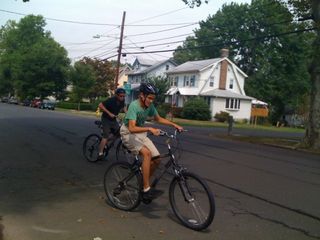 The newsworthy heat got to Charlie.

School was pretty good Friday except for a brief period in the morning when (perhaps because someone else in his room was noisy) Charlie got upset, distraught.

He was fine as the day proceeded and went on the weekly grocery store outing with his class. His teacher called me after Jim had picked up Charlie to tell me that the bag of soap, paper towels, and bananas was still at school but she figured it'd be ok 'since the bananas were still green.' Having not had his customary bike ride on Thursday, Charlie was raring to go on one almost as soon as he and Jim stepped into the house. I got out the bikes and off Jim and Charlie were off.

Riding a bike one feels a breeze and Charlie was in good spirits on returning. He went into the kitchen for a drink and asked to use the computer, but just for a short while. The internet connection was balky and soon Charlie was asking for the car. We'd been talking about going to the carnival in central Jersey that we'd visited on Monday night but it was still a bit early. Charlie stood around for a bit and then asked for a walk and, armed with a water bottle, off we went.

Charlie started whimpering within a minute. I couldn't blame him: While it had felt a bit cooler on Thursday, Friday afternoon outside felt like the inside of a bathroom, after someone's had a nice steamy shower and forgotten to open the window. Plus, the sun was out in full force.

We kept walking. One thing about Charlie is that he, once he's headed in one direction, the full trajectory needs to be followed. Being back at home with air-conditioning but an incomplete walk would actually render Charlie far less uncomfortable than he was out walking on a 90-something-degree day, with a far higher heat index.

So it was a walk of moans, angry sounds, and occasional sprints, not to mention much wiping away of sweat. Charlie walked as fast as ever and, frankly, I was glad he was. On Friday, getting through the walk as fast as possible might make us sweatier, but at least we'd be out of the heat sooner (albeit while getting a lot hotter). At some point I started to make occasional gently flippant comments ('yeah, we seem to be the only ones out here, I wonder why') as we walked past some overgrown weeds and the detritus from someone's having thrown their McDonald's refuse out the window. I've learned not to try to placate Charlie when he's distressed, but rather acknowledge that he is justified to do so.

(Actually, we did encounter exactly five other people who weren't in cars with the air-conditioning roaring away: one woman walking a skinny dog; a spandex-clad, helmetless bike rider; a restaurant worker on his bike with a backpack; an older couple (in long pants) who were both just a bit taller than me.)

Once back home (yay!), Charlie went for the watermelon I'd cut up and I told Jim that I felt I now knew why people get into bikram ('hot') yoga: It felt even better to be inside near the air-conditioning vents, after our 'workout.' Jim (who's certainly been getting his share of 'hot' exercise on his bike rides with speedy Charlie) assented.

We did end up going back to the carnival afterwards. Charlie gulped an entire bottle of water as we settled into the car and was all grins on the way there and then, five minutes away from the fairgrounds, he told us 'all done' and 'no ferris wheel.' Jim and I've both gotten pretty practiced in Charlie expressing his anxiety about something he likes with such 'no' and 'all done' phrases so Jim drove into the parking lot and found a spot and Charlie jumped right out. 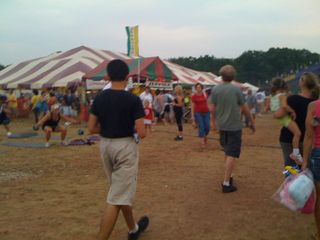 The fairgrounds were dusty with teenagers making the rounds and the smell of greasy grilled sausages and onions. Charlie shot a puzzled glance at a huge kettle of what had to be hot oil, for frying zeppole. We got sodas (Charlie wanted to grab the one on display and waited patiently for a cold one) and French fries (which were burn-your-tongue hot). Charlie and Jim rode the ferris wheel and then Charlie had his (now cooled off) fries. Then he made his way (darting among people with goldfish, strollers, and plastic blow-up bass guitars) to the giant slide where my attempt to stand by him to help him stay in the line resulted in my flip-flopped foot getting crunched under his size 10 1/2 feet. (Yes, ouch; it was my fault for not noting how close I was standing to Charlie and I shook it off; Charlie gets alarmed when hearing us issue loud sounds of distress and frankly, I can be a bit of a drama queen if I wish to.) Some much shorter---maybe half Charlie's size---kids squeezed their way in front of him; Charlie kept his eyes on the slide. He went quickly up the stairs and came down as fast.

Then he made his way over to the merry-go-round. We saw the same man with whom we'd had an advocacy moment on Monday. Jim and I exchanged glances and I said 'it's kind of a ride for little kids.'

There we went, and the Golden Arches too (Charlie handed me the bag with the burger wrappers inside after he'd eaten) and then home. It was still steamy outside; we'd seen a lot of heat lightning on the ride back. Jim and I waited around to see if Charlie wanted a walk. Instead, he helped himself to some soy vanilla ice cream (as you may have noticed, he only likes vanilla; same with Jim), watched some videos (the internet was faster, but still a little in and out), and then wanted 'bedtime.'

That was said with a definite smile and Charlie gathered his things and ran up the stairs.

And we made sure to lower the thermostat on the air-conditioning unit. No need for a Bikram Yoga-ish environment inside our house which seems more and more a place of place, after 'hot' exercise amid the (may I dare say at times) maddening crowd outside.

I wonder why cries of distress, coughs, sneezes and other involuntary or nearly involuntary sounds make some people with autism angry?
We had that problem in my classroom where D., a large, aggressive teen would bunch up his fists and threaten to hit his much smaller classmates whenever they coughed or, in the case of B., started singing. B. was fascinated by the then-popular TV show "Sha Na Na" and he tended to burst into "Goodnight Sweetheart" complete with "duh doo doo do dos" every few minutes.
The scenario went: cough. Threat by D., Cries of protest from the offending cougher, More threats, Redirection by myself or an aide, A few minutes of quiet industrious work, A chorus of "Goodnight Sweetheart," from B., Threats by D., etc.

I've thought of coughs and sneezes as simply being unpleasant, fingernails-on-the-chalkboard sort of noises----sources of sensory distress?

Charlie's doing very well with crowds, unexpected noises, and even waiting times. Do you think he could handle Great Adventure or something like it? Maybe the Safari Park - he could ride in the white car and see the giraffes, baboons, gazelles, camels and such?

Fingernails on the chalkboard indeed, except the one that gets to me is the sound of chewing, especially crunchy things. You never know. :-)

I'm wondering if Charlie doesn't like that sort of sound either----

Yes, the sound of someone sneezing isn't the most pleasant noise. My middle son tells me I "sneeze wrong" because my sneezes sound more like coughs. However, not being autistic he doesn't get angry or upset at me for cough-sneezing, just bemused.
It's a shame that Charlie's first reaction when you're injured and cry out involuntarily isn't concern for your well being. I'm sure he loves you but I suppose the unpleasantness of the sounds of distress overrides any feelings of empathy. Or am I wrong?

I guess I don't see it as his response (of distress) overriding anything like empathy---I do think he senses and feels our distress, but his timeline for expressing that is different!

He's much better about hearing coughs and sneezes now. Often we give him a 'warning' and that has helped.