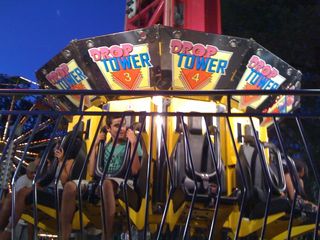 Next Tuesday: That's when Charlie will start taking the bus home from the Big Autism Center to our house. Yesterday morning Jim and I met with Charlie's teacher, a school behaviorist and the principal to discuss some strategies.

We've been Charlie back and forth to the BAC since he started there last November. Since December of 2005, he has mostly been taking the bus to and from school. He rode in a minivan-bus when he attended a small private autism school about 45 minutes from our house from December 2005 till June of 2006. From then till around June of 2009, Charlie rode a yellow school bus to the three different (two elementary, one middle) schools he attended in the central New Jersey town we were living in.

The bus was a non-issue until middle school which started at 8am, meaning that Charlie had to catch the bus at 7.15am----and of course 2008, when he started middle school, coincided with the onset of puberty for Charlie, a major growth spurt, and a great deal of difficulty for him to wake up in the morning. Charlie had more and more trouble getting up and was not happy when he dragged himself onto the bus which (of course) often came early and brought him to school early, so he had to sit on the bus and wait for his teachers. On a few such mornings, Charlie got very upset. And, at the end of the day, a couple of times his then-teacher called me to pick him up because they didn't think he should take the bus home. Finally, Jim and I just said we would drive Charlie and continued to do so when he started attending the BAC, to help him transition and because there are a lot of stations (if I may call them that) along the route that have been sites of Charlie having a major neurological storm in the car.

Jim and I have been wanting Charlie to start taking the bus for summer school. We were informed that arrangements had been made for Charlie to start taking the bus on the first day. But we figured he needed a lot more preparation before finding himself on a potentially longish bus ride that would take him on the highway, without a say in which direction the bus goes and no stops for after-school snacks.

Charlie's teacher and behaviorist have some good strategies:

We also talked about having the wrestling helmet that Charlie uses at school when he has a difficult moment available on the bus. Charlie would not actually wear it while on the bus but it would be there in a pre-emptive way.

We're also trying to find out how many other children are on the bus and plan follow the bus to see what the route is. Too, Charlie's teacher and the behaviorist said they'd try to make sure that Charlie is the last child on the bus, so he does not have too wait long.

All of this quite covered the sort of things Jim and I had been thinking of. By starting on the bus home next Tuesday, Charlie will have just about a week of ESY left before vacation starts; seems like a fair amount of time for him to get started with it.

The meeting attending with the school staff saying how they think Charlie 'delightful' (actual quote).

It was a very heartening meeting, needless to say, and I can (but of course) only confirm the delightfulness part. I do have to say, Jim and I are both feeling a bit wistful at the prospect of not driving Charlie home. Certainly it will be extremely helpful to have some extra time to get home to meet the bus, rather than having to leave work to drive out to his school (I'll be able to leave at around 3pm instead of 2pm, a huge difference in mom-minutes). But I really do love driving into the parking lot of Charlie's school and seeing all the buses lined up and the staff out, holding kids' hands, talking into a walkie-talkie sort of device to keep track of who's where, all the kids. It's not a chaotic scene though certainly very intense and full of activity. I always feel a sort of heart-into-the-mouth pang when I see everyone and when Charlie appears and I think, here we all are.

Jim feels the same. He picked up Charlie Tuesday and the two of them were already going out on a bike ride when I came home with some groceries, and that was only bike ride #1---Charlie called for another as the sun was starting to set and off he and Jim went, again.

And then what better way to fête our bike-riding and (hopefully soon to be) bus-riding boy than with a few rides at a local carnival, especially on the marvelous super-high frog-hopperish Drop Tower?

How wonderful that the planning that is going into this change is able to be so thorough and so thoughtful! What a difference it makes, when the teachers/school is genuinely committed to making things work! Good luck with this - I know it will be a huge transition, but having a team that is working together is going to make this work. Those steps into independence are always so bittersweet.

I was a bit floored at all the thought and thoughtfulness that was put into putting together the plan for the bus. Now I definitely know why I felt so alarmed back on the first day of ESY when we were simply told that transportation had been arranged for Charlie, and no word about the prep needed!

Happily, Kristina, you didn't use the transportation that had been arranged for Charlie at the beginning of ESY. THAT would have been a disaster! I have no idea why the transportation people and the "school" people never seem to talk to each other about anything besides when and where a student needs to be!

ESY ends next Tuesday. Matt is doing well with the hr bus ride to the high school for his ESY. Regular school yr he is last pick up & only about 15 minutes, now farther drive and first pick up and last drop off.

First time we are dealing with the very small bus - has always been a medium size bus, but this one has A/C so glad - even though no heat waves here at all. High 70s lately and breezy.

I am quite in envy of your weather! Glad to hear the bus has gone well. Is it a yellow school bus or a minivan that he is taking?

'Happily' is the word! One concern I've had about Charlie being out of district is the 'out of sight out of mind' concern, and the fact that it's often Jim and me who are the de facto link/liaison between the school district and Charlie's school.

I had told Charlie's case manager that we couldn't just put him on the bus back in May. Then we found out that transportation was arranged. On the first day of ESY I asked for a meeting---nothing happened for weeks---I called the case manager and found out he is out till September. (No one told us.) It took 2 more weeks to get the school to talk about a meeting as an administrator was out/on vacation. Then we had to find Charlie's summer case manager---that led to voice mail phone tag and me leaving her a number of messages in response to her message but she said she hadn't got them on Tuesday morning when we were meeting with the teachers (the summer case manager called me on the phone)---and though Charlie's school said they had confirmed the meeting with the case manager, she knew nothing about it she said..........

Just the usual runaround. But all's well that ends well.

When my daughter was in private placement, I was always amazed at how complicated things could be with her situation (they got VERY complicated at times), and everything stayed under control ... except the transportation! At one point they wanted an emotionally fragile child to be on the bus for an hour and a half (one-way), traveling through two full bus routes, and a bus switch, before reaching the destination. When I pointed out that there WOULD be problem behaviors if they insisted on this, and given where they were taking her, they should notice that, they finally changed her "itinerary." But the district people insisted that they had no control over the transportation people! I was totally on my own.

And there, too, all was well that ended well. Once they realized that my child was truly in need of "special care," and that I was not going to allow them to just stick her on whatever transportation was "most convenient" for them, they started to provide the transportation she needed. They were also amazing when her transportation needs started to change on an almost daily basis.

I hope everything goes as smoothly as possible with Charlie's transition!