Can't Beat the Heat So Just Join In 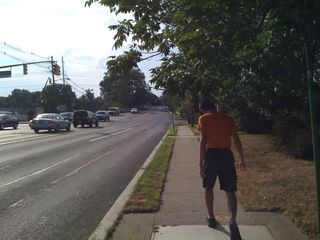 This summer of 2010 seeming very likely to be about to go down as the Hottest Ever Since They Started Keeping Records (at least so far for June), it's inevitable that I would post about it. Especially as I am, truth to tell, a heat wimp.

By which I mean, even though my genetic make-up---southern Chinese around Guangdong---would seem to 'predispose' me to being at home in hot, humid climes with the sun beating down, I really prefer summer NorCal style, that infamous San Francisco summer weather that makes for shivering tourists (thinking that if it's summer in California, it must be sunny and palm trees, right?) waiting in the cable car line on Powell Street with just bought 'SAN FRANCISCO' sweatshirts hastily pulled over their tanks and shorts.

I've got the phrase 'and the fog comes in every evening' stuck in my head.

Growing up, I quickly discovered that the Bay Area (I'm an Oakland gal) was charmed when it came to weather. My mother is from Sacramento in the Great Central Valley and it was on summer visits that I first got a taste of 99+ degree heat that made the sidewalks so hot you could (as my late Uncle Quonson liked to say with a grin and a twist of his mouth) fry an egg thereupon. My mom would bring towels so we wouldn't have to sit on burning hot seats and we made sure to bring the car whose air conditioning worked well (a cream Chevrolet Caprice Classic in my formative years). We also sometimes ventured down to San Jose with the sole aim of visiting not anything having to do with matters IT or computer-ish, but to go to Frontier Village; San Jose, to me, still carries a whiff of dusty orchards and one-story, faded stucco houses.

For four years (also very formative ones---I was 4-8 years old) we lived on the other side of the mountains in Contra Costa County, in a tract home so new there were horses behind our back yard when we first moved in (my sister and I spent a great deal of time peering through a knothole in the fence to catch of glimpse of their tails). I still remember the row of lilies of the valley my parents planted outside our bedroom windows amid the tanbark and to the side of the big beige humming air conditioner---we hadn't needed such at our old house in Oakland.

From where I'm sitting on our tough, and highly functional (and large), IKEA couch, I can hear our air conditioner working away just outside the backyard living room window of our house here in north central New Jersey. We haven't turn it off in what must be weeks. Our bedrooms are on the second floor and when Charlie goes up to bed we really blast it; it's certainly cooler on the first floor, but Charlie, Mr. Creature of Habit if there ever was one, sleeps in his bed, in his bedroom.

My own inclination in such temperatures ( 90+ degrees Fahrenheit/35 degrees+ Celsius) is to bunker down inside wherever there's air conditioning with a book and/or my computer and a big cup of hot coffee, sometimes tea (yes, you read that right, hot coffee or tea---in 1988 I spent summer studying Mandarin in Taipei, Taiwan; I had a room with a fan about as large as said laptop and learned to drink hot things to cool down).

As you know, we don't exactly do that around here, at least not while Charlie is home and awake and rarin' to go on bike rides (he called for that within 10 minutes of stepping in the door Wednesday afternoon) and a walk (he and I went on one after a sudden bout of rain and thunder with the sun out). Charlie makes a complete wimp of me: No matter how high the mercury, how intense the 3pm sun on the concrete, how schwul-ish the air, he just keeps putting one foot in front of the other and walking on, and at a quite fast 'power-walker' pace. Charlie gets hot and sweaty but he just seems quite inclined to put up with it and do what he wants to do, walk, be it walking or riding, for miles.

(And I think I finally understand how those ancient Greek hoplites could march for miles and days carrying their bronze helmets, breastplates, greaves, swords, spears, shields, etc. etc., not to mention their packs with food, etc. etc.. Charlie embodies the meaning of 'soldiering on.')

And just as I learned (after 30 or so years) to swim because I had to chase Charlie around the indoor swimming pool, so I've found myself able to keep on going in the heat. I can't say I don't mind it or that I like it (the latter would be an utter lie), but, maybe the ol' genetic make-up is kicking in for me (as it clearly has for Charlie).

As a result of the latest round of hot 'n' humid walks with Charlie, I'm quite up for my morning rush down John F. Kennedy Boulevard, with the exhaust of buses, beat-up cars, and semis blowing us all in the face (there always seem to be people out and walking and some in suits and many women with hijabs); the trickle-drip of air conditioner condensation from apartments above; and full sun (which does feel intense when there's no trees save some poor scraggly things, under brick apartment buildings built a century ago and not always well up-kept, and workers clearing asbestos and who knows what in a powdery cloud, all amid litter of various sorts, sizes, and quantities). The afternoon rush-walk to get back to Journal Square to take the PATH to Newark and then the train home is a little more, ah, perspiration-inducing, especially with a Bag of Stuff. (Make that, actually, Bags, to 'distribute the weight evenly.')

Once again, Charlie and our life with him teaches one that one can endure, that one can do, much more than one might have thought.

Sounds like Charlie enjoys his daily exercise enough to put up with the heat! Dimitri is not so happy, currently struggling to do anything outside the house(I think he is mentally saying "I'm melting I'm melting!!").

All this despite being (slightly) less hot than previous years. And I'm not a fan of the heat myself either:)

I have certainly felt like I'm about to melt but when Charlie is there walking on, I've quite had to forget about it! The weekend doesn't look too good (95 on Saturday, sigh) but it may 'only' be in the mid-80s next week.

At least there was a breeze today---air-conditioning has not been working in the classroom we are teaching in.

The sun's not good for Dimitri too, is that right? Charlie, like me, can spend a lot of time in the sun, get very tanned, and be fine---very different for my (very blonde and blue-eyed) husband.

Similar weather here, I find I'm less tolerant of the heat with each passing year!

Yeah, because Dimitri has Angelman Syndrome by deletion he has less than normal pigment in his skin and eyes, so he burns rather than tans, also strange things going on with body temp regulation, which can be a problem for seizures - although he is seizure free for a long time now (knocking furiously on wood)