Eyes On My Back 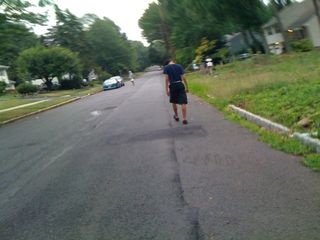 It seems that I have acquired eyes on my back.

Once upon a time, I used always to say that, for safety’s sake, I could never take my eyes off of Charlie, certainly when we where away from home at a store or other public place. If he wandered off, he wouldn’t realize that he had done such, or that I wouldn’t know where he was: Charlie would not know that he was missing. While he could say what his name was and what my cell phone number, he wouldn’t necessarily offer that information so a stranger. Even in our house, Charlie also required perpetual watching, lest he get into things he shouldn’t, start sticking CDs down a crack at the top of the staircase, etc., etc.. I was forever looking for Charlie, and at him. Of late, I haven’t been. It’s not that Charlie doesn’t need constant care. He can’t ever be left alone---underline, boldface, and italicize ‘not’ and ‘ever.’ Now that he’s older, when we’re at home, he can, to some extent, be ‘left to his own devices.’ Indeed, we’ve had some afternoons of late in which Charlie’s been watching videos on the computer, Jim’s writing emails, and I’m reading the Agamemnon to prepare for my summer school class. Too, these days, it’s not so hard to know where Charlie is and, too, what his mood is. He’s often humming or saying some word or phrase: Bingo, boy’s whereabouts identified. There’s also the occasional stomp (sometimes more of a stompfest). In general I’ve been thinking that too much scrutiny is more likely to fuel Charlie being edgy and even getting annoyed. He is older and certainly wants to be more independent----he needs his space. We’re very glad to give it him to the extent that it’s ok (much trickier when we’re out in public).

Plus, I feel so attuned to Charlie after all these years and all this time together, that I can sense where he is and, to some extent, what he’s up to, without turning around (when driving him in the white car), without having to actually look and see what he’s up to. I’ve developed eyes on my back.

Yesterday morning, my friend---he's an actor---whom I’m teaching summer school (a class in Greek drama) with---had us all walk around using our ‘back eyes.’ This was one of a couple of exercises we did that got us to ‘expand and contract’ our sense of where our bodies extended to, to feel and sense the space around us in other ways than looking directly at it. As I was walking (slowly) backwards and suppressing the urge to turn my neck to see where I was going, it occurred to me that, for the past year, such a---how to describe it?---mental projection of myself, of my energies, has been something I’ve been doing with Charlie as a way of keeping the peaceful-easy-feelingness in our household. Somehow projecting my own feelings of ‘peaceful-easy-Zen-ness’ has seemed to help Charlie. I think back to how often over the years (through most of the years of Charlie’s life), I’ve been anxious, tense, stressed, on edge myself, concerned about Charlie and his learning, SIBs, what might or might not lie ahead of him, not to mention a host of other worries---what charged vibrations was I shooting into the air of our household?

Not saying we live a totally peaceful and easy existence now. But we have become increasingly aware of how sensitized Charlie is to our feelings, to some kind of ..... psychic energy? .... around him. Words, speech, language not being the modes of communication most natural to him----that he's most comfortable with---no wonder that Charlie is so conscious of all the other ways we humans try to get our point across, through gestures, the way we hold our bodies, the ways we move around a room. Over time, it seems that we have learned both to communicate, and to sense communication, in the ways that Charlie does.

And it seems to be working. Perhaps Charlie himself appreciates the implicit, greater trust we've been showing him, the confidence in him wafting through the air? The knowledge that, yeh, we don't have to keep staring at him from the front seat of the car cuz we know he's ok? Maybe even a-ok?

Grumpy on waking on a day of hands-down terrible weather (humid, overcast and very grey, raining sporadically, hot), Charlie got himself out of bed Wednesday morning and the dressed, and then into the car with Jim. School went fine, Jim picked him up (I was teaching), Jim and Charlie went on a bike ride and got caught in a downpour and completely drenched. Charlie waited till I got home to use the computer to hear a couple rounds of Disney tunes (lately I've been feeling so conversant in these that, during my class, I was almost drawn into a discussion about the merits of The Aristocats---sure, it's not The Lion King but Paris with swinging cats, c'mon!). Charlie and I went for a walk in the same disagreeable weather; he was in good spirits and smiled pleasedly at some points. (I was the grumpier one; I do, not, like humidity.)

I always walk a few feet behind him, so Charlie's in my sight. Would he sense if I, or Jim, were not at his back?

After dinner,  Charlie was watching videos when he started crying. He stayed on the blue couch; I don't think it was the video in particular, though sometimes something can strike Charlie in a certain way and he responds as he does. I shot him a few glances (some very furtive) and went to cut up some watermelon in the kitchen. I said, 'I'm just cutting up some watermelon.' Charlie kept crying and I kind of stepped by the doorway that separates the kitchen from the dining room (which is where the couch is). I just wanted Charlie to know I was there and tried to send out some very gentle tendrils of 'yup, am here, not gonna get in your way unless it gets urgent.' I didn't say any of that, though, just something like 'feeling sad sometimes is very ok.'

It's not, of course, easy to stand by and hear your child cry. At this stage of his life, running over, throwing my arms around Charlie, crowing 'are you ok?'---these are not what Charlie wants.

And Charlie, after some long minutes, stopped crying and asked to see another video. And then, ran up to his room for a few minutes, and came back down for some soy vanilla ice cream. At some point, he also discovered that I had snuck two of his blankets into the washing machine. He wanted them out immediately, but stood, fingers fidgeting and folding into themselves, until I tugged them out and handed them---yes, wet---to Charlie.

I had a feeling that he had one more walk in him and, sure enough, Charlie put on his socks. Jim grabbed a bottle of water and out they went. The blankets were quickly whisked into the dryer and then replaced just as Charlie had them on his bed before he and Jim returned. Because, that's one way I try to tell Charlie, all is ok in the world.

Based on the alacrity with which he hopped into bed on returning from the walk and his smile, I think he got the message.

At least, that's what my back eyes told me. 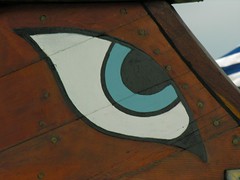 I'm reminded of the stern warning on the playpens, car seats and high chairs that my children used when they were babies: Never leave child unattended.
As a new mother, that used to freak me out. Never? Never, ever drop my guard for one moment or risk my babies being crushed/poisoned/drowned/annihilated? I missed being carefree and for years I felt anxious about my children's safety.
My hubby told me just the other day that his initial response on seeing a plastic dry cleaning bag in the bedroom waste basket is panic in case one of the kids were to find it and suffocate. Then he remembers that our babies are now 16, 19 and almost 22 and he relaxes.
It's frightening to have children out in the world, driving cars (even the 16 year old drives now) and going off on adventures without us. That parental vigilance never quite goes away and I never sleep well until all my chicks are back home at night, curled up in their nests.

Whenever I hear a baby cry I think it might be Charlie and then realize, oh, it's not him......

I am not a helicopter mom be nature and thus had to learn to be vigilant, since my kid could get in very creative & ER-visiting trouble as a tot. And, like Charlie, he's FAST! Once I learned to hover, though, it's been hard to unlearn those habits, now that he's almost 7 and graceful and not likely to crack his head open at the playground. At home, I tend to echo-locate him by toy sounds and stim talk. I agree that easing back on the mom-presence just a bit gives more Zen to our household...so it's becoming a new habit.