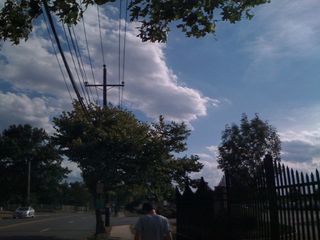 Charlie and I were driving in the white car after an aborted trip to Target late Wednesday afternoon.

Nothing of any particular interest, excitement, or controversy had occurred. I had picked Charlie up at school and we'd gone home, gone walking (far less humidity, still strong sun). It was a bit of a different day as Jim had gone into New York to speak to a friend's summer school class; Jim's been (yay) home a lot this summer and bike rides have become part of the daily drill/routine. I do think it's a good idea to shake things up a bit and do something different. Too much of any one thing, no matter how good or fun, etc., it is, seems ever in danger of morphing into a problem, an obsession for Charlie.

This particular Target is in the same direction as two places that once figured regularly in Charlie's past: (1) the office of the ABA agency that once oversaw his home ABA therapy; we used to go to the office for biweekly team meetings and (2) a certain diner that we used to eat in every week at least once, until Charlie (he'd been eating less and less of his hamburger and fries, and sometimes asked to leave within a few minutes of getting his plate of food) got very upset (a table and chair were knocked over----it was painful, and all the more so because the waitresses and owner had been very welcoming). As you may have gathered, we have not been back to eat there since; we've also decided to stay clear of driving in that general direction (a behaviorist from the agency occasionally observes Charlie at school but we've no reason to visit her office now).

We didn't have to go to this particular Target---one aspect/'advantage' of living in a well-populated suburban area in 21st century America is that there will be multiple Targets near you---but I figured, why not give it a try. I had two Target gift cards courtesy of my sister and next door there's a mega Whole Paycheck (with a huge stock of sushi) that we once upon a time patronized.

As we drove near, Charlie told me 'no' to Whole Paycheck (no, he doesn't call it that, but I knew he meant it from his using his generic word for supermarket). I said that we'd just drive into the parking lot and turn around. 'Turn around,' said Charlie. We did so, and headed back home.

'Uh-huh,' I responded while my mind raced to think, where would Charlie have encountered a giraffe---he's not into zoos---certainly not at the field trip to the planetarium Wednesday. Ridiculous thought, I know, but when I hear a word that Charlie rarely says, or has never said, I try to think if some new experience or encounter might be the reason.

And then Charlie provided what was in essence a clue. 'Photos pictures,' he said. By which I knew (based on past 'aha' moments) that he meant not just any old photos, and certainly not the numerous digital ones I am (as this blog shows) forever taking. He meant some old photos, like those he used to keep in an old Halloween ghost trick or treat bucket inside a beat-up neon chartreuse LL Bean backpack that must have been open once when water was around because most of those photos (some were the only copies) got all stuck together and damaged.

As Charlie had said 'giraffe,' I thought of the one giraffe that he had seen a couple of times, as there was a photo of Charlie in front of this giraffe on an old iMac.

It wasn't a real giraffe, but Geoffrey. As in, Geoffrey the Toys 'R' Us giraffe. There's a ferris wheel with Geoffrey decorating the ride-cars inside the big Toys 'R' Us in Manhattan. When Charlie was about 7 years old, my parents used to take him into New York and visiting Toys 'R' Us to ride the ferris wheel was something they always did. My parents took (of course) several photos of Charlie with them on the ride and I had uploaded them onto the old iMac, and Charlie loved looking at them.

I know he won't ever forget that ferris wheel. While it's been a long time since he rode it, there were a couple of times (when we still took Charlie into New York via the train and PATH and subway) that Jim and I got the sense he was trying to find the ferris wheel and lead us to it. A couple of years ago, the iMac---it was an original iMac---started to go and then it basically broke. Life was feeling pretty hectic then (for one thing, we were living with my in-laws) and I never made copies of the photos (I suspect my parents have some, somewhere). Charlie, of course, has those photos imprinted permanently in his memory.

Yesterday as I drove towards home, I talked a little about the photos and the giraffe and how we used to look at them. I didn't say 'ferris wheel,' as hearing that has the potential to set off a 'rides right now tonight' message in Charlie's head and Jim and I had planned that we might return to the carnival in the town we once lived in on Friday night.

Was Charlie thinking of rides, that he mentioned the giraffe?

Or was Charlie thinking of Jim in New York Thursday evening (something Jim has not done in a long time this 2nd 'Camp Charlie' summer), and of the the things he himself once did there?

I love the trail of clues from giraffe to ferris wheel to Jim in NY! Dimitri, although non-verbal, uses objects of reference or pictures in a similar way, somehow, if you know him it all makes complete sense. Often times I think Dimitri will use one object/picture to indicate he is thinking about a couple of things at the same time. To me it's all conversation:)

A Proustian "Remembrance of Thing Past" moment! Was Charlie eating a madeline by any chance?
Who knows what triggers memories? Just the other day I was cleaning a white wicker chair in my bedroom when I recalled a hanging lamp made of white wicker and strewn with little plastic blossoms (honeysuckle and tea roses) interlaced with tiny fairy lights. It sounds tacky to describe now but when I was eight it was the most beautiful object I ever saw, especially when it was lit at night.
Sadly, it disappeared soon after my mother put it up. There was never any explanation and perhaps I just stopped asking what had happened to it. Looking back at it now, as a mom, I think maybe it was considered a potential fire hazard.
I looked for a similar lamp on eBay but no joy.
I can understand how Charlie feels about his giraffe. It was great that you could place the reference for him.

@Jill,
And Charlie wasn't even eating anything from Whole Paycheck! Should i ever see such a lamp, I will let you know...... A little Proustian reference here:

@Emma,
Charlie does the same with using just one object/picture to refer to a whole range of memories and things.

Funny but we gave an assignment to the students in our summer school class to 'free associate' about a passage from a play---they are to perform the passages and my co-teacher (an actor) thinks free associating helps to memorize one's lines. The students seemed to find this challenging! (And didn't think it helps.) Maybe I should give Charlie and the giraffe as an example.

When you don't go back to a place where Charlie has had a storm, is it because you are concerned that he will have another? It sounds like he has done well going back to the supermarket of the Red Box Incident. When would you feel confident enough to try out the diner again?

@Louise,
Yes, we're quite concerned that he will have another, and I suspect he is too. We've continued to avoid the diner, for sure.