Here There Be Dolphins 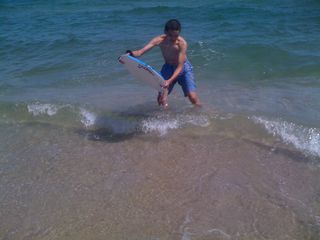 We had a little triumph yesterday at the beach and it wasn't of a swimming sort.

Charlie did have a superb time in the ocean (a bit more on that to follow), Afterwards, Charlie, in accordance with the latest routine, asked to ride the ferris wheel. We stopped for some sandwiches---I'm a vegetarian but I always make an exception for Jersey shore seafood---and went by the little amusement park by the beach. We parked and, noting the time (just after 5pm), started walking towards the ferris wheel which was very clearly not moving.

Obviously not a good sign---indeed, we found,the rides did not start till 6pm.

We asked Charlie if he'd like to go back to the car and drive around---no, the response. We talked about waiting and Charlie stood with hands under his chin and looked tense and worried. We mentioned the timer and he said 'no timer' and then 'timer' and I went back to the car to get it.

We've been staying for two weeks in August at the same lovely white house on this beach for the past five years. This year, we've decided not to: We did fine at the house last year but, for this year, day trips have seemed the wiser choice (except for the fact that our still less-than-a-year-old-car has an awful lot of miles on it). The beach house happens to be near a long row of parking space and we've been parking there and walking to the beach, the same one where Charlie really learned to boogie board and swim; as we discovered last week, at least one of the lifeguards recognizes us. Too, we recognize a couple of families who must have their own houses, as we've seen them and their kids over the years. We figured it will take some efforts to explain to Charlie about not staying at the beach house but he really did seem miss being at our our house last year; it's not (as suggested by our numerous day trips to the beach) not terribly far away.

Saturday, my thought was that Charlie was that Charlie was asking for the beach house so ardently as a way to deal with not getting to ride the ferris wheel. Perhaps he was thinking of our stays there and how we could just go back to the beach house, hang out, and try to back for rides? (Although, for the past couple of years, he has had very little interest in rides; we only went once or twice last year.)

Charlie continued to say 'yes beach house,' very insistently, as Jim drove back to it. We uh-huh'd and said 'yeh, yeh' in a non-committal kind of way, again (as I had on Friday about the position of the driver's seat) not trying to use a lot of words to explain things like 'the ferris wheel is closed now and we can go back and ride it at 6 o'clock' and 'this year we aren't staying at the beach house so we can just look at it right now but not go in.' We weren't exactly ignoring Charlie (hence the uh-huh's and 'yeh' talk)---weren't using the ABA principle of 'putting a behavior on extinction' by not responding to or, to be more precise, rather (here's the behavior-speak) not reinforcing it. (We were indeed reinforcing Charlie's requests with our uh-huh-ing.)

We've certainly done our share of 'putting a behavior on extinction' in the past. 'Stim-talk' like humming or repeating words over and over are prime candidates for such an approach. Head-banging is not---or rather (and this is from our experience with many years of dealing with self-injurious behavior and head-banging in particular; I am NOT a behaviorist and I'm sure we have made many an error in addressing SIB's with Charlie but it's one thing to be a behaviorist and another to be a parent (as a good behaviorist will acknowledge) and, moreover, in addressing Charlie's SIBs, we've most often felt that you just have to keep trying and working on it, no one really has the answer, end of diatribe!)-----rather, if a child head-bangs once, one might 'pretend' to not notice (i.e., appear to ignore) it the first time, in the (frantic) hope that one won't be reinforcing such an inappropriate behavior and it will just never happen again. In some cases, the child does not indeed head-bang again.

That not being the case for Charlie, we have had to address SIBs in other ways. Simply ignoring such behaviors would obviously be dangerous; the fact that you can't put them on extinction means that one must seek other ways to minimize and (ideally) eliminate them.

But back to the beach.

After a stop at a McDonalds that is located just a mile or so from the entrance to the beach (thank heavens, is my view now; I used to think it a major nuisance to see that golden M but things change), we had a peaceful ride home. The rest of the day was peaceful: A walk with me (driver---Jim---needs to rest!), consumption of a great deal of vanilla soy ice cream, listening to music, another walk with Jim before bedtime. The only thing that marred the peace was fact that, today being the Fourth of July, it was a major sensory challenge outside our house with fireworks going off left and right, extra cop cars with their lights flashing, many cars cruising by with windows rolled down (the better to blare out the hip-hop), motorcycles (including that of our neighbor two doors down) revving off into the dark, hot night.

Charlie handled all of this with aplomb.

Same with the ocean. Regarding which:

Once we got to the beach, Charlie led the way across the parking lot holding his boogie board. He ran in a straight line down to the water and immediately got out when Jim directed him to swim between the flags. Then he ran as if hell-bent (he was running as if he had a motor were propelling him) straight into an oncoming wave. He swam with much kicking and splashing and left a trail of white foam behind him. This was repeated at least a dozen times over, with boogie board and without.

On one of those rounds, an elderly man found himself diving into the waves next to Charlie. For a moment, they were swimming side by side, and then Charlie took off out into the ocean, on his back, head first and arms paddling (this latter was something we tried to teach him years ago---all in good time, all in good time, he gets things). He even threw in a flip As we stood on the beach, Jim sighted a dolphin and pointed far out into the waves, but, strain my eyes as I might, I couldn't see it.

The man who'd swam with Charlie came out of the water and made his way past us 'Oh to be young again!' he exclaimed to me with a big smile.

We couldn't help but to agree, and kept watching Charlie. Who, from the way he was swimming Saturday, could hold his own with the dolphins.

(And certainly, so long as he's in the ocean, with any teenage guys.)

Charlie looks ripped! Have the girls noticed?
Hope your day is peaceful and easy.

Uh-huh. He attracts attention these days, not only because he's 'different'!

Boy, I would hate for either of you to have to tangle with Charlie physically, or for Charlie to tangle with *himself*. He looks tremendously strong for his age - and this is before the real hormone surge kicks in.

Do you think Charlie could be a runner or competing swimmer? He obeys Jim's commands to stay inside the flags. Can he swim or run laps? He's a natural and gifted athlete.

It's really interesting that he can't stand hearing, "No," but will accept it through a quiet non-participation in his commands. Do you think it is because he is being distracted by something else? Or does he actually welcome not getting his way? You've used this approach to some of his driving commands, as well.

Does this same approach work in teaching him new skills?

One thing I would say about 'no' is that---the word has been said way too often to Charlie, in school contexts, therapy contexts, at home. The word has some very strong connotations for him.

I think he's relieved not to get his way when it's an OCD request and he's feeling caught up in an OCD box, and needs help to get himself out of it.