Home Archives Profile Subscribe
Stick With It
The Advocacy Habit 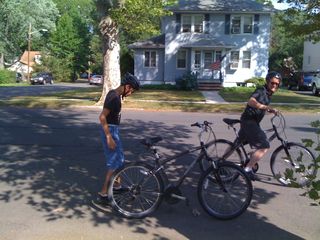 Thanks to Jill, Antonio DA, Barbara, and Melanie for your comments on Monday's post, Stick With It, in regard to the curious pattern in Charlie's learning:

'An initial big effort with a concerted output of energy, followed shortly by a request to be done with it, and now, and stated adamantly.'

Jill wrote referred to this pattern as a 'seeming lack of desire of autistic people to take action on other than one's own terms.' I think the word 'seeming' is key: While Charlie might, to the untutored eye, 'seem' unwilling to do some requested action, I think there's a bit more going on than meets the eye. As Melanie commented in reference to her son, I do think that it just takes Charlie longer (and often much longer) to figure out what is being asked of him; to 'process' and work through the instructions (especially when delivered in language) being said to him, and then to get his brain to get his body to do whatever he's being told, or thinks he is being told, to do.

Language---particularly of the spoken sort---just seems to be incredibly difficult, and taxing, for Charlie to figure out. He knows he is supposed to attend to what is said to him, but what is instantaneous for many of us (listening, understanding, responding) takes him several steps to carry out. And (as Barbara pointed out), Charlie is working through more 'complex mental processes' than 'simple stimulus-response': He needs time to absorb, think, plan, do.

When he was just getting started learning during his first ABA sessions back in September of 1999, it became apparent that Charlie seemed to catch on a bit more quickly when skills and tasks were presented to him non-verbally, and when he understood that he was to imitate the task. Indeed, one of the very first skills that Charlie learned to do was called 'non-verbal imitation with objects.' He learned to copy whatever we do using the request 'do this.' First it was 'do this' and dropping blocks into buckets; then, he learned (it took awhile) to imitate simple actions, like waving or patting one's own head. Gradually Charlie learned to see two actions done and then to imitate them, and also to imitate sounds. Imitating three actions in a row was harder. There was more, of course, to remember and often in doing actions #1 and #2, #3 would go by the wayside.

It was while teaching Charlie to imitate actions that I first started to notice how his versions of most actions were, or seemed to be, partial. If we raised our arms straight over our heads he would just hold his up with elbows a bit crooked. It was difficult to tell whether he was saying /b/ or /p/ or /m/ because Charlie did not round or move his lips fully when he was little. We learned about hypotonia---low muscle tone---and this helped to account for the seeming 'half-way-ness' of Charlie's actions and exertions.

Too, it occurred to us that, while we perceived Charlie not to be exerting himself fully, he might very well be---might very well consider himself to be, and be puzzled about why he couldn't get his body to do the things we were asking of him. When he was much younger, 'reinforcement' in the form of verbal praise, a tickle, a wind-up door, a toss in the air, motivated him. Now Charlie has a token board so he can track how many tasks he must complete before doing some preferred activity (the days of food and toys and other stuff motivating him are long-gone); sometimes, I suspect he just gets through his programs for the sake of completing them, having (to some extent) learned that finishing something is its own positive.

Antonio DA, mentioned what Donna Williams terms 'exposure anxiety.' I hadn't read much on EA: On her website, Williams defines it as 'the involuntary self protection responses of compulsive avoidance, diversion, retaliation.' What I found particularly of interest was her noting that someone with EA '

'..... can sometimes initiate/communicate but often only when the 'heat is off' and nobody is wanting/watching/waiting for their action or response (compliance to a prompt is not initiation) but some are compelled to avoid, divert, retaliate against their own initiations (akin to apraxia).'

That is, the seeming not-responding/not being willing to respond is not so much about what a behaviorist would call 'non-compliance,' but done out of an honest need to prevent one's self/being/brain/sensory system from being overwhelmed, by too demands, by too much stimuli. Certainly it's been the case that Charlie has one time done something very well (said a whole phrase perfectly clearly, for instance) and then not been able, or not seemed to be able, to repeat it again. And then one day, after a lot of gradual and persistent effort, he is able to say that word or do that action, according to his own command.

As am illustration to all this: Charlie and our long walks. Back in the fall, we started to note that an increase in (aerobic) exercise in the form of neighborhood walks seemed the best way to calm Charlie when in severe neurological storm mode. Charlie was initially reluctant to do these walks. Once or twice he surprised us by wanting to go on a long, long walk of 5+ miles rather than a little mile jaunt. Then he only wanted to do the short walks. Jim and I tried cajoling and coaxing him to walk for longer (so we could do one long walk instead of 4 quick hops) but Charlie was all 'no no no.' Then one day he wanted to 'go long' and indeed got really irked at me one evening when I told him we couldn't. Now he only wants the long walks.

And also the long bike rides, and the hot weather is no deterrent. It was in the 90s and very humid with an overcharged sun Monday. Charlie power-walked/ran when he and I went on a 'walk' (kind of hard to say we were walking, technically, we went fast) at 3.45pm, after which he called for a bike ride with Jim.

I have to say, I've been really admiring Charlie for what seems to be a very high tolerance for heat and generally unpleasant weather (with bad air quality Monday, too). Charlie never complains, just keeps soldiering on for block after block. This is the kid who wore this helmet for months (including last summer at his old school), and who once had a sore in his mouth for at least a week before a speech therapist saw it and we finally understood why Charlie had stopped talking, other than saying 'pee-ah-pee-uh.' If things were different, I guess Charlie'd be ok with wearing a football or lacrosse helmet, shoulder pads, jersey, etc., and scrimmaging for hours at sports camp under the burning July sun. 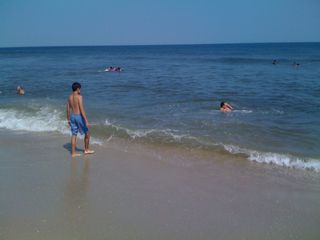 That said, as you may have guessed, the result of all of this exercise is that Charlie (and, um, Jim and me) are in shape. In Charlie's case, the more his physical abilities have increased, the clearer his articulation and the more extended, broader, bigger. You couldn't really say he's hypotonic anymore.

Often I think Charlie sprints or pedals at super-fast speeds simply because---having been a late walker (not really till he was 16 months old) and having to struggle to do things that many of us just do without trying (like talking)---he's kind of amazed, and pleased, that he can.

Thanks for responding to our comments in a post, Kristina - this will be so much easier for others to jump into the conversation stream.

No doubt in my mind that Charlie is in good physical condition with strong musculature that 'feels' firm (by simple squeeze of the hand).

There is no real objective measure of hypotonia and the 'measures' of the opposite condition, spasticity, have huge reliability problems. So, hypotonia is a term bandied-about without exactness.

I might agree with your title based on the looseness with which the term is commonly used. But real hypotonia exists in persons with Down syndrome. They have genetic differences in the neuromuscular junction that cannot be changed by exercise. However, persons with Ds can become quite strong and fit - as Charlie has.

Here I just want to clarify the difference between hypotonia and strength - which is also different from endurance and motor control (articulation).

In the end, all that matters is that Charlie is more capable, and happy. ;)

Thanks for that explanation---I've always thought the term 'hypotonic' was used very loosely. When he was very little, one ABA therapist referred to Charlie as a 'wet noodle' as far as him being rather, shall I say, languid in his movements.

He was not only late to walk, but didn't roll over consistently till he was 9 months old. He rolled over on his own at 4 months --- and then not again for 5 more months.

Thanks for getting me thinking this morning. I think Livie has similar issues with processing verbal information, and using verbal language. I'm thinking on how signing seems 'easier' for some; and that the use of communication devices as well helps facilitate communication. It's too bad that we can't use some of this voice recognition technology to translate the spoken language into some visual medium, to sort of reciprocate with either text, or even to stretch it, icons/glyphs on a screen. The good thing about thinking about these things is that in today's world, a lot of these things are in the rhelm of p'r'ossibility. Anybody know any good Ipad 'ap' programmers who'd like to take it on?

@Bill,
Now that would be a good assignment for those ap programmers.....

I frequently find my students are much more independent (and indeed, often faster) at tasks when left alone and "the pressure is off" so to speak.

The need to "perform" can be its own form of sensory overload, in my experience.

I quite agree with you---

Charlie used to be in a classroom (in another school) with a 1:1 teacher:student ratio. I've come to think that all the scrutiny played some part in his behavior problems.