In Which We Rent a Cargo Van 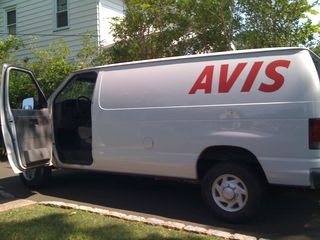 Because we've been wanting to bring the kayak back to the beach and, at one of his lectures about On the Irish Waterfront, Jim met a man who has a house down there and who very kindly said we could leave the kayak in his yard.

Due to the length and bulk of our kayak, we had concluded that auto-rooftop options were not in our (and the kayak's) best interest, hence the cargo van which, while lacking in every amenity that the sleek black minivan we rented when my parents visited, was (just) sufficiently roomy to fit the kayak and with the sort of under-elaborate (a little heavy on the unfinished metal) interior that can take sand and dirt, seaweed and cracker crumbs.

And, Charlie sat in the passenger bucket seat all the way down and up the Garden State Parkway.

Due to his hesitance--reluctance---initial refusal---to get into the shiny black minivan (and I've kept a comment from Adelaide in mind, that such minivans have 'institutional' associations---twice Charlie has taken a 'schoolbus' that has been, indeed, a minivan), Jim and I were not sure about Charlie in a white Avis cargo van. But, after a morning walk and a swift bike ride, Charlie got right into the seat that Jim directed him too. He only took his green worry beads and my set of keys, leaving his other things on the floor at home. On the first leg of the trip, Charlie was quite serious, carefully taking in the different view from the front window before dozing off almost until we got to the beach.

On the way back, Charlie had quite accommodated himself to being the guy in the front next to dad and shot me a couple of 'hey you back there!' grins.

Obviously, the van and the view from the front seat were sufficient to render our usual weekend beach trips different, a good thing, given Charlie's tendency to get stuck on things 'always having to be so' and then becoming distressed when things are not. Due to the hubbub about loading the kayak, paddles, kayak seats, and beach gear, we forgot to put in the boogie board (Charlie himself usually loads it into the white car; I think the oddness of Saturday's transportation led to him, too, overlooking that piece of equipment). So Charlie's usual beach routine of starting with boogie board rides and moving into swimming was upset and he at first didn't seem to mind. Then, after his first swim and Jim's and my 'swim between the flags' reminders, he started moaning and spent 12 minutes pacing on the sand in a not very happy way. We took turns swimming---the water was warm---and eventually Charlie ventured back in and swam in his fish-way, going straight out to meet the waves and body-surfing, and making sure to turn his head to check in with us. 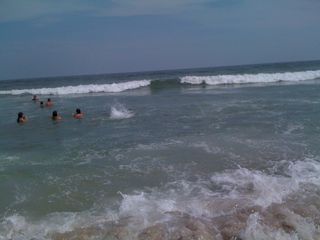 It was high tide when we first came and there was much more of a current than last week. I rather think this was the main thing that irked Charlie who (perhaps?) expects the ocean to be as he left it the week before, and last week's waves had been very different. He adjusted and, truly, that's the great thing about swimming in the ocean versus a swimming pool: The conditions are never the same, even from day to day, and Charlie (if he wants to swim, and he seems always to wish to) must adapt.

Before leaving the kayak at the house of Jim's friend, we took it for our inaugural 2010 kayak outing. It was quite warm and, after about 15 minutes, Jim paddled back to shore and I waded out through the seaweed to take Charlie's shirt and then swim he did in the cove near where they'd cast off. Jim paddled around and Charlie disappeared under the water (which was quite shallow) several times, and once on his back. 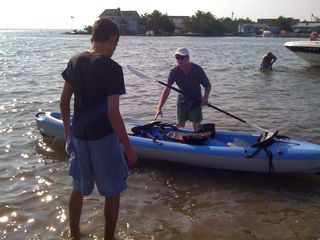 We were all a bit overheated from a fly-bringing land breeze, a lot of sun, and some grit and gravel. An impulsive visit to a CVS---it's where, when we've stayed at the beach, we used always stop to buy things like shampoo, paper towels, and plastic garbage bags---was curative. Charlie smiled hugely on pulling out a box of Saltines and Jim and I searched through the refrigerator case for Snapple, which appearsedto have been supplanted by energy drinks in flavors fruity and tea-ish (we managed to find a few Tropicanas). Charlie went through one whole pack of crackers on the way home in his co-pilot seat and he was really smiling much of the way,

A quite fine way to conclude Saturday's kayak caper.

With the kayak now housed near the water, I suspect they'll be quite a few more. 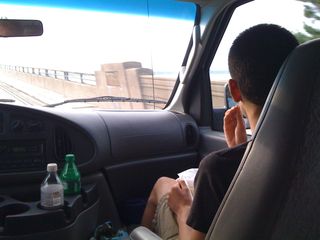 Love your observation about the variability of the ocean and thus the need to adapt! Keen eye on everything as ever. Enjoy the sunshine!

There's been quite a lot of sun this summer, have to say! Hope you're all having a really good one!