Well, what else would I be? 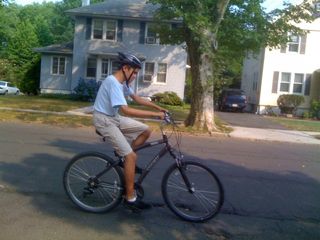 I started teaching summer school yesterday: I'm co-teaching a class on ancient Greek drama with a friend who's an actor. We're teaching one of my favorite works of literature, Aeschylus' Oresteia and two comedies by Aristophanes, the Frogs and the Birds (which I'm also extremely fond of).

We got things off to a good start by going around the room and having everyone give themselves a new last name that said something about she or he was. The students seemed a little puzzled and I said that I could say I am 'Kristina Mother,' as that's how I more than definitely identify myself as  (not that I would have believed it when I was the students' age---they are all in high school). Indeed, I had already told my students about Charlie as, due to his surgery Thursday morning, I have to miss class.

And I as quickly said, 'but I'm not gonna say I'm Kristina Mother' (for the purposes of this exercise). I ended up saying 'Kristina Blogger,' as a bit of a nod to having passed my five-year blogiversary mark last month. This, though, soon morphed into 'Kristina Technophile' when I mentioned my predilection for technology, computers, and much more 'geekery.' Too, the latter word is from two Greek words---technê means 'art, craft' and philia means 'love'---and so seemed more than apropos.

It did occur to me that my summer school students are just a few years older than Charlie. Sefore too long, my students will be the same age as Charlie and then younger. I got my first teaching job in 1995, two years before Charlie was born, though Charlie has been 'with' me truly for most of it: By the fall of my second year in that job (teaching Latin to middle and high school students at a prep school in the suburbs of St. Louis), I was expecting Charlie. In fact, the day I went into labor, I fielded a call from the middle school principal about the status of my final exams. Intentionally or not, my teaching style always has a maternal cast to it with me (probably sometimes a bit overbearingly) seeking to communicate that, yes, I care about each and everyone one of my students. I know that sounds mushy, but it is the case.

Also, I seem to have reached a point in my teaching career that is a bit 'WYWIWYG.' By which I mean, I am pretty much the same person and personality in the classroom as I am out of it, and the same with my students as I am at home with Charlie and Jim. Lively, high energy (and not just from the coffee), organized (though not in the most obvious of ways), rather silly and even light-hearted (an attitude which I think helps in the face of teaching dry, imposing subjects like the passive voice of Latin verbs), well-stocked with lots of information and material and writing so much all over the dry erase board my hands get colored in different-colored marker. I'm never been one to stand behind the lectern and drone on.

The years I spent teaching Charlie numbers and letters and playing with blocks and coloring have left their mark on my teaching other subjects, and other students. Charlie has always learned best when his teachers have been quietly positive and supportive---he gets alarmed when the cheering is too loud and elaborate---and project a gentle confidence, even when the going gets rough and I've tried to maintain this frame of mind and spirit wherever, whoever, I teach.

Too, I'm reminding (steeling) myself to send just such 'you can do it, you can' vibes tomorrow morning around 6.30am (which might the very time you're reading this), when Charlie has his dental surgery. After the preop pediatrician's appointment and the ridiculous record-breaking heat on Tuesday, Wednesday was more of regular kind of day. Charlie had fallen asleep quite late on Tuesday and was just waking up as I left and ran (literally--wanted to get a ticket before boarding the train) to the station. Jim got him to school easily and Charlie had a good day until (as on Tuesday) about 1.30pm. His teacher speculated (very aptly) that he may be upset as the big exercise ball that he likes to bounce on broke: Charlie is still doing his share of stamping and stomping indoors and I can see the ball providing a way to let out all that energy out.

The rest of the day passed in a very ordinary way, with a bike ride (fast and hot), computer time (internet a bit balky), a ride for some soda ('diet Mountain Dew' has become an occasional selection of Charlie's now--ugh, but whatever), a walk---during which I felt a breeze that was a bit cool. Earlier in the afternoon it had been 109 degrees in the white car when I got into it after work to pick up Charlie from school (Jim had left the car offfor me in Jersey City after dropping off Charlie): 96 degrees now seems 'cool' after the blasting heat of Tuesday.

Amazing what you can accommodate yourself to.

I have found myself much better able to handle the heat. I think it's because we've been outside in it, no matter what the mercury says. Charlie seems to be able to put up with being out and active (really active) in hot and humid sunlight and so out Jim and I go too, with water bottles. Before Charlie, I wouldn't have ventured out at all, electing to stay inside and read and drink coffee (of course). Seeing him walking steadily, if sweatily, ahead of me, I've found I can take the heat much better than before. Yet another lesson learned, courtesy of Charlie.

Who by the way, got himself to bed, as hoped by Jim and me, at a reasonably early---9.30pm hour---after a careful read-through of the Dental Surgery Social Story his teacher had put together from him. He really does seem on the same wavelength as us.

Thank you again from Charlie and from us for your kind wishes. Yes, I've got his paperwork already packed in my bag.

The years where my students were a year older, than the same age, then one year younger than my bright boy hurt, but that pain grew less over those three years; part of the hurt was getting the guardianship and accepting that he wasn't going to make as much progress as we'd hoped for. It doesn't bother me any more; I'm just delighted to see that my son continues to grow and learn at his own pace.

I hope it all goes well for Charlie and you - i know how it feels!!

Thinking of you out here in California -- hope all goes well.

Did great! Thanks so much to everyone!

Glad to read via Tweet that it went well.

Just saw this. Glad to hear that all went well!