Language Is Just One Kind of Communication 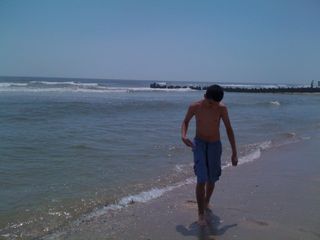 The clunky title of this post sums up one of the greatest lessons I've learned in life with Charlie.

But as I've tried to indicate here, language isn't the form of communication that Charlie is himself the most comfortable with; that seems most 'natural'---for lack of a better word---to him.

Which is not at all to say that Charlie does not communicate, or that he does not want to communicate. He's always had the intent to communicate. When he was 2 1/2, a speech therapist/ABA therapist showed him how to use modified signs to say 'I want chip' and 'I want cracker.' Charlie learned these quickly and, too, that if he said certain sounds, he got what he asked for. As could not yet say final /t/ or initial /ch/ or initial /cr/ or /k/ at that time, we taught him to use approximations ('uh-uh' for 'cracker; 'ip' for 'chip'); over the years, Charlie learned to replace these with the actual words.

While Charlie now seems able to say most of the sounds of American English, he still speaks only in those one or few word phrases. At any one time, his working vocabulary does not seem to very large. And pretty much every word that he does say is something tangible, some person, place, thing, or an attribute thereof---is a noun or adjective. We've worked on teaching Charlie verbs, prepositions, pronouns, and articles but he very rarely says any of these in part as a matter of economy (why say 'I want to eat watermelon' when 'watermelon' gets quite the same point across---what else would one do with a watermelon besides eat it). Too, there's that question of how many words Charlie can 'retrieve' at once; if he's not able to call up more than a few, I would suspect he'd stick with the ones that most efficiently get his point across.

I rather wonder at Charlie's ingenuity at finding other ways to communicate. Music and singing. Humming and other non-verbal uses of one's voice. Arranging things, from his worry beads and iPod touch and a few other items, to food containers and plates and various other colored items. His gestures and body language, from the way he holds his shoulders to the set of his facial features.

To many, all of these might seem to be, well, singing, humming, curious arrangements of things. One does have to presume that Charlie is, in his various ways, communicating---take that leap of faith---and try to translate his communications, knowing that there is no dictionary or grammar. No textbook.

The 'communication needn't be all about language' point was in my head yesterday as Monday's summer school class had started with a lecture by an anthropology professor about 'what makes us human?'. The students were put into groups and asked to answer that question and, as we went around the room to hear their answers, I was struck by how often talking, speaking, thinking, having ideas and abstract thoughts were mentioned.

I thought about how, once, I would have answered just the same. But that was before I had my own boy, and he didn't 'just start talking' like the pediatrician said he would. That was before I put talking aside and watched Charlie to try to figure out what he was saying through behaviors (those head-bangs, those taps on flat surfaces) and the sounds, the not-words sounds, of his voice.

Me being someone who's extremely fond of languages, of learning as many as I can, and of writing and reading and talking and all of that, understanding Charlie and, in particular, Charlie's communications, has been a daily effort, albeit one with many a 'eureka' moment to balance out the 'now what does that mean' times.

Being so fond of languages, and of ancient Greek in particular, I was quite---very---glad to find myself in an extended discussion with a student Monday about ancient Greek prepositions used as prefixes in compound verbs, and the orthographic and pronunciation changes that occur in the imperfect and aorist tenses. I've been teaching this student ancient Greek in a tutorial, which is the best format to find oneself having to pull out two dictionaries, one ancient Greek grammar, and two textbooks to approach an adequate answer to said student's question.

In the midst of all this, I confess that I started to get the fuzzy-headed feeling, and quickly mentioned to my student that waking at 4am with Charlie had something to do with this.

We hadn't been surprised that Charlie had woken early as he'd gone to bed by 7pm on Sunday. Charlie waited an hour with the timer on Monday and then really really wanted a walk. I grabbed my sandals and out he and I went and was it worth waking at an early hour, as the air was positively cool and sweet. Charlie celebrated by running at top speed down our street.

He waited most patiently in the car for Jim and me and smiled good-bye when they dropped me off at the train, and smiled again when Phil Schaap came on the radio. Then Charlie had an 'off day' (as his teacher me over the phone) at school; he just wasn't himself and sometimes was visibly leaning onto a big exercise ball and pressing down his stomach, which seemed to be bugging him. He was ok when Jim picked him up and on a bike ride, and then, around 6pm, crashed on his bed almost till 7.30pm. Charlie was slow to wake and then immediately wanted a second bike ride; I got out the bikes and away sped Jim and Charlie. Once back, Charlie had a late, big snack/light dinner; typed on the computer; announced that it was 'bedtime' at 10.45pm and, nap or no, was out by 11.30pm.

I doubt I'l ever be able to learn the full extent of the grammar, lexicon, and idiom of Charlie's communications. In the meantime, I remain a most ardent student of his native tongue.

What conversations is he having with you? What sort of exchanges?

How would you say his regards for other people's wants, as well as his own, have developed over time?

I was just reading Temple Grandin's Thinking in Pictures and she talks about never understanding the use for any words except nouns. Since my son is only five and is largely non-verbal, although he does say words for what he wants, I read things like this post, and TG's books to try and put together in what ways our son is communicating with us. You can't ever know what it means to me to be able to read this and get some insight. Thank you.

Ah, how this all resonates with me today!

So interesting -- we've had words come and go, and a comeback of words this spring... but the collection of words that came back first was almost all verbs or motion-related: open, pop, poke, down, on, jump, peek, go, bye-bye. Such a variety of paths!

@Louise,
Charlie's just so much more aware of us and others and what we're doing, saying and feeling; good at waiting too (for instance if he's ready to go to school and we're still rushing around to get our things). Our conversations would not seem to be such to some, I suspect---sometimes it's Charlie saying a string of words and we repeat them back and thus validate what he says.

@JoyMama,
Charlie said 'open' for awhile but then he started mostly just to say the nouns---maybe an example of him using 'telegraphic' speech?

@Joanne,
Thank you so much---I also really like Grandin's 1st book Emergence. I suspect Charlie often has very distinct 'snapshots' of images in his head about places, things, people; sometimes I think he's gotten upset when what he sees isn't the same as the 'snapshot,' in a moment of cognitive dissonance. --- Charlie definitely not only talks a lot more than he was younger, he also understands a lot more of what is said around him. He really is very communicative now, though he tends to 'over-use' one or a few words to mean a whole range of things. It also helps that we've become much better listeners--if I can't figure out what word he might be saying, I try to listen for the vowels for clues.

@Niksmom,
I was thinking, a good 'thought exercise' would be to ask my (college) students to take 10 minutes and not talk at all and see what they can communicate---how little and how much, and how creative one has to get!

My son uses telegraphic speech a fair amount. And as you mention, body language and facial expressions say a lot, too. I'd say he's "fairly verbal" in that he can speak with great repetition if he thinks it'll get him what he wants, but his speech is definitely non-standard and unclear unless you know him. We've always had to be very tuned in to his mood, health, and other non-verbal indicators to really understand what is going on with him. I call it the "psychic mommy network"!