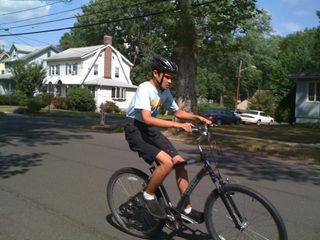 Charlie's teacher noted that he used the self-check to check out his groceries on his class's weekly grocery store trip Friday.

That little note made me very happy.

The thought of Charlie able to do something so basic and essential to taking care of himself just really excites me. There is so much that Charlie is not able to do---like knowing that he's in a bad situation and figuring out how to get himself out of it in a way that doesn't involve hurting himself---hearing that he can do something like check out groceries he's gotten with the aid of a shopping list: It's a big wow.

Another was the way he held himself together on Friday afternoon, in the midst of anxiety and discomfort brought on by his stomach bugging him. Charlie had had a good day at school, though he seemed a bit irked that the person driving the white car (both there and back) was yours truly, instead of Jim, who'd had to go into New York to do some work. (I've done the lion's---lioness'?---share of the dropping-off and picking-up over the years and I'm quite glad to hand over the title of Parent Chauffeur any time.) We stopped at a convenience store for snacks and I successfully, and quite easily, persuaded Charlie that two brownies were sufficient (a boy can only eat so much cake, or cake-like items). Jim got home shortly after we did and he and Charlie went on their usual bike ride, after which Charlie came inside, took off his bike helmet, and stood looking at us expectantly, saying 'I want.'

We ended up back in the white car. I had a feeling that Charlie wanted a long ride, or wanted to go to the local fair we've been patronizing. The rides wouldn't be open till later in the evening, though, and random drives hither and yon just to pass the time have lost their charm for Charlie (a good thing, I think). I needed to stop at Walgreen's so we drove there, with Charlie saying a string of 'no, no, no' and me 'uh-huh' and 'uh-hmm'-ing it. We passed through the drive-through pick-up line at Walgreen's and I continued to drive 'local.' Charlie didn't say 'that way' or 'this way'; his eyes flickered rapidly from side to side, from window to window, and he wasn't smiling. He said 'no' to any stops and, without further ado, I drove us back home, we got out of the car, Charlie and I went inside, he took care of business (i.e., the reason he'd looked less than at ease from the time I'd picked him up from school), I felt quite glad that we'd not attempted any long rides.

I thought about the one thing I think I've learned this year: For whatever reason, when Charlie is really asking and asking for something in an obsessive, anxious way and looking haunted and strained, it's best not to actually get him whatever it is. It's perhaps as if he is testing Jim and me, seeing what we'll do, and (perhaps again) all wound up in his thinking is that tiny thread of trust, that we're going to make some sensible decision that doesn't involve getting him what he's saying, and just go home and rethink things, because home is home---the best place for neurological storms, though July has not been a very stormy month for us.

(Though, alas, the autism news in general this summer has been really really tough.)

As the sun was going down, Charlie requested bike ride #2 after which we went---you guessed it---to the fair. Charlie made a beeline for the DropTower. This being his fourth time on this Frog Hopper on hormones, he had the routine down of where to wait and how to seat/harness/whatever you call it down and fasten the buckle. He smiled for the first time going up and, after the ride had dropped speedily down in one straight swoop, undid his belt, gave himself a bit of a shake, and got up and went down the stairs to the grass. We over to stand in line for the giant slide (and to get bit by many pesky mosquitos). Charlie always likes to wait at the top for the other kids to go down (three people can go at once). He stood watching with his hands tucked under his chin, then got on his burlap bag and went down quite speedily.Then he wanted the car.

We got home before 9 but it was almost 10.45 when Charlie went to bed. He listened to music for awhile and then got up and stood next to his shoes. 'I want' was said several times. We were quite sure that Charlie wanted to ask for a walk but it was too late. I answered 'yes yes' to Charlie's 'I want' 's and we went round and round with that for a couple of minutes, neither of us saying the word on our minds, 'walk': Just saying the word (even if preceded by 'no' as in 'no walk') is enough to set something going in Charlie's mind that means a walk is--must--will happen, and it's impossible to persuade him otherwise.

Then Charlie said 'bedtime' and, after grabbing his blankets, ran smiling up the stairs.

He has been testing us, and I'm happy to say it.

A happy high-five from me over the independence in the checkout! That is quite a complex task and from reading here, he obviously understands the meaning of the checkout, too.

On another note, I agree with you, awareness has always seemed to me to be a low goal, oversold by those who sell awareness.

I can't even use the self-check...that really is a quite an accomplishment. Good for him.

Sounds like a great day all around. My only question is about your plan to deflect him from his insistences when he figures out that "uh hum" essentially means "no"? Will he just put on his shoes and go for a walk without waiting for you to participate? Right now, he is still "tethered" to you - do you foresee the day he takes that step alone out the door, that severing?

There are plenty of other words to introduce Charlie too once 'uh hum' stops 'working'!

As I've noted before, I think it's highly unlikely that Charlie will be able to do something like go for a walk on his own, due to issues of safety.