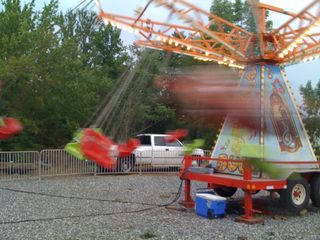 Yesterday I was reminded how far outside of mainstream popular culture is the world in which we live.

I was at work, attending two presentations by guest lecturers. The first was on diseases of U.S. Presidents: Did health issues ranging from throat cancer (Ulysses S. Grant) to obesity and cancer of the mouth (William H. Taft) to polio (FDR) to Addison's disease (JFK) have an (adverse) affect on the fitness of Presidents to govern? How open were the Presidents about their illnesses?---Not very, the lecturer noted. While depression was mentioned a few times, mental health---Nixon having been possibly bipolar and/or manic depressive, it was noted---was brought up quite quickly and then another topic referred to.

Jim and I have been suspecting an additional diagnosis of bipolar disorder for Charlie. Certainly he can be Mr. Mercurial, with dramatic, extremely fast mood changes and every couple of weeks he seems to have an absolute thirst for lots of intense exercise, while sleeping very little. As you can see by my just having written what I did, we're hardly clandestine about such concerns. True, Charlie's health doesn't have an impact of world events or US politics but I still think it's important to be open about talking about mental and neurological health, and about letting go of any shame or stigma surrounding it.

Anyways anyways. The second presentation was about making movies, and specifically science documentaries such as you might see on TV or at a science museum. This presentation was, not surprisingly, graphics-and media-rich and, listening and watching, I really felt like a Martian on planet American pop culture:

2) This is not to say that we are media-deprived. Quite to the contrary, the three of us get liberal dosings of YouTube and news and the like thanks to the Internet and the too-many laptops and electronic devices in this household.

3) We actually have a TV set but it's broken and in the basement.

4) We also actually had Comcast once upon a few years ago but they somehow gave our box's number to another customer, our service only worked sporadically as a result, we weren't even living in this house at that time so we just let it go until we realized, hey! Talk about getting gypped! But the day-to-day of life made us take the simplest route: Cancel Comcast.

5) My first reaction about a clip from House was hey! Since when have two residents ever come to see Charlie to figure out what the problem is; we're usually lucky to see a doctor in the ER for all of 7 minutes, in 4 separate intervals.

6) I know the Internet is rife with clips of X-rated stuff that anyone could stumble upon but my goodness, watching an opening sex scene (between two 'college students' in a very tidy and large dorm room) on the House clip made me feel that there are some things I'm glad I don't have to explain about to Charlie, at least not yet.

7) Seeing a clip  from Warehouse 13 when 'Joshua' appears after a young woman starts coughing and going into a bit of a 'state' made me think, feeling a neurological storm surging in Charlie is a total lot scarier.

8) Having dealt with said neurological storms in our car (occasionally when it's been moving), a scene from Trauma with a bus crashing into an ambulance was not going to be my favorite. And the scene was shown again and again to show how the sound effects were created....

9) Charlie has never seen an IMAX movie and won't be for the time being. Movies in 'regular' theaters, not to mention the theater itself, are pure sensory overwhelm-ation for him.

10) I'm not sure that Jim has ever seen an IMAX movie either. I don't think he really wants to.

I have, but I can take it or leave it.

I suspect I sound like a curmudgeon. If things were different for Charlie, maybe we would all be visiting science museums regularly and I'd be installing a parental control filter on Charlie's computer. The three of us don't seem to have a need to watch shows or movies that look 'almost like real life.' I guess we just kind of go straight for the real thing.

And as it was noted in the second presentation, many of the structures in sci-fi- and 'science-y' films are made of plastic and foam and paint---they're not real, themselves.

There's a reason Charlie likes the ocean and has been saying a definite NO to the swimming pool. He does like to watch some clips on YouTube but mostly he seems to like to go out into the actual world and walk, bike, and have a look around.

If we hadn't been out Monday afternoon, he and I would not have spotted a ferris wheel rising above some trees a couple of towns away. After Jim came home and did a bike ride with Charlie, we went back to ride 'Big Eli' which turned out to be part of a carnival at a local festa, complete with a 'sing like Frank Sinatra' (Sinatra Idol?) contest and lots of good Italian food (Jim got some calamari; I was inclined to think that the Oriental Bar-B-Q and the Taste of Greek booths---the later staffed by some quite non-Greek looking persons, the former empty---were to be bypassed). Charlie did his favorites, that ferris wheel, the giant slide, and the swing, which was good and long and whipped him smiling around so fast he's just a blur in the photo above.

That really was what he looked like on that ride, though also with a very genuine, gleeful smile. He's just moving too fast for us to see.

I love your last paragraph; it's beautiful.

thank you, Kim! I tried really hard to catch Charlie 'in flight'---he had that smile that says 'I'm where I need to be'---that smile one wishes one could preserve forever.

Interesting that you mentioned bipolar disorder. Some researchers think there having a bipolar family member is one of the factors that predisposes a child to be diagnosed with autism.

Very interesting----Last time we were at the neurologist, he said that some 'manic-ness' is part of autism (not a formal diagnosis per se, that is).

"I'm where I need to be" Don't we wish we could have that kind of zen ourselves. And I think it' precisely because you guys live so in the moment with Charlie (and not with a tv).

We went back for rides tonight and Jim got on the swing too---a very good way to 'be' with Charlie.

Nick does some interesting google searches online - I have signed out of you tube so he cannot access stuff, but seems he wants to see graphic stuff.

We just got a laptop from another parent whose son graduated HS and it is about 10 yrs old, thus far Nick is learning to use the touchpad.

I decided we will get a Wii for Christmas this yr, get Nick some physical activity and be up to speed on some technology. I have tracfone so no clue on iphone and use a san disc and not an ipod.

I started taking Zumba classes and told a few people that I felt like Lucy Ricardo at a show at Rickys nightclub. All I needed was a big fruit thing on my head and more reddish hair.

I do have a Kindle, but forget where I hid it last yr so Matt could not access it.

Ha, I've never done Zumba but I can sure picture Lucy with the fruit..... I felt like her today at the beach as I ran in and promptly got wiped out right in front of 2 people.

Sometimes I feel it's a (mixed) blessing that Charlie can't read or type more than a little---he's not inclined to search for things beyond certain kid TV shows.

He's used a Wii at his old school and was kind of into it; always seems to prefer actually going outside and running (yes, I would rather remain inside with the AC, it has been so hot!).

You're not missing much. I kind of miss the ages I went without television. In college I hardly watched the stuff except for X Files. And when I had a television I just used it to play video games until I figured I could get a few blurry shows.
It's amazing how annoying a show can be, but you'll still watch it KNOWING it's annoying you.
I am trying ot break out of that.

Avatar the last airbender is a very good show. Plus THE CHARACTERS ARE ASIAN. And many of the men look like Kaoru.
But, if it wasn't for So You Think You Can Dance, Bones and House and Criminal Minds I would not mind being televisionless if books would stop letting me down.
Because there's always great music. Especially on youtube. I discovered a great, but possibly a bit... weird musician there.

The time we had a working TV set + Comcast, I only watched the Sopranos, with Jim. And he pretty much only watched ESPN!

Charlie showed extremely little interest in any shows. Mostly he wanted to see the same videos over and over---truly, having the TV seemed to over precious fewer dividends than not.

'It's amazing how annoying a show can be, but you'll still watch it KNOWING it's annoying you'---that's precisely how I've felt the timed I have watched TV when staying with my parents. Internet surfing remains my preferred 'brainless' activity.