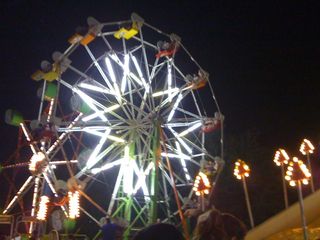 The carnival was very crowded, for Friday was the last night; I had time to get two (ridiculously overpriced) cans of diet Coke while Jim and Charlie stood in line. It was dark and everything was lit up and I was thankful Charlie was wearing an orange shirt, as this made it easy to spot him amid the masses of people.

We'd known this wouldn't be a night like those we'd had earlier in the week when we encountered a flashing red light and a line of cars when we were still a mile away from the carnival grounds. Jim pulled into a side street and we left the car in what we hoped was an ok place and, though we were walking at a pace usual to ourselves (the pace we walk on walks with Charlie), we passed everyone, making our way at one point through a cordon of motorcycles that were all (blessedly) immobil.. Charlie and I breezed past a row of orange cones and a man in a reflector vest who said 'two kids and one adult?' to Jim---we hadn't had to pay admission earlier in the week. I should have just kept walking with Charlie, but turned back to say, 'I'm 41.'

After Jim and Charlie got their seat on the ferris wheel, it was several minutes before the actual ride started as the wheel turned slowly so that one set of passengers might disembark, and some new ones take their seats. I had gone to stand vaguely near the line of the giant slide and from there beheld Jim and Charlie slowly making their way round the curve of the wheel. Then the whole apparatus was set in motion and they must have gone around some 20 times. At one point, a green burst of fireworks burst behind them.

Charlie's ride down the slide was very fast. Amid people, loud singing in the manner of Melissa Etheridge from the stage, booths and garbage cans and smoke issuing forth from grills for barbeque and burgers, Charlie followed Jim to the swing and got the last seat. He was on the inside but still got the full effect of the ride, still had that 'I am here, this is what I need' smile. That was the last ride and we gave away our remaining tickets to two younger boys whose mother was pushing a big stroller.

Charlie had not had a peaceful day. He could not sleep till 1am Thursday night and, at school, was clearly uncomfortable and unsettled and, eventually, plainly highly agitated for the whole morning and into early afternoon. A class trip to go grocery shopping had to be rescheduled and the other students were also not at ease. When Charlie got home and sat to use the computer, the video must have stopped about every 10 seconds, due to a phlegmatic internet connection. He gave up on it and went to his room and came down around 5pm for a bike ride with Jim, followed by a walk with me, and then we went off to ride that big wheel one last time.

I'd gotten irked earlier in the day myself and wrote this (the post below) to expunge my annoyance. The afternoon posting (Charlie was still at school) worked and, once back from the intensely over-stimulating and equally fun experience of the carnival at night, as Charlie checked out what was to be had in the kitchen and Jim sat down for a well-deserved rest after 10 fast bike-miles in 94 degrees and a lot of driving, I read Nox, my favorite writer's latest book---much more on that later.

Nox is Latin for 'night' and lux for 'light'; et is 'and.' Nox et lux, night and light, night together with light, I think this is not the first time I have so described our days, our nights. 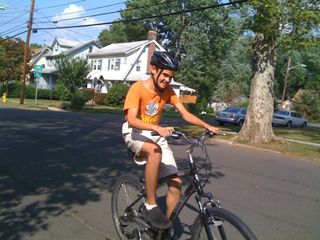