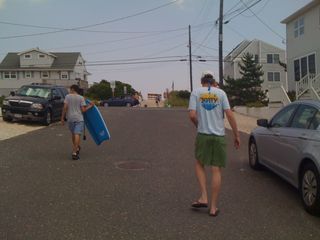 Terribly slow traffic on the Garden State Parkway Sunday meant that it took us almost three hours to get to the beach and so, when Charlie asked for a towel after swimming for some 12 minutes, Jim and I hemmed and hawed.

It's a pattern we've seen in Charlie before, from the time he was very little. An initial big effort with a concerted output of energy, followed shortly by a request to be done with it, and now, and stated adamantly.

I can still see Charlie (indeed very little) sitting at his blue plastic table in one of those stubby purple plastic chairs we still have (currently in the living room; Charlie placed them there and it's not unknown for me to plop myself into one). There might have been three flashcards with different letters of the alphabet in front of him, or three sight words, or maybe the two chairs were placed facing each other so a therapist (or me) could sit in front of him with a list of sounds to practice. Often the data sheets showed that Charlie had initial, easy success with whatever he was learning, followed by a gradual dip that sometimes became quite pronounced, followed by days and weeks (sometimes months, occasionally years) of reviewing what the skill was (the letters of the alphabet, reading sight words, saying initial and final /f/) of effort. Whenever Charlie at long last 'mastered' a skill, he would often have it down really, really well.

It just seemed to take forever. Too, that first initial burst of success often felt so misleading, especially as Charlie struggled to retain what he'd been taught; to repeat what he'd first seemed to do so readily.

Over time, we've come to accept this as the arc of Charlie's learning, and to work with it. Never ever giving up has been essential, as had always projecting a message of support and patience, with a strong dash of 'you can do it'; of confidence that Charlie can get over any hurdles.

Hence, on Sunday, Jim and I knew if we could wait Charlie out so that (while standing on the beach, poking his feet in the sand, enduring us slathering more sunscreen on him) he could work out whatever had made him feel he needed to beat a hasty retreat from the beach, and enjoy his time at the ocean.

I went into the water and got wiped out twice: The waves were big and strong, though we've seen far rougher. You just had to go out a little way to find yourself in a pool of moving water. Jim went in to and swam across between the lifeguards' flags twice. We shrugged when Charlie said 'towel'; Jim slapped Charlie a five and, from where he stood by one of the orange flags, made it clear to Charlie that he could go right straight into the water there and swim swim swim.

And Charlie went back in and showed us, and everyone, how it's done. 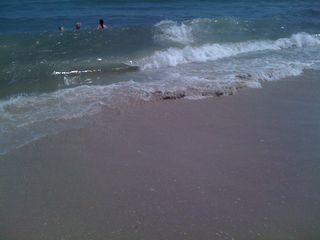 Swimming face first into the bottom of a wave.

Standing with his back to the waves so they crashed over him and picked him up, so he was basically flying in the crest of the wave.

Diving right in under the crest of an oncoming wave and swimming under and through. 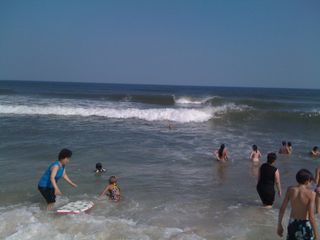 It was late afternoon, with people beginning to pack up their umbrellas, when Charlie came out, still grinning.

I had gone back into swim once more myself, without wiping out.

Charlie sets a good example about how, with steady doses of perseverance, you can fly. 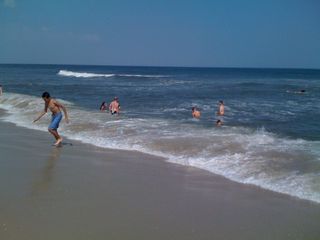 I've heard other parents of children like Charlie talk about how their child must be encouraged to make an effort -- to push a button on a tape recorder or to turn a door knob. Clara Claiborne Park wrote about her daughter Jessica making a wonderful attempt at coloring with crayons but after it was noticed and praised Jessica wouldn't (or couldn't) press down hard enough with the crayon to make a legible mark.
Park noted that as a baby, her daughter preferred to sit and do nothing or to crawl around a spot of sunlight on the floor rather than engage with other people.
What do you suppose is behind the seeming lack of desire of autistic people to take action on other than one's own terms?

@Jill - I've wondered about that myself about my own daughter, who often exhibits those traits - and asked myself whether Donna Williams' concept of "exposure anxiety" might not be part of the equation... are you familiar with it? Kristina, of course I'd be very interested in your thoughts on that as well -- kudos to you all for hanging in there...

By whatever name (exposure anxiety) you call it, I think Kristina makes the point well (and has before) the benefit of not responding to Charlie's request/demands immediately if, as parents, she and Jim are wanting him to go in another direction. Charlie's mental processes are now more complex than simple stimulus-repsonse. He needs more time to process between communications. Just my immediate thoughts...

For my boy, it seems that once he figures out (on his own, of course - can't show him a blessed thing) exactly *what* the task is, he can do it with ease and accuracy. Then we have the issue of his trying to apply the steps of the just-learned task to whatever the next task on the list is. A large tendency to overgeneralize (for sure) combined with a large dose of genetic stubbornness makes for interesting teaching around here. But, once he's got it, he keeps it! But, he'll only demonstrate if he wants to, or if Skittles are present... He is definitely my child - will work for food!