I wrote this post on Care2.com about 20 year-old Bryan Nevins who died last Saturday after being left in a locked minivan by two caretakers at the Langhorne, PA, residential center where he had lived since he was 14 years old. Bryan and three other Woods Services residents had gone to Sesame Place, an amusement park in Pennsylvania. (We've been there with Charlie once.) Last Saturday was sweltering here on the East Coast. A coroner said that temperatures in the minivan, with windows shut and doors locked, would have reached 125 to 130 degrees Fahrenheit in an hour. Bryan, who was non-verbal, was found lying down in the backseat.

Yesterday, disability advocates protested at the Woods Service building: How could those two caretakers not have realized that Nevins was still in the minivan?

I've had Brian and his family on my mind since I read about him Wednesday morning. Threaded through my thoughts was the question: If Charlie were in a similar situation, would he try to get out? Would he rap on the windows, try to break a window? Call out or otherwise raise a ruckus? Or would he remain buckled in his seat as he knows he is supposed to do in the car, assuming that someone would come to get him?

My first thought was that Charlie would try to get out.

Then I realized, terribly, that I'm not so sure.

Charlie is often ready and wanting to go out before Jim and I are, and will (after asking) go to sit in the white car in our driveway. He routinely shuts his door. Because there have been times when various items have been defenestrated by Charlie (while the car is on the road), and when Charlie has attempted to open the door of a non-stationary vehicle, we still have the child safety locks on for both back seat doors. But what keeps Charlie safe while the car is in motion could also, it occurs to me, prevent him from getting out of the car to safety, when the car is parked and locked. Charlie has figured out that, if he's in the backseat, and no one is in the front seat, and the car is off, he can climb into the front seat and get out via either of the two front doors.

But really, I don't know what Charlie would do should he ever (and we're not going to let that happen---and I'm sure Brian Nevins' parents said the same) find himself in the terrible situation of being locked in a car and no one around. Charlie can talk and he does ask for help in certain situations (if he's not sure how to open a container of food). But he doesn't usually raise his voice loud enough so that he could be heard in a different room, and he only sporadically goes to look for us if he needs help and we're not nearby.

From all this, I'm reminded for the gazillionth time, we never can be too careful when it comes to taking care of Charlie and certainly when it comes to who are Charlie's caretakers. I actually can tell when Charlie is asking for help to open a jar if he's in the kitchen and I am, say, upstairs putting away laundry, based on the thumps of his feet and what doors (cabinets, refrigerator) are being opened and closed. But I can tell this because I've spent so many years learning to listen for Charlie, learning his particular ways of communicating. Jim and I have spent one moment after the other checking to make sure of Charlie's whereabouts: Since he was born back on the 15th of May in 1997, I've never not known where he is.

We'll keep working on teaching Charlie to learn to ask for help; to go to find someone to ask, if he's alone. These are the sort of skills that are especially challenging to transfer to real-world situations. Charlie can know what to do to get himself out of trouble in one situation, but not in another.

It's another reason he favors familiarity, and that we seek to help him deal with new situations and, too, with small twists in his routine. 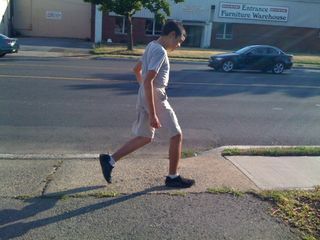 One routine that Charlie has gotten into is after-school snacks then a bike ride. Thursday evening Jim was to visit a friend's American Studies graduate course to speak, and asked Charlie if they could ride bikes soon as they came home. Charlie assented: As Jim said to me later, right now riding bikes is Charlie's main thing.

After they came back, Charlie and I zipped Jim over to the train station. We spent the next few hours engaging in said snacks, taking a long walk, and using the computer. With more than an hour remaining before Jim would return, Charlie asked to go. I set the timer and he stood for over a half-hour in our living room, looking at the changing numbers. After that, Charlie insisted on the car and I did a little hemming and hawing. We drove to the train, Jim texted me that he would meet us at the local carnival (where Charlie was wanting to go) and thereto I drove. We saw Jim just after we had parked the white car. Charlie was a little more anxious but, after getting in his customary three rides, was ready to go home and listen to some music and go up to bed with a smile.

He most certainly had not wanted to wait for those rides but he did.

And, I had actually had set the timer for an hour, but Charlie was fiddling with it and set it off somewhat earlier---a hopeful sign, perhaps, that he'll take the measures he needs to?

Maybe. In the meantime, we're certainly trying to do all that we can, to take the best care possible of our boy. It's not easy: It's something we embrace every day, and with all of our hearts.

That's a horrible story. Imagine that poor young man trustingly waiting for someone to take him out of the van and all the while he was literally being cooked to death.
I was surprised by your statement that you have known Charlie's whereabouts every minute since he has been born. I'm sure you thought you knew, but really, when we put our children in the hands of caretakers, teachers and babysitters we trust them to be where they say they will. You were fortunate that nobody ever took Charlie away without your knowledge while he was at school. Granted, chances of that happening are slim but you never know.
My eldest son was about three and staying with the owner of a nursery school after school hours when my husband and I were neophyte lawyers, working (it seemed to us) virtually around the clock. Our younger son was an infant who was cared for at home by a nanny. One weekend morning we were all together, running errands at a local strip mall when our older son pointed to a liquor store near where we were parked and said, "Miss D. goes in there."
Naturally we were surprised. How did he know? Did he go with Miss D in her van when he was supposed to be at school or at her house? Apparently, his babysitter took our son and her own child with her while she ran errands, said errands including a stop at the liquor store that had a bar inside. The two little boys were instructed to wait in the van and not to let anyone in.
How often this happened and how long they waited I have no idea. The babysitter said it happened once while she "ran in" for a bottle of wine "to serve with dinner" but on checking with the liquor store (you don't lie to a lawyer and an angry parent) my hubby discovered it was pretty much a daily routine and she was in there drinking for about 45 minutes every time before driving (!!) home.
Fortunately, nothing bad happened but it could have. Our son was too young to shout for help or pound on the window to attract the attention of a passerby. If the babysitter didn't return the boys would have frozen (this was in the winter).
So yes, I get it and I'm furious that the school allowed the young man to die.
I'd be interested to hear how you and Jim teach Charlie to seek help in case of an emergency. The mind boggles. What if you and he are home alone and you have an accident that renders you unconscious. Could Charlie phone 911?

These are issues I know I struggle with in constantly revising and developing my social skills curriculum. We spend most of our student's lives teaching them to be quiet and compliant. Teaching them how to recognize when they need to stand up for themselves, make a big deal, and say, essentially, "This is not okay." is very difficult, and also contrary to most of the rest of what we teach. There are no easy answers.

@Jill,
Perhaps I am too trustworthy but every school that Charlie has been at has made it clear, only WE can pick him up, unless we otherwise give instructions. (My parents have been the only people who have picked him up from school, besides Jim and me, and we send in photos in advance, etc..) We may not always know WHAT goes on in a classroom, but we do know WHERE Charlie is, keeping in mind that we are not, of course, omniscient. I think we have come as close as might be possible to knowing his whereabouts since Day 1.

Knowing that Charlie is not able to tell us what goes on has meant that we have taken a lot of precautions. Except for schoolbuses, Charlie has pretty much only been driven anywhere by us and my parents.

@Life Skills Teacher,
Yes---I'm starting to realize that compliance can be over-taught, perhaps. I have a feeling that Charlie may think that he's not supposed to 'rock the boat' and that he might well (as Jill wrote) simply wait in full trust that someone would come to get him.

No easy answers on these topics.

Heartbreaking story. It's still very unbelievable to me that he was just forgotten- at the very least, there are some institutional problems there if their procedures don't involve any kind of check-in with other staff on a return to the home.

It makes me nauseous just to think of it- I'm very glad that Dylan's in a good home with an excellent safety record, but it never takes away the worry.