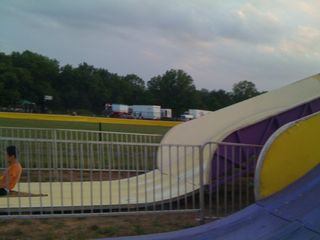 It has become a summer of carnivals and rides for us, it seems. Rather indulgent, perhaps, but Jim and I rather feel that we're making up for lost time, for the years when we didn't go to any of the many local fairs that seem to crop up in parking lots and grassy fields all across New Jersey in the summer. Charlie did not ask to go and even when he did, we shied away. Getting spun up or around with calliope music playing and kids screaming delightedly make for sensory overload whatever your sensory processing diagnosis, or lack thereof. We suspected that Charlie, aware of how rides got (quite literally) to his own head, preferred to stear clear.

Jim having read that there'd be a fair in a central Jersey town we used to live in this week, we decided to go down that way and take a look-see. Charlie has been pointing us to go 'that way' from time to time and talking about the (very wonderful) teacher he had in preschool there. So after 'the usual' bike ride + walk combo, into the white car we did go.

The carnival was located in a huge lot adjoining a bunch of big box stores that had been built after we'd moved out of the town. As Jim bought tickets and Charlie started hunting for the ferris wheel and fries, I could feel the nostalgia rising in me. This sprawling town was where we'd first lived when we moved back to New Jersey from St. Louis in June of 2001. Jim taught first in Jersey City (at the college where I now teach) and then at Fordham University, all the way in the Bronx (the 'Rose Hill' campus). He had something like a 2 1/2 hour (minimum) commute (involving driving, a very long train ride to Newark, another train ride to New York Penn Station, a subway ride on the D or A train, and a walk to the campus), and he had to go almost every day.

Consequently, Charlie and I spent a fair amount of time in our condo (which had quite thin walls so we could smell the smoke from our neighbors), in the condo parking lot, in the condo playground, and (when it was summer) at the condo pool. He was 4 years old when we moved there and I still did a lot of ABA teaching with him: Those were years of many hours with just Charlie and me, once he came home from the public school program that was the reason we'd moved there in the first place. As we walked amid teenagers scoping each other out (and trying not to look like they were), it occurred to me that these kids had gone to school with Charlie, albeit in other classrooms, and here we all were again.

Charlie and Jim waited in the line and then rode the ferris wheel while I got sodas and fries. At the giant slide, Charlie was about 2 feet taller than a lot of the kids whom he walked up the stairs with. He waited his turn at the top before sliding down. He wanted the merry-go-round and over to it we went.

When Charlie got to the front of the line, the man taking the tickets turned around and asked if I was Charlie's mother and said that he needed to speak to me. He took tickets from a few more kids and then turned to me and said that because of Charlie and his 'condition' he could only sit down on one of the painted benches and that I had to to accompany him 'because'; he pointed to a sign saying that said only those 46 inches and under could ride the horses.

Amid the noise and crowds at the carnival, all that came out a lot less clearer---that is, it wasn't at first clear that the man was making two points: 1) Charlie was too tall to ride a merry-go-round horse and 2) Charlie being disabled, he was to be accompanied by a parent or other adult. Without missng a beat, Jim and I had launched into advocacy mode, noting that Charlie had been able to ride merry-go-rounds at pretty much every other carnival across New Jersey, could we speak to the manager, etc. etc..

Charlie handed over his ticket and sat down where he was directed. It was several more minutes before the merry-go-round started up and he and I found ourselves crowded together on a tiny bench (the seat behind us held only a woman and her baby) while the ride rotated s-l-o-w-l-y. (Without any calliope music!)

I had been worried that Charlie would flat-out refuse to do anything but ride a horse. Clearly, he was able to handle sitting on the bench rather than the merry-go-round horse and we followed his lead and were flexible; realized it wasn't a federal case or anything here. And, Jim and I were reminded that the lease on Charlie doing some carnival rides---like the giant slide---is not indefinite, as he gets older and bigger.

Perhaps we've been overdoing the rides of late in unconscious recognition of our growing up boy.

Charlie was ready to go to the white car after the merry-go-round. Once buckled in, he asked for a hambrgerand grinned as we went through the drive-thru line of what was once our 'home McDonalds,' back in the days when preschool Charlie was on the gluten-free and casein-free diet and Jim and I had to go to ridiculous lengths to get him a bunless hamburger.

I think it well, how we have all been changing with the times.

Letting go and letting be: These are a kind of advocacy, too.

Lovely post. It's good to look back and see that not only do our children change, we do, as well, and the way we handle the challenges we face changes, too.

Today is my day to look back. 11 years ago Bobby had a stroke and our world changed, adding that experience and the changes it made to his already existing autism. He's grown so, changed so, and even though there is still heartache in remembering that day 11 years ago, there is, when properly focused on the present, such joy that he's happy and healthy (and able to get McDonalds in all its glory after we let our 4 year gfcf diet end last year!).

Thinking of Bobby and you and your family, Kim.

Funny thing about Charlie and being able to get 'McDonalds in all its glory' (love that line) ---- Charlie sometimes doesn't want the buns. Not that I want to order him 'meat in a box' as in the old gf/cf days, but I rather wonder what he'd think!

Hah; even when my three don't want all the bun, I know they'd look at me like I'd lost it if I handed them a sandwich with lettuce as the bread (which is what we did for several of those years--we even tried corn tortillas as the bread).

Outgrowing rides has been a difficult concept for my son - Dutch Wonderland is his favorite place in the world and as we go there just once a year he yearns for it to remain always the same. The silo slide was his favorite and we had some drama there when he was too big. But even though it broke my heart, you do at some point get to be too big and the measurement requirements at the gate make it clear. After 3 years it's still a topic of conversation, but it's accepted.

*sigh* not sure at all how to explain about 'getting too big' to Charlie regarding rides, though I think he will understand, albeit gradually.

We've tried going to bigger amusement parks but those have seemed overwhelming. Not sure about putting Charlie on one of those big roller coasters: What if he decides mid-ride that he wants to get off?

I'm always terrified when my kids go on big rides...I'm scared of them myself, so they usually have a different adult with them while I pace and hide my eyes :-) I've always worried about someone deciding half-way through that they're done, but we've been lucky so far.

Personally, I'm not up for big amusement parks - too many rides I won't do. Dutch Wonderland seems about perfect. A very small and a medium small rollercoater, a flume and a slide with burlap bags seems about right for all of us. Oh, and a water slide fountain park to cool off if it's miserable. Most of the kids are under ten, but it's very welcoming to special needs.

Deciding to get off the roller coaster isn't an issue - it's a short ride and the lap bars lock. The hanging ski lift style cross park ride makes me worry, but he's never once squirmed or budged. I expect his self preservation instinct is stronger than my imagination makes it out to be.

@Jen,
That is _exactly_ why I don't know about Charlie on a big ride! I keep thinking what if he tries to get up as a roller coaster going upside down.....

@a parent,
I suspect you're right about that 'self-preservation' instinct. I have kind of wondered what Charlie would think about the ski lift style ride. Jim and i aren't inclined to ride any such rides so that probably lowers the likelihood of Charlie trying them soon (I am a complete coward about rides; can't even get on a ferris wheel).