17 miles, that is, on the bike trail in Jersey horse country yesterday morning for Jim and Charlie.

I don't have a photo because I wasn't there, as I had gone into work for meetings and other getting the semester started sorts of business.

Jim told me he and Charlie ended up extending their ride after someone sighted an unleashed dog some ways down the road. They turned their tires and went off in the other direction, and, accordingly, did a couple more miles than planned.

I expected Jim to text me that, once home, Charlie had gone to take a little shut-eye in his room.

But they went to the barber with the result that, even when it's hot again, Charlie should not end up with helmet hair.

And then, another bike ride.

I got home while Jim and Charlie were still out. Often when he gets back from a ride, Charlie is keen to go right out again in the white car. But yesterday his main interest on being home was having a multi-course dinner at 5pm consisting of many contents from our refrigerator (which has been easier to keep stocked with things Charlie likes as he has not been devouring everything he sees at once, but only taking as much as he's actually hungry for). He and I did go out in the car afterwards but Charlie was quite content to 'stay local.'

Charlie was glad for some computer time (which became a bit frustrating as our internet connection kept going in and out; he handled my requests to 'restart' the computer very patiently). He went up to bed just after 7.30pm and was suddenly a bit indisposed and then felt better (and I found myself doing quite a bit more scrubbing, rinsing and laundry-ing than I was planning to do at 9.30pm but, hey, always nice to have a cleaner house). As Charlie settled down to sleep, the wind was making the blinds rattle and sending a cool, but not cold, breeze through the open windows.

With the grey but still bright sky and a few yellowish leaves blowing across the back lawn, I was reminded strongly of St. Paul. We lived there from June of 1998 to May of 2000, in a second floor duplex built in about the same era as our house, with dark wood and a screened-in porch in the back which we mostly used to store things. Looking back, I should have sat more in that porch (Jim would sometimes take a book back there, until it got too cold), but most of our time in St. Paul was hectic and anxiety-ridden: Jim was commuting back and forth every weekend to St. Louis, where he was a tenured full professor with an endowed chair (in the second year we were in St. Paul, Jim had a sabbatical, very very fortunately). I was starting my first tenure-track job as an assistant professor.

When we moved into the duplex, he wasn't walking and he had yet to be diagnosed as autistic.  Here he is---it's the #2 Barney photo he found and that I photographed---in the dining room of our duplex. 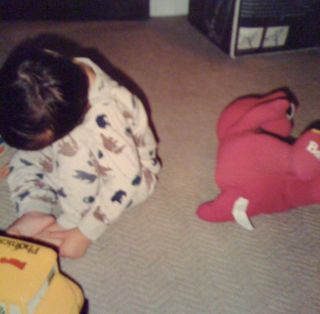 I think Charlie is turning his body and head to the side to look at something. When he was younger, he often tried to look at things with his head held horizontally.

And do my eyes deceive or does Charlie look to be just a bit bigger than Barney-who-says-100-things in the photo?

I did spirit away quite a few photos in my bag Tuesday morning. They're now in a desk drawer in my office. Actually, I rather prefer having them there, as now I can sneak a look at them while on my own. I hadn't seen most of the photos in years and years until Charlie brought up the bag a few nights ago. Being able to go through them now, in a quick moment between seeing students or writing work emails or grading Latin quizzes or what have you, in my now-office (located in an old brick apartment building with my window looking out straight on a freshman dorm, and furnished with a hodgepodge of shelves, a sofa, and chairs that my secretary and I were able to lay claim to after many were left as 'trash' in the hallway)---being able to see little Charlie and think of what he was like and, yes, how far he's come and how far Jim and I have come in walking, and now riding, with him---it's a good place to be in this Autismland journey that has taken us so many, many miles out on the road.

Clearly he does not have helmet hair in that photo - looks shiny and enticing for a tussle with one's hands.

Spiriting away a few old photos to your desk drawer - made me think of the many items Charlie keeps in the white car....

I did a post long ago about looking for new meaning (analyzing) in old photos. - Like you did in mentioning his head posture.

You have all come far indeed.

Here's a suggestion for next year:
he Tour de Somerville, http://www.tourofsomerville.org/. It's a 70 year old event, a four-day cycling competition for amateurs and pros. It might be fun for Charlie to ride long distances with other people.

There's also the chance of starting a bike-riding club at the BAC. Perhaps there are other local families that ride bikes together - you could meet in parks in the region.

Just a thought! It seems like Charlie's day (and Jim's, too) is practically one long bike ride from waking up to lying down. He could certainly do a marathon at this point!

There's also a short (10 mile, I think) bike ride in Jamesburg, Middlesex County, around Halloween. The Somerville ride is great but there are many, many riders and large crowds come to watch them whiz by at breakneck speed. The Jamesburg thing would be more mellow for Charlie's first organized ride.
Also, my MIL is a retired college prof. I understand how difficult it must have been for Jim to give up a full professorship with an endowed chair. You, too, of course, with your first tenure track job.

Thanks, we will keep that in mind!

I could be wrong, but I suspect most of the other kids at Charlie's school don't ride bikes quite as far as he does, or at least yet. Riding in streets with traffic is a real concern for so many people (understandably).

@Jill,
Also will keep that ride in mind---we are looking forward to biking as long as the weather allows.

I still remember writing the letter saying that I was resigning from my job.

We really are glad that we ended up back here on the East Coast and in New Jersey in particular. But at the time (when we were still in the Midwest), jobs were a big question mark for both of us.