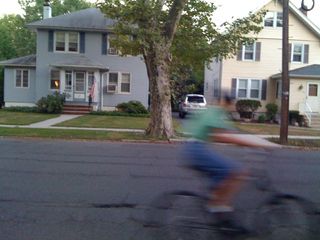 Jim and Charlie went for a 23-mile bike ride today in New Jersey horse country (they even had to stop for some horses).

No photo as I was at work teaching my 4-in-a-row.

Actually, they could have done 24 miles---it was just one more mile to the end of the trail---but, as Jim noted, Charlie seemed to be getting nervous as the ride went on and on.

Too, the very greatness of the achievement (I'm just going to call it that) seemed to make Charlie apprehensive. He's not in any way competitive, not trying to beat anybody in anything. If Charlie rides his bike long distances, it's because he likes to, not with an eye towards competing in road races or being the best. Charlie rides for the sake, the joy, of riding.

But whether or not another 10-miler was called for after he woke up from the nap?

Well, certainly yes, the way this summer and Charlie's liking, or need, or zest for, riding his bike and being out in the open and active have been shaping up.

For the first time in our travels with Charlie he is self-motoring at unprecedented levels and really going the distance. I'm honestly not sure how far he's going to go. Those 33 miles today didn't exactly seem possible even a few months ago---when I renamed this blog We Go With Him, I wasn't thinking about anything like this summer on the road!

On a bit of different note, something I would not have wanted to have thought would occur at Care2.com: The San Francisco parents of an autistic child have been charged with misappropriating $400,000 meant for autism services from their school district and insurance companies. What were they thinking or, perhaps it'd be better to say, not thinking?

That could be the length/distance of a whole city.

(Oh yes. He took 23 miles in the morning and another 10 miles on another route).

Wow 33 miles! Go Charlie! There is something very inspiring about the fact that he rides 33 miles just for the pure joy of riding - no competition, no need for accomplishment, no fitness or weight loss goal, just for the fun of it. I need to learn from Charlie.

Charlie's pretty impressive (to say the least), but wow- I am VERY impressed with Jim for being able to keep up! I get tired just chasing the kids around the house.

As for the parents in San Francisco- I'm not too surprised. There will always be parents who abuse their children, the system, and anything that they can get their hands on. With so many cases of abuse of children with autism, up to and including murder by parents, financial shenanigans don't surprise me at all. We like to think that all parents of autistic children are only working for their children's benefits, and it's a shame when we're shown that it's a false assumption (assuming that the charges are true). Unfortunately it not only makes life more difficult for their own child, and the other children who could have used that money, but for other parents in the future who are trying to work within the system.

Amazing! Charlie's philosophy is one we should all follow: do what you love for the pure joy. I've missed out on a lot of fabulous posts here and trying to catch up. All in one day. Looks like Charlie is having fun!

It's been a good summer, kind of can't believe it! Summer does always feel me with trepidation.

@Jen,
I guess I wasn't, on the one hand, so surprised to hear about that SF couple 'bilking' the funds and it sounds (from what I've read) that the school district wasn't keeping the best track of where their funds were going. I would think they'll be even harder on families who are seeking reimbursement for getting services for their children now---so this particular case may have some very sad fallout.