The ocean was just as Charlie loves it yesterday: Active.

The waves were rough with lots of foam, and big and trough-y, so you could see the water pulling up into a peak and then crashing down, but the crash came slowly and full of froth. Not the sort of water for babes-in-arms and excited toddlers (as has often been the case in the past few weeks). If you couldn't swim, you shouldn't have been in that ocean Saturday.

The current was strong and pulling south. I was directing Charlie to go start swimming at the more southern of the lifeguard's flags when a woman came over and told me the current was going in the opposite direction. I recognized her: A couple years ago her son, who must be about Charlie's age, kept trying to get his attention while they were both swimming. Jim and I explained why Charlie didn't respond as most children might and then spoke to the boy's mother, and she was very friendly. They live near the beach and, indeed, we've seen them almost every time we've come down this summer.

Jim and Charlie and I all ended up jumping waves---Charlie going under quite a few, one time on his back, headfirst---so I took a record few photos, seven in total. Charlie was very amenable about us redirecting him (Jim with a couple of words, me with some very elaborate pointing northwards) to stay within the flags. Most people weren't as aware as we were about the current so there was a cluster of swimmers nearer the southernmost of the orange flags. After Charlie, two girls on their boogie boards and a few other people (Jim included) got somewhat whomped under a bigger than anticipated wave, Charlie went out of his way to stay where there were fewer people.

It was a good workout and we all got the feel of the ocean into us. We got sandwiches and sushi and then we unloaded the bikes we'd put onto our trusty bike rack and off went Jim and Charlie. The wind was not quite at their backs and there were more a few other cyclists; Charlie, as Jim reported, did a nice job passing and maneuvering around them.

Our ride home up the Garden State Parkway was fast. Once back in our house, Charlie went to the room that used to be his bedroom and opened the closet. The night before, he had carefully positioned two king-size fleece blankets, one yellow and one pale blue, in there, and gone to bed without them. Saturday night, he took the yellow blanket, brought it downstairs, and said:

The blanket was therein placed, Charlie pulled the drawstring of the white trash bag tightly, put on his socks and shoes, and dumped the bag in the garbage can outside. He then consumed quantities of food commensurate with what might be expected in a growing teenager who's spent the better part of a nice summer day doing a lot of aerobic exercise (Charlie and Jim had also done an early morning bike ride prior to our trip to the beach). He had some quiet time on the computer and went to sleep, minus one blanket.

I have been wondering how Charlie would deal with our not staying at the beach for two weeks this year. We have done so for almost every one of his thirteen years. Too, we have stayed at the same rented beach house for the past five years and walk by it frequently (yesterday included), as we have still been swimming at the beach near it, Charlie being so familiar with it (and we finding it quite nice to know some of the beach's other visitors, from the mother I spoke to about the current to some of the lifeguards). Charlie's love of the beach is elemental and Jim and I hope he'll always find it a place where he feels so at home, where he feels so joyful, complete, and happy.

His devastation on leaving the beach used to make our visits so painful that we used to rarely visit the beach near the various beach houses we have rented. A now older Charlie has been able to handle being at his beloved beach, and leaving it, with much more peaceful easy-ness. His attempt to make sure we wouldn't leave when he was six or seven has become the stuff of legend around here.

We had been staying at a beach house that was (luxuriantly) right on the ocean. Charlie's two favorite toys were Alphabert (a toy computer) and Barney (a stuffed one that was supposed to say 100 different things, but they all sounded the same to me at that point---my parents had given Charlie Barney for his 1st birthday). On the last day, we had packed up our old green Subaru stationwagon and realized that Barney and Alphabert were not in the backseat with Charlie. When we asked him where they were, Charlie said:

Jim ran back upstairs through the beach house and finally found Barney and Alphabert in the closet of Charlie's room there. In tears, Charlie accepted having them beside him in the backseat and that was the beginning of a really broken-hearted ride home.

We don't have Barney and Alphabert anymore. After we traced nearly all of Charlie's (increasingly more terrible) episodes of head-banging to something involving Barney, Alphabert, and videos of Barney and the Teletubbies, all those things went into the garbage, and I can assure you that Charlie was not very happy that day, or for some days. I've sighed a lot about the decision simply to dump those things, not knowing that Charlie, as he entered adolescence, would again have a terrible time with self-injurious behaviors.

On the other hand, it's as well that there's no purple stuffed dinosaur sitting in the white car now. Charlie occasionally asks to see Barney videos on YouTube and is done with them after a clip or two. He often mentioned 'Barney' and likes it when I name the other members of the 'Backyard Gang.' He doesn't like to hear Alphabert mentioned. And we now have a better understanding of how what Charlie likes (especially when it's something mechanical) can become an obsession, and how that obsession can lead to difficult things.

Clearly there is some magic about putting things into the closet.

I just hope that Charlie knows that he doesn't have to worry that this house, our house, is the one he can come back to; the one that is his.

And that he doesn't have to say good-bye to any of his favorite things anymore. 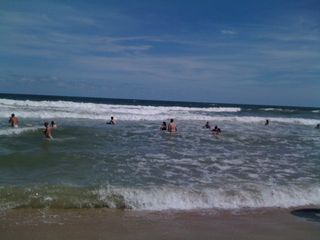 Ah, yes, Barney. Obviously your kid is growing up, though slowly. (Auties, like soldiers and fighter pilots, are famously slow to grow up.)

Here is what I posted as a comment at The New Republic, verbatim as I wrote it there, I think:

"Well, the Barney critter is offensive to anyone with any nous, or common sense, or intellect, or taste, or intuition, or feelings. In my country, where we're still allowed to have pistols, a favorite pistol target is a silhouette of the Barney critter, with more or less lethal hit zones marked, just like the human-silhouette target, except with facial details.

Lots of folks seem to want to shoot Barney in the face."

Ma'am, that picture of yourself is very disconcerting to me.

I think of you as a very senior learned person with several degrees in difficult disciplines, authorized to teach, and dispense wisdom and good advice, and then you post a pic of yourself looking like a cute little Han girl!

Don't you have a later-taken picture of yourself, looking all mean and grumpy and dangerous to bad students?

Me grumpy? I almost never get mad in my classroom. Or at least I try not to!

I could do without Barney, believe you me. One thing I would say to parents with young children on the spectrum: Be careful what you introduce your child to, as you may well live with it (TV shows in particular) for a very long time.

Like Charlie and Jim, my kid loves to go bike riding before hitting the beach. Fortunately, resorts in Panama City Beach, FL are friendly enough to accommodate biking enthusiasts like my son. And about that Barney "fixation", I think I can relate to that. My son loves SpongeBob so much that it's a necessity for me to take his stuffed toys in our vacation rentals in Panama City Beach, FL. It's also hard to take his toys off of his hands when we're on the beach.

That's great there is a place you can take your kid and that he loves bike riding! Charlie has never been interested in SpongeBob---still sticks to Barney (though he rarely watches the show these days). And great about bike riding, maybe not so much about sand on the stuffed animals.