Biking in the Old Neighborhood 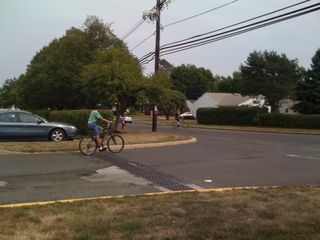 Charlie, and we, slept in Saturday morning. Jim and I were glad about this---Charlie has been maintaining what is pretty much his usual school wake-up time of 6.30-7.30am---but Charlie was unsettled. It was 'no' to a walk and 'no' to a bike ride and then Charlie saying 'I want diner' and 'I want [name of small local grocery store where the incident of the red brownie box occured'] over and over. And over.

I had made coffee and plunked myself down with a cup in a chair across the room from Charlie. He was sitting on the edge of the big (super big), vinyl-y, stiff IKEA couch: He's rarely sat on it, prefering an older, cushier blue couch, which has well-worn cushions and which is, frankly, rather hard to pull yourself out of once you're in it. We had actually bought the big IKEA (the blue couch is from there, too) with Charlie in mind. A couple of years ago we were rudely awakened to the fact that beneath a puffy couch arm or back is a hard wood frame, after Charlie banged his head on it. I first spotted the big black IKEA at the house of a friend whose son is on the autism spectrum and knew that with its size, toughness, and wide well-padded sides, this was the couch for us.

So of course Charlie rarely uses it. Until yesterday morning. He sat bent over with his arms folded across his chest, on the edge of the couch. 'I want diner.' 'I want diner.' Etc..

I noted that the diner, and the local grocery store, were places (along with a few others) that we didn't go to anymore, and that that was all right, and he was doing really good now. That we don't do things we used to do, and things are ok.

Charlie got up and stood looking nervous, elbows pointing out. From upstairs, Jim said something about how he and Charlie were going to ride bikes. 'No bike ride,' said Charlie. Jim said he was getting up and they'd ride bikes.

Up the stairs went Charlie, to return with his big blue fleece blanket. He went into the kitchen and got a plastic trash bag and, looking at me, said 'give, Mom.' 'Give' being a word that Charlie uses in a variety of contexts to mean something like 'take this from me and do something with it,' with there usually being some fairly obvious contextual clues (blanket and trash bag) to indicate what Charlie has in mind. I said 'I should put the blanket in the trash bag?' after which Charlie said 'yes.' After which I having done, Charlie pulled the bag shut and brought it out to the garbage.

Jim was up and ready and I got out the bikes from the shed and off they went. Slowly (Jim reported) at first, and then, after the half-way point, Charlie was pedaling steadily. I had time to go running, get dressed, hurry to that small local grocery store, and email a student before they came back.

The bikes were left in the driveway as Jim had A Plan. After lunch, we loaded the bikes on the bike rack and drove down to central Jersey, near to a town where we used to live.

Actually we stopped in a town that is ten or twelve miles away from that town-where-once-we-lived, when Charlie was 4-6 years old and we'd just left St. Louis (and two jobs), so Charlie could attend the autism program in said town's school district. Said town had no train and Jim had to drive the ten or twelve miles to this other town (at 4.30am, some days, to be in the Bronx for an 8am class).

The back roads by farms and a branch of the Raritan River and some Victorianesque houses have some gently rolling hills and made for prime bike-riding territory. At first hesitant to get out of the car, Charlie requested his helmet as Jim and I were unloading the bikes. Then he and Jim were off and it was a fabulous ride. There was more traffic than Jim had thought there'd be on the narrow windy roads, and Charlie handled the cars very well. And the end of the ride brought them onto the very sidewalks where (gulp) Charlie first rode a two-wheeler with training wheels.

I drove from one town down to the other and parked the white car right outside the condo where we used to live from 2001-2003. Everything looked smaller than in my memory, from the distance to the mailbox to the proportions of the streets. Our old neighbor still lived there, I noted, on seeing their teal Toyota. There was an American flag waving in front of our old condo. I went past the mailbox and down over a little footbridge (there's a creek down there, the water covered with a thick moss layer; I instantly got a mosquito bite) saw that sidewalk. 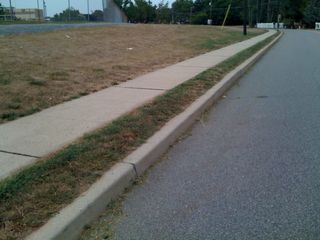 Then I saw my boys, only now they're almost the same height and on black bikes interchangeable in size. 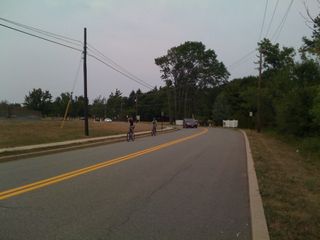 Once upon time, here they were in the selfsame spot. 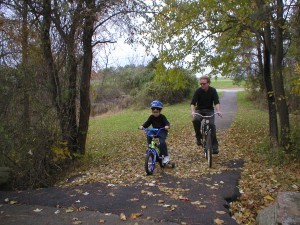 I meant to get a similar front-ways photo but I was so excited to be just where Charlie had started to learn to ride a two-wheeler that I didn't have time to run down by the creek to take a photo. 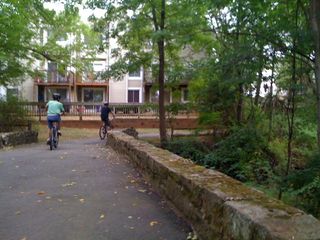 Charlie was eager to get back in the car. I don't think he was feeling too sentimental about checking out our old condo. He was bright-eyed and amenable to 'whatever' for the rest of the day (a burrito, one more bike ride on his home course in our now-neighborhood).

Talk about a triumphant return.