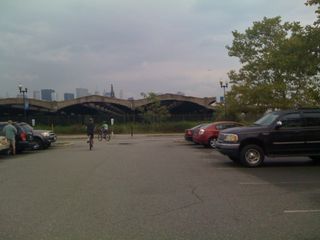 Day 1 of Camp Charlie (2010 version) got underway with Charlie in the white car at precisely 8.19am, which is precisely the time that Phil Schaap starts his Birdflight radio show. I set the timer for an hour so Jim and I could get ready ourselves ready and load up the bikes.

We had planned we'd go to Liberty State Park for a morning bike ride and that's exactly where we set off to. Charlie got very excited as we went east on the Interstate and even more so as we approached the curving on-ramp of the Pulaski Skyway: The Skyway affords an absolute fabulous view of the Passaic River and all the industrial-commercial activity connected with Newark Airport and the Port of New York and New Jersey. It's got  two lanes going in each direction with a modest concrete barrier inbetween and curves gradually up and down.Given that the average driving speed is 70 mph, and that there are on and off ramps between the two inclines or (in less elegant language) 'bumps' (as Jim and I refer to them), driving on the Skyway is a little more exciting than on your average highway.

Plus, if one is (as we were Thursday morning) driving east on the Skyway, the view is the Manhattan skyline. Indeed, when going down one off-ramp (the Broadway one), it seems as if one is going to drive straight into the Empire State Building.

Fueled by this rollercoaster-ish-kinda ride, Charlie was ready to get on his bike at the park. He and Jim rode past the huge train shed (which now seems mostly to serve as cover for some ever-taller weeds) and then Ellis Island and Lady Liberty.  And then---as that's not a long sort of ride---he and Jim went out on the city streets.

They ended up biking for about an hour after which we stopped for summer rolls at a Vietnamese place (appetizer) and then McDonald's (main course, right?). Going to the McDonald's resulted in us being on the side of Jersey City where there's a bridge with a drawbridge which goes up when too-tall ships need to pass under. We thought the drawbridge being up was why there was serious gridlock that we got caught right smack in the midst of, only later to discover that the reason was police activity (explaining why we saw all those police cars driving in the opposite direction).

Charlie was completely at ease through all the commotion, including several tanker trucks and semis driving thisclose past us and getting stuck in the middle of the intersection when they attempted to turn. And, too, while Jim and I had a fast little exchange about the latest new Journal of Neuroscience study about how to diagnose autism in infants using MRI brain scans (full text and discussion by Socrates at The New Republic): 'How old,' Jim quipped, 'six months in the womb'?----after which he quickly noted, and I assented, how all the efforts to detect and diagnose autism in younger and younger children come to seem of less and less import to us as Charlie gets older.

Yes, it was important that Charlie was diagnosed just as he was turning two years old, and that he had all kinds of Early Intervention as a result.  But the day seems a long way off when people (not those of you reading here, of course) get it that autism is lifelong. Sometimes I think that, while certainly emotional wrenching, the whole business of diagnosing and detecting autism was the easy part. There was a clear goal about what we were doing (trying to find out why Charlie didn't talk etc.) and clear instructions about what to do (having him evaluated by a bunch of doctors and therapists, getting services started). And Charlie could be swooped up in our arms (yes, in mine too, in those days) and it's nothing surprising when your two-year-old is doing two-year-old sort of things like wailing in public places (even if he did wail somewhat louder and longer). Everything else, especially adolescence and adulthood, has been like a journey on a road that only seems to come into being as we walk on it.

Perhaps a little bit less of a focus on detection and more on the long task of living?

At which moment in our musings, Jim realized that we needed to get into one of the two right lanes to get onto the bridge back over the Passaic River, meaning that we had to make our way into a solid line of cars. (No problem as Jim was driving.) Once home, Charlie listened to some music and then went up to his room and took a 2-hour nap. As he should: As we reminded him, he is on vacation.

Being Charlie, he wanted another bike ride as soon as he awoke. This was followed by a little Mom 'n' Charlie in the car (with Jazz Alternatives on the radio), the eating (devouring) of sushi and watermelon, a little attempt to have Charlie start practicing his handwriting again as he did back in the winter, and an evening walk which started with Jim saying,

'It's not even hot outside!'

Camp Charlie adventures will be ongoing till September 7th, the day after Labor Day here in the US, when Charlie returns to the Big Autism Center. We'll try not to have to make too many last-minute merges to get to where we're going, but sometimes you just have to make your way in, through, and onward. 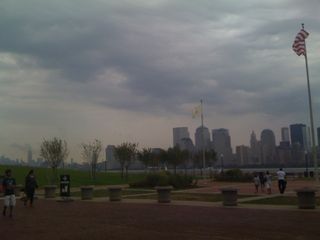 As always, enjoying your thoughts on life with Charlie.

And those teen boys don't "consume" or "devour" they sort of "inhale" food.

That was the word I was searching for!

Just got back from the grocery store.