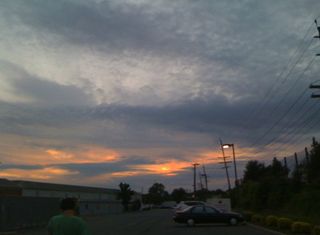 I'm speaking on a show called Family Caregivers Unite! on Voice America online radio on the 3rd of August 2010, at 10am EST (that is, today!, depending on what time zone you're in and when you're reading this). The show is hosted (very graciously and kindly) by Dr. Gordon Atherley. Estée Klar of The Autism Acceptance Project (TAAP) invited me to be a guest and I was very thrilled to be asked, and not only because of the great work that TAAP does. I first 'met' Estée some five years ago when she commented onmy blog and I started reading hers, The Joy of Autism, about her son Adam. Our boys are much older now (Adam is now 8 years old) and we've been through a lot of experiences. It was lovely to be able to hear Estée's voice and talk about life raising a child on the autism spectrum and acceptance.

It was good to be talking, albeit not face to face but over the phone. I don't talk a lot on the phone these days at home, when Charlie is around. Email and texting have made it possible to get a fair amount of phone-free communication done, and the sound of our voices talking to who knows whom has often been disconcerting for Charlie. Hence I try to speak on the phone (especially if it's a long conversation, and certainly if it's about Charlie, school, and so forth) when he's in school and (preferably) when I'm at work in my office.

And this very week, I'll be seeing a number of blogland friends, Estée and many others included, at the annual BlogHer conference. It's in New York this year and on Friday there's an autism panel on which Stimey and Sharon of the Autism Women's Network will be speaking, with Shannon moderating. I'm very grateful to the Internet and blogs for introducing and keeping me connected me to many a lovely friend and family. But again, nothing like meeting, and talking with, friends in person.

Also, my summer school class of local high school students is performing some scenes from Aeschylus' Oresteia (a trilogy of tragedies) and Aristophanes' Frogs on Wednesday morning. Everyone's been working really hard and we had a dress rehearsal on Monday. I'm to give introductions about the performance and the Greek plays (meaning, I'll have to struggle to keep it short), and get to recite some lines from the Chorus of Frogs (without costume). Watching my students and co-teacher Casey (he's an actor) has been enlightening, and I've learned (I hoped) a very few things about acting myself. It's been fascinating, and a lot of fun, to see the pieces of the performance take shape and think about how to bring the plays I've read for years to life; to make them real.

Too, living as we do with a boy of few words but much going on in his head, I've become quite attuned to how much is expressed through the body's movements and poses and actions. It's been interesting seeing how the students have been learning to use their bodies to convey their characters and how the words (sorry, Aeschylus and Aristophanes!) are just one part of a drama.

There was really not much drama of another sort on our homefront Monday. Charlie had some moments of distress---is anyone ever happy all day and at ease?---but mostly it was just a good day, in an ordinary kind of way, with its share of grey and sunshine. Indeed, one of Dr. Atherley's questions was one of the best I've been asked about autism and Charlie: 'What are the things that make the sun shine for you and your family? You can listen in to see what I said to Dr. Atherley and Estée. If you've been following Charlie's and our adventures for a bit, I suspect you already know the answer.

Nothing could be realer, let me tell you, than days with Charlie, days in which most of what happens is routine and basic. In which getting up and off to school 'without incident' is a Big Deal (a little less now, as Charlie has been very glad to get in the white car to go to school). In which a good day at school is 'incident report'-free, and a good day is one on which there is an incident report, but Charlie gets over it all quickly. In which there are bike rides and walks (2 with Jim and 1 with me, on Monday). In which we're able to note the telltale sounds (cries for 'Barney' and 'sushi') of Charlie in distress, to maintain a peaceful-easy enough composure, and stand back to let him go about his own business. In which we remark that Charlie says the sentence 'it is raining' with perfect clarity, no word omitted (even though it was mostly sunny Monday). In which we go to Quik Chek, Charlie searches the whole store for Quick Chek brand brownies only to discover that they are still out (we had checked the day before too), we leave 'without incident.'

Really, even just a few of the above make the sun shine for us.

But having all of them in one day is quite good, too.

If I calculate correctly, you are on the radio now. I hope they will post a podcast of the interview. Would love to hear your voice, too.

Meeting you and the other Moms I've met online at BlogHer would be lovely, but it is not to be.

I think you state an important comparison - stage acting and non-verbal communication. Perhaps we should both tease that apart a bit more for a whole post - ?

I am happy to read about so many things in your good day today.

I've been thinking about acting and non-verbal communication quite a bit, while watching our students prepare (and putting myself into the action a bit too). Yes, I think there will be a post---

Day's not over year here but so far it's been good too.