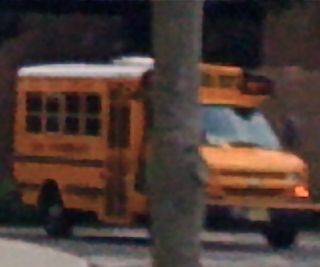 Charlie has been doing really well taking the bus home. Last week we hadn't been able to follow the bus home as we'd asked about at 'bus prep' meeting so yesterday I decided I would do it.

I had gone into my office in Jersey City for one last three-hour session with a student whom I've been teaching Elementary Ancient Greek too this summer. We had plotted out that we would, in a 6-week summer session, complete the equivalent of what I usually teach in one year, twenty-five chapters of the textbook. I've taught such intensive classes before but not yet at my college. I'm happy to report that, while my student has yet to take his exam (that will be Thursday), he did a very good job translating a passage of ancient Greek (an Aesop's fable involving the god Hermes) with an occasional 'leading hint' from me.

Plato awaits, but that will be in Spring Semester 2011, and checking out the route for Charlie's bus took necessary precedence. I left my student working on a (scheduled---I don't believe in pop quizzes) vocabulary quiz. I had left a window of time in anticipation of traffic and road work snafus (and drove into at least two of these, one on the Pulaski Skyway) and also because I didn't want Charlie to see the white car or me, lest he reach the highly logical conclusion, ride home in the white car today.

I made it to the Big Autism Center in plenty of time. It is so big that it has multiple parking lots, on different levels and these were filled with cars for the staff. So I was able to remain out of sight and to slip behind another bus which was behind Charlie's bus and to proceed onto the highway.

I then made some discoveries.

Charlie's bus bypasses all of the 'hotspots' that Jim and I have been worrying about completely. Charlie turns out to be the last child brought home on the bus. Inbetween, the bus (after a spell on the interstate highway) travels through some nice woodsy, hilly places and then very pleasant residential neighborhoods, and then down the hill to a state highway and thence to some other towns, ours included. It is a bit of a ride but in some streets that Charlie had never been to prior to riding the bus. Traffic congestion is inevitable in New Jersey but the bus seems to travel on roads where this is less likely to happen.

I was, in short, quite pleased. Many of the residential streets where other students got dropped off being very quiet, I was the only other moving vehicle besides the bus and so tried ducking into a sidestreet to avoid being seen by Charlie. I managed this well on some very hilly streets (I borrowed someone's elaborate curved driveway to turn around in) but, after pulling into another side street to escape detection, I lost sight of the bus. Lest you were thinking that I could start adding 'private investigator' to my list of skills, you will indeed be pleased to think again.

I really had no idea where I was driving and went this way and that, as I had a (very) vague idea of where I was; it did occur to me that I had better get home before Charlie and the bus, to provide a tidy ending to this follow-the-buscapade. I bumbled my way onto the state highway in time to spot Charlie's bus going in the opposite direction. There followed a ridiculous bit of driving too far in one direction and some frustrating madcapa moments on dead-end streets that I won't bore you with---my ineptness behind the wheel in New Jersey in particular and in general is legion---I was a real late bloomer taking the wheel, only getting my driver's license after I had graduated from high school (a really weird thing to do for a native California) and then only really learning how to drive post-graduate school. I have, as Jim 'Mr. I Can Find My Way Anywhere in New Jersey' himself notes, improved a lot over the years of driving Charlie to doctor's appointments, therapy sessions, and let's-kill-the-time excursions over the years.

All's well that end's well: As I drove down our street, I saw no yellow school bus flashing its red light in front of our house. Indeed, it was another ten or more minutes before the bus pulled up. Charlie had had one rough moment at school (awareness of the impending month-long break? not liking his lunch and so not having had much to eat? getting over-irked by some kid music he had chosen from the library?). As the bus aide related, he'd been perfectly fine on the long bus ride.

I'm suspecting that he may even be enjoying it.

Just as all that paintaking slogging through 3 declensions of ancient Greek nouns, 7 tenses and 3 voices of verbs, and 2 types of verbs ('regular' ω-endings and contract stems)---all in the truly doggish days of this summer's hot hot weather---has paid off with my student able to read a passage in ancient Greek, so all that bus-prep seems to be  'translating' into a boy who can ride the bus and in a peaceful-easy feeling fashion. You read about this sort of thing happening and you realize how much care and effort you yourself must and can expend to make sure your child will be all right and if you make a fool of yourself in the attempt (nearly getting lost 13 minutes from your own house after you lose sight of the bus) so be it. Why get GPS when you can have such adventures, however mildly hair-raising?

You never know: Perhaps Hermes---the messenger god but also the god of travelers---has been riding along on Charlie's bus, too.

*The translation is somewhere in the text above.

Posted at 21:11 in Classics, Education/School, My Teaching/Job | Permalink | Comments (3)

Ha! You were a driving prodigy compared to me...I didn't get my driver's license until I was 29! Of course, I'd lived in New York for 28.5 of those years, and got my license within a couple of months of moving to LA. But, still... ;-)

Sleuth! Harriet the Spy? Utmost parent fact-finding. The CIA has nothing on you ferocious Mom and good for you.

@Linda,
Funniest moment when I went down the hill and spotted the bus going the opposite way on the state highway!

@TC,
Ha, I was really more like 30something when I finally got driving down! Parking, another story.

I think I had this hope that I could just avoid driving. Impossible, of course, to be a parent around here and not get behind the wheel.