It Changes Just When You've Accepted It Won't 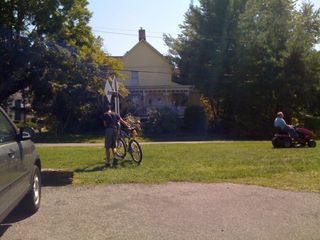 In a public restroom, I was waiting to wash my hands. There were two children at the sink, a boy and a girl, both dark-haired. An Indian woman was talking to the girl and waved her hand in front of the motion sensor on the paper towel dispenser, then handed the girl (whose hands were still beneath the running water) a towel. Another women, blond and wearing white jeans, was standing just past the girl's mother; the door opened and another woman in a uniform---a worker at the restaurant we were at---walked in and, seeing the small crowd in the small space, walked back out.

The woman with the blond hair came forward and I moved back and then to the right as I realized she was going to stand behind the boy. He was just a couple inches shorter than me and, like the girl, quite engaged in washing his hands. The blond woman started speaking (in Spanish) at length, about (I guessed) washing his hands, as he continued to do so.

I washed mine and left and thought, it's been a long time since Charlie came into the women's restroom with me.

There was a time, of course, and a fairly recent time at that, that Charlie always did. I always felt a huge sense of relief when the stall for persons with disabilities was free as it gave the two of us more space to maneuver in, especially as Charlie got taller.

Of course, as Charlie got taller, as in as tall and taller than me, it became more and more awkward for him to be in the women's restroom (in the event that I couldn't locate a unisex restroom). No one ever complained; indeed, whenever I explained why Charlie was in the woman's restroom, people were more than understanding. Even in a venue that seems 'as safe as can be,' you can't know what happens after the door of the men's room shuts. If anything did happen, Charlie would not be able tell me.

But like I said, it's been a while since I had to bring Charlie into the women's restroom. At the moment, we don't go to places like malls or movie theaters anymore (and those sorts of places are now more likely to have unisex restroom facilities). When we've been out, it's mostly been all three of us, so Jim can accompany Charlie to the restroom. And, Charlie being older, we haven't had to worry with anything like an accident in quite some time.

I'm not sure if the boy I saw washing his hands in the women's restroom yesterday was on the spectrum or had any sort of disability. Perhaps his mother was just worried about him going into a public restroom on his own, something I can certainly understand. I was reminded of how finding a place for Charlie to use a restroom, and having again and again to go through those moments of registering the questions on other womens' and girls' faces and explaining the situation as efficiently as possible---how these dominated my thoughts whenever we went out. Charlie himself was well aware that something like an accident was not right; if any such thing were to happen, there was not only the issue of clean-up, but of an unhappy child. Until quite recently, I still carried a complete change of clothes for Charlie in my bag and, indeed, came to think that the day might not come when we could do without those.

And at that point, I didn't feel mad or defeated that I was still carrying that change of clothes. I wouldn't have wanted to hear this when Charlie was a toddler or 5 years old. Over time, as our understanding of Charlie's abilities and challenges, his limitations and his strengths, has become more refined, I found myself just accepting the plastic bag of clothes in my bag as just another thing I needed to schlepp, along with my wallet and phone.

And now it seems we can leave the extra clothes at home.

I do have some extra clothes in the car, though. Now that we seem to be into this drive-and-bike mode, you never know when dust, dirt, mud, rain, etc., might strike. (Yes, there's extra clothes for Jim, too.) 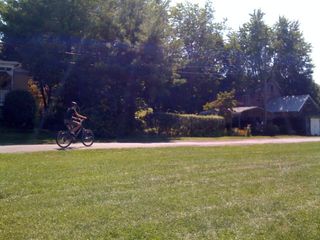 Charlie 'only' did around 14 miles total on his bike Saturday. He preceded his ride with a mid-morning, post-brunch-munch session and then a snooze on the old blue couch, during Jim met with one of his graduate students and I did a long list of long-left-undone tasks, thinning out the piles of papers we have stacked in too many places and writing a letter of recommendation. Then, with Lester Young and Charlie Parker streaming from the radio (during their birthday broadcasts), we drove back to New Jersey horse country for a bike ride on a blissfully beautiful blue sky day, following which Charlie took another nap. He got up and asked to ride in the white car, which gave us another chance to hear those birthday broadcasts (they're going on 'round the clock till Monday) and to discover that Charlie has a new musical interest.

Charlie often puts his hands over his airs when he hears female singers, emotionally when their voices rise with emotion. But he sat at attention to hear Billie Holiday sing several numbers and together we listened to her voice on the short ride home.

Well, it seems that my attempted comment was stomped upon, squashed flat, and made to disappeary by all the fancy broadband shiny vajazzling software with the bells and whistles you have here.

Ma'am, could you take pity on those of us who are still on dial-up, and put up a plain, quick-loading easy-to-read version of yer site, without all of the blinkenlights and Flash, and all?

Love the title of this one, Kristina. So true. So true.

@justthisguy,
sorry!
You can always email me a comment---I guess that's not the same as leaving one---I do confess of some fondness for the graphics and such here.

@Barbara,
I guess you could say the title is a bit of a mantra ever to keep in mind--

I run into this all the time with three boys. Fortunately for me, I can usually put my oldest in charge of Jack and my youngest, which helps, but it is stressful.

But as they say, the only constant is change, right?

This also happens to me all the time. I have 7 children and 2 Autistic. When I take my son to the bathroom sometimes the same thing happens. I tried to send him with my oldest child but that is hard because even though my oldest is 18 he is Autistic as well and it can be a situation. Sometimes goes well sometimes doesn't.

I try to email you but my email continues to say that your email isn't correct. can you send me you email? gladys@ewell.me

Hi Gladys, so sorry about that---I'm at kc@kristinachew.com. I'll send you an email.

My main thought is, more unisex/disability accessible restrooms would be very very nice.

Public toilets - this is something that I've thought about quite a bit as Dimitri gets older. It's not that easy to take him to womens rest rooms any more. Definitely needs to be more disabled access toilets - as Dimitri needs help with his clothes, it's kind of a squash for the two of us to fit into a regular stall. I like the campaign in the UK for toilets with hoists http://www.changing-places.org/, even accessible toilets aren't accessible for everyone, it really affects where people are able to go, and how long they can go out for.

I've been keeping up with your posts, it's really great to see how Charlie and you all are doing this summer:)

This was a great post, and timely since I just wrote today about I know things will change one day, just when I've accepted our current situation. Thanks for this reminder. I look forward to reading more and following you on Twitter now.

Thanks for that link, Emma! es, access to restrooms has definitely been a factor in how far, and therefore where, we've been able to go----I wouldn't say the sky's the limit but it is nice not to have that extra 'bulk' in my bag (Charlie's clothes now being pretty much adult-size now).

Thank you, Alysia, it's great to hear from you! Am checking out your blog too. One just never knows, no?