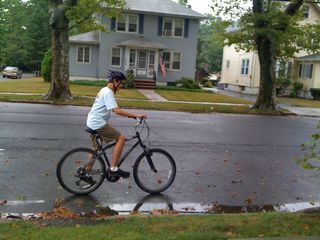 Charlie picked up the phrase 'raining'---sometimes he says 'it's raining' or (bonanza! a whole sentence) 'it is raining,' with a big accent on the 'rain' part, so the second part almost sounds like a separate word----from watching a video on YouTube. Or maybe from two videos, one in which children put on raingear and got outside to splash in puddles, and another in which some children fill a wading pool using a hose and slide into it.

One might think that only the first video is relevant, but I think Charlie uses 'raining' to refer to both as both videos are about water. And now that I think about it, a (quite shallow) inflatable pool isn't that different from a (quite largish) puddle.

There have indeed been a lot of puddles around here as it was raining Sunday, and yesterday. And it's supposed to rain on Tuesday (i.e. today) and Wednesday.

In our new spirit of 'the heck what the weather is, we go out!', Charlie and Jim began the day with a bike ride in light rain which faded off and then came back in more of a steady way. Consequently, they were both drenched when they returned and showers and changes of clothes were in order, and then Charlie announced that he was taking a nap. And did. And woke up after about an hour and he and I went (in the rain) to get a few lunch items.

On returning, Charlie looked through the photo pile and one (alas!) disappeared into the famous crack at the top of the stairs. Jim signalled this unfortunate news to me, as those photos, being taken in the 'pre-digital age,' are mostly one of a kind. Jim and I also communicated (mostly non-verbally---guess being the parents of a minimally verbal child makes one a bit adept in such) that we were not going to get at all upset about any disappearing photos, as we have in the past.

And off they went on bike ride #2.

I used the time to attempt a little maternal subterfuge. I went through the pile of photos and hastily selected the ones I really really treasure: Charlie being carried by Ngin-Ngin. Baby Charlie beside my cousin's daughter who is just a week older than he. Charlie wearing a University of St. Thomas sweatshirt. Charlie in a snowsuit our first winter in St. Paul. Charlie aloft on Jim's shoulders at the top of the steps of Blair Hall in Princeton. Charlie holding Jim's hand and on the banks of the Mississippi just before taking the ferry at Golden Eagle over to the Illinois side. Charlie wading in Lake Superior, both hands in Jim's, in Duluth. Charlie with face pant and some rabbit ears in the hallway of Corpus Christi Hall where he went to daycare, quite oblivious of the big orange paper pumpkin all the other kids were oo-ing and ah-ing. Charlie at Creative Kidstuff on Grand Avenue in St. Paul two days before his 2nd birthday, pushing a train on a track.

He hadn't yet been diagnosed with autism in so many of those photos. I love looking at my little boy when he was, indeed, little. I've also come to value these photos because I can see so many signs now, signs that Charlie was autistic.

His being so often near the CD player, his stacking cups, his toy V-tech laptop.

The awkward way he held his body. Charlie was only really able to walk at the age of 16 months.

The way his eyes were sliding off to the side.

I put all the photos into a ziploc and stowed them in my bag. Yes, I'm spiriting them off to an Undisclosed Location tomorrow.

As for the photos that don't make it into the photo equivalent of the Witness Protection Program? I left most in a big pile on the floor. In going through them, it occurred to me that we really don't need seven photos of Charlie looking very groggy in front of  bowl of mashed potatoes in Thanksgiving of 1998, or all those photos of the three sheet cakes my parents purchased for his red egg and ginger party back in 1997. Believe me, my preference is to keep all the photos, but Charlie needs some too (or maybe more than that). Even if they end up in the crack.

After all, even in the crack, they're still in our house!

On seeing a corner of the photo peeking out of the crack, I did pry it out and photograph it. (Yes, this taking photos of photos that Charlie might stick in the crack is becoming a bit of an obsession. But these photos are, like I said, precious.)

Charlie and Jim came back soaked once again so checking the photos was not Charlie's first priority but----you guessed it---another shower and another rest (napfree, this time), followed by another ride, this time with Jim taking the wheel. We ended up at the mall for the one reason that I go into it. Jim and Charlie stayed on the outside of said mall (and were quite happier there).

When we got home, it wasn't---drum roll---raining. Charlie at first asked to use the computer but Jim must have magic powers of persuasion. They donned their matching sweatshirts and went for bike ride #3 and---another drum roll----returned virtually dry. 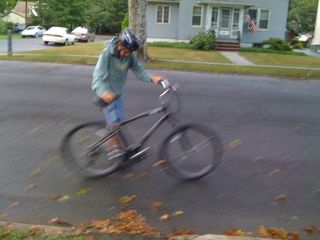 And to think we used to fret about how we'd spend a day at home, much less a day smack in the midst of Charlie's vacation from school, and a day of (virtually) mostly rain. 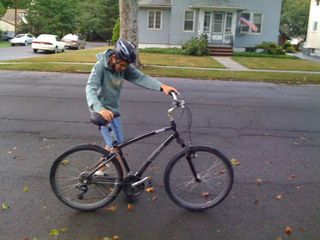 Gotta be the triplets, and "Put the hose on, Mummy!" amirite?

and the puddling pool!

Ever considered filling in he crack with wood putty? Or would Charlie be upset if it wasn't there anymore?

A couple of years ago Jim and my dad filled in the crack with such and Charlie pulled it all off!

How about simply scanning the photos and printing/laminating the copies for Charlie to do with as he pleases? The good news, the photos aren't lost forever...just until you tear out and re-do the stairs. ;-)

There must be a more permanent way of filling in the crack or how about calling in a carpenter to install a pair of inconspicuous hinges so the board can be lifted and any items therein retrieved?
Maybe Charlie is "mailing" the photos and he doesn't realize that they're almost impossible to retrieve once he slips them in there? The action of sliding the photos into a slot must be alluring to him, or it was at one time and now he does it as a matter or course. Could a file box with a slot in the top be introduced as a replacement?
It's such a little kid thing to do, isn't it? My youngest son was about three when he becam enthralled by a tiny key that opened a curio cabinet on our living room wall. He used to climb on a chair and lock and unlock the cabinet until the key dropped into (surprise! A crack in the floor). You can imagine the screaming and wailing that ensued. Secret hiding places are irresistible.

I think Charlie's always found the notion of putting something into a little slot appealing---he does understand that what gets put in there doesn't come out and sometimes I've wondered if he actually no longer wanted to see whatever he shoved in there. Will keep the carpenter idea in mind.

And he actually took the photo out!

(It's actually kind of hard to shove anything more into the crack---the CDs kind of filled it up).