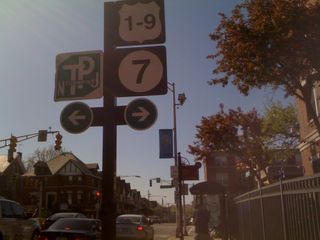 We were on our way to Jersey horse country for a bike ride yesterday morning and ended up taking a slightly different route. We knew where we were, but not exactly how to get to the road that leads to the town where the bike path is. Jim said, 'Let's look at the map' and I pulled out my phone to check GoogleMaps, and, in the backseat, Charlie froze up into anxiousness.

The moment passed and faded. We made some turns and soon found our way, and Charlie sat up straight and looked around eagerly.

He really has a terrific memory for places. The abstraction that is a map or, too, a globe, is hard for Charlie to grasp, though we've certainly tried to show him maps of the US to explain how far we have to go to see my relatives in California. I remember that my dad told me about how, when I was in college here in New Jersey, he and his sisters tried to show Ngin Ngin a US map, to give her a sense of where I was. But it was hard to explain to her that the colored outlines of the 48 contiguous states represented the geographical distance that lay between them and where her youngest granddaughter was.

The best way for Charlie to fathom those 3000 miles from the east and west coasts would be to drive it. We're not yet ready for such a trip, but I do foresee one in our future---indeed, Jim and I would really like to make such a trip (here's another family, Jennyalice's, who's doing so this summer), not only to give Charlie a sense of where California is in relation to where we are now, but so we can stop at the places we used to live in, St. Louis and St. Paul. It will not surprise us if Charlie remembers, with great exactitude, the streets (such as Selby and Snelling and Summit Avenue, and Lindbergh and Chouteau and Gravois) we once traveled.

But back to New Jersey. We were soon at the bike path after our minor detour and Charlie and Jim biked the trail in two directions. Charlie was slow-going on the first part, which is hilly and tree-shaded. He picked it up on the second part of the ride, which went down by a river and is more  wide open;the  only snafu was a brief encounter with an unleashed dog which led Charlie to debike and make a brief run for it. (He came right back, after the dog's owner produced a leash.)

We may need to make a visit to the barber soon as, after working up a good sweat (even with it being not at all as warm as the first time we did the path earlier this summer), he'd ended up with bike helmet hair, with two lines of hair plastered down and three standing up tall---Charlie and Jim had done 13 or so miles. Getting so hot didn't seem to irk Charlie, who sat grinning and joyful in the car as Jim and I quickly reloaded the bikes on the rack. As we drove back to the highway, Charlie turned his head rapidly from side to side, occasionally sitting still to focus his eyes straight on the window.

He must have the imprint of roads upon roads in his memory. I wonder if he sometimes gets struck by a sense of déjà vu but not quite, when we go someplace that resembles, in a shadowy way, a certain bridge over the railroad tracks in the Merriam Grove neighborhood where our rented second-floor duplex in St. Paul was, or a street out in West County around St. Louis, and he tries to figure out where exactly he is, and wonders how that streetscape got into his mind.

When we lived in the Midwest (from the time Charlie was born till 2001), we drove back to the East Coast almost every summer. So I do think Charlie may well have a sense that places like St. Louis and St. Paul are 'far off,' though not in a precise kind of way. Certainly when we lived out there and Charlie was little, we had no idea we'd be back here in New Jersey, and, even more for sure, watch him glorying on a bike the same size as Jim's.

The path through Autismland is indeed mapless. There are more guideposts and markers and suggestions for directions and even something like sketches of maps to consult than once there were. But, as the years pass and Charlie gets older, it still seems to be the case that we all have to make up our own maps to find the way.

I wouldn't say we're the best of cartographers---we tend to follow a trial and error (try this path, wander, search for a way) sort of method. But Autismland seems ever to offer new, unexplored territories.

And into them we shall go.

He's an engine driver, on a long run.

And us along for the ride of our lives.

My (in the moment) thought in anticipating a cross-country trip for your family was to wonder if Charlie can understand each next day will be a different path - ?

I'm enjoying jennyalice's journal of their trip, too!

The map analogy is so right on. I never thought of it that way before. Our children, at all levels, seem to be the tip of the iceberg and everything that is done or not done is an experiment. Hopefully we will figure out the map so that there will be a clearer future road for all of them and maybe those that come after will also learn from our experiences. Something has to give for someone.

Lovely post. Yes, we've got lives filled with detours and twists and turns, and some unexpectedly lovely places to visit and some that we hope we don't ever have to wander by again. :-)

@Barbara,
Am trying to think a lot in advance about how to prepare Charlie for such a cross-country trip! I'm planning on working on a pretty extensive social story/memory book with lots of photos. If we can do it, it'll be an epic trip!

(Plus, we have to drive back from CA to NJ!)

@Elise,
Everytime I think we've found 'the way,' seems like we're going down another detour!

Though I have found reading the accounts of parents with kids about 5-10 years older than Charlie very helpful, especially with thinking about housing/residence, work, the end of school (gulp). And for getting ourselves started on things like a special needs trust and guardianship. Wondering what it will be like when Charlie is in his 20s a lot of late----

@Kim,
I can think of more than a few puddles, quagmires, and quicksandish places we've found ourselves in that I hope we can permanently steer clear of!