Parents Get The Growing Pangs Too 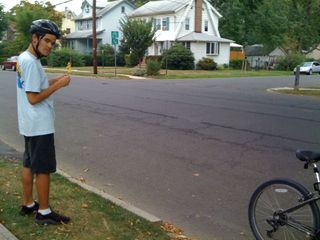 Hard to read about the father of an autistic child getting punched by another customer in a Boynton Beach (FL) Olive Garden restaurant and not think, now who was displaying 'inappropriate behavior' here?

Another thought comes to mind, though, which is how we now rarely eat in restaurants with Charlie.

Once, we did so almost every week and not just in family-friendly chain kind of places and diners. Cramped Vietnamese restaurants, a lovely Spanish place (Charlie loved the 'yellow rice' and the never-ending baskets of soft bread), many a Chinese restaurant with a multi-course meal on visits to my family in California, a couple of Japanese places (Charlie's fondness for sushi is long-running), a couple of Middle Eastern places. We were mindful of Charlie's tendency to request to go to the same places over and over and tried to 'mix it up.'

As Charlie got older, and with his speech increasing, he started to be more particular about where he wanted to go and very strong with the no's about places that he did not. We didn't know then about the pattern of Charlie asking ardently for an increasingly few things, Charlie getting whatever it was, Charlie having some sort of neurological storm/explosion. Perhaps if we had, we would have been more insistent ourselves on 'mixing it up,' but for a couple of years it worked very well just to go to a few places with an occasional new place thrown in here or there.

Even while Charlie was having a lot of trouble at school in 2009, he was still a regular visitor to various New Jersey diners. It's just been in the past year that restaurants became pretty impossible. We're not entirely sure why; it does seem that, for one thing, being at a restaurant with its tumult of olfactory/auditory/visual and other stimuli just became too much for Charlie, certainly for the duration of the meal. We did observe that he was eating less and less of his meals. Attempts to order different foods were met with very strong no's and when you're in a booth in a smallist diner, it's not a great moment to be insistent on trying 'something else.'

(If you sense that I'm hinting that Charlie may have been more than 'loud' in a restaurant at some point or other, you are right. Fortunately, both restaurant staff and other customers have been, for the most part, kindly towards Charlie and us; for our part, we have long gone out of way not to make Charlie dining in a restaurant positive and pleasant for all parties, to the extent we could.)

To be quite honest, neither Jim nor I miss eating out. I'm not entirely sure about Charlie's thoughts on the matter, but he doesn't act for the diner, etc., and, when we do get him something 'to go,' he is visibly relieved to be back in the car (and away from the oppressive strains of piped-in Muzak). Charlie being well past the age when he can be carried to safety, and being of the size when something thrown really gets thrown, Jim and I have accepted that, for now, the benefits of eating out (all that social skills practise) are minimal.

Back in the day, we were quite proud of how it seemed that we could 'take Charlie anywhere' and he'd be 'the perfect gentleman.' One of the difficult things about Charlie entering adolescence and growing up has been that we, his parents, have had to accept that things are not going to be as they were when Charlie was younger. And, too, that (surprise!) what we parents might think good to do, is not necessarily what Charlie wants to do.

Burrito and chips and soda in the car, check yes.

Steaming pot of paella marinara in a restaurant with cloth napkins and sangria, um, no.

Maybe one of the harder things about Charlie growing up and changing is the need for we, his parents, to change too. Often I feel like we're the ones with the lag, a couple of steps behind in figuring out that Charlie is trying to tell us, he's ready for something different.

Parents can have growing pains---pangs?----too.

None of this is meant, of course, to explain that Olive Garden customer assaulting the father of an autistic child. We parents of kids with disabilities are forever trying so hard to do the right thing to help our children make their way in the world, being attacked (literally in the incident above) is a lot more than a slap in the face, literal or figurative. Often I've found being the parent of a child like Charlie renders one (regardless of gender) like a pregnant woman: Everybody has an opinion, if not advice.

And for every setback, there are gains, albeit often quiet ones.  Charlie had really been trying to tell us that eating out is not for him, before he finally just exploded one evening. Perhaps he'd felt this way for years, but didn't know he had the option of not going.

On a similar note. Tuesday morning Charlie woke up at 3.30am. In the past, he would have been of the mindset that 'once I am up I am up' and would have insisted on going downstairs, going for a walk, getting in the car for school. Tuesday he instead asked to use the computer and, too, on his bed. Pardon me for indulging him with 'YouTube in bed,' but Charlie watching the laptop while stretched out on his bed meant that we could snatch a little more sleep ourselves.

And then, after 40 minutes, I heard Charlie say 'all done' and 'give Mom.' I went to get the laptop; Charlie looked up at me and said 'good night,' and went back to sleep.

And woke himself up at 7.30am and (unusual for him), crying. He continued to do so as he packed up his things to get in the car and Jim got ready to go. We kept up a guarded peaceful-easy feelingness and by the time I waved Jim and Charlie off from our front porch, Charlie was calm.

Today is his last day of summer school. There's been the inevitable bump and yowl and, yes, incident reports but it's really been a lovely summer, with a happy boy. I think Charlie's going to miss school and his teacher and aides and classmates and (who knows?) the bus ride home; going to feel a pang at missing them.

I'm feeling it already, too.

I'm aghast at the level of anger displayed by the man in the story. They had been there an hour apparently so maybe alcohol was a trigger but the fact that he went directly from an angry demand to keep the boy quiet to throwing punches is frightening.
If I could guess I'd say there was alcohol abuse (and possibly other substances), financial anxiety and an underlying seething rage that triggered the attack.
I feel very sorry for everyone involved, except the troglodyte who threw the punch.
We had a similar experience on a flight back from France a few years ago. My hubby asked the woman seated in front of him to move her seat back a little bit (hubby is very tall) and the woman's husband jumped in and started cursing at my husband and generally ranting and raving. And yes, he'd had a few drinks. We called the flight attendant over and she told him to settle down ad cut off his access to further in-flight alcohol. It was disturbing for my kids to see but thank God no punches were thrown.
I feel sad that your world has grown smaller since Charlie has become more sensitive to crowds and noise.

I was wondering about alcohol too. Requests for less noise are understandable, but that man's behavior was completely out of line.

That sort of experience you describe on the airplane is yet one more reason that we are avoiding air travel in the near future and beyond!