On Photos, Pizza, and Keeping the Peace

Charlie came running up the stairs from the basement with a huge smile Saturday evening and something in his hand. I asked if I could take a look: In the past, when Charlie got hold of something he knew was meant to be kept from him, his response was 'no, no,' and he might get angry. But this time, still smiling, he showed me. 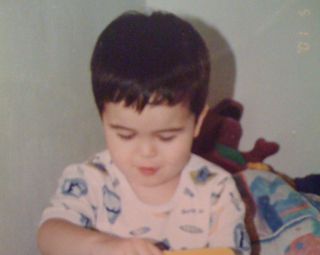 It was a photo of him when he was four years old, sitting on his bed and opening a Peanuts lunchbox containing wooden beads that he liked to string. But I knew that was not why he was so happy to have found this photo. He was overjoyed because, in the right background, is a stuffed purple dinosaur, the says-100-things-when-you-press-his-hand Barney who Charlie received from my parents on his first birthday (I remember them spotting the Purple One at a Toys 'R' Us in St. Louis, showing it to Charlie, and placing it into the shopping cart) and who, until Barney went to Toy Heaven (the garbage can), was one of Charlie's favorites.

Charlie placed the photo on his bed amid his worry beads and things. After he was asleep, I took a photo of the photo. In the past, he's placed many photos and CDs that he really liked in a crack at the top of the staircase from which they can't be extricated and I wanted to make sure, regardless of the photo's fate, we still had the precious image with Barney in the corner.

Sunday morning we heard Charlie get up, shower, and go stomping around the house. When I came downstairs, I found two bags full of photos set side by side in our living room.

I decided to leave the bags of photos right were Charlie had placed them. There was a time---when Charlie was 6, 7, 8---when I had to scheme to hide most of our photos. Charlie was fascinated with them, and with shoving them down the crack in the stairs, or ripping them into tiny pieces.

Digital cameras and JPEGs have solved this problem. Most of the printed-out photos that we have are of Charlie when he was a baby, toddler, and preschooler, and they're extremely precious. I can study one for hours, recalling what Charlie was like and what we were doing and where we were living and how I'd never thought we'd be living here in our own house in New Jersey, with Jim and me both in tenured professor positions. I didn't think (didn't want to think) that Charlie, at age 13, would still not be able to read and would have left public school classrooms for an autism center.

Those old photos capture the days when we did a lot more biomedical sorts of 'treatments.' Charlie was on a very strict gluten-free casein-free diet and nothing made of wheat or with dairy ever crossed our threshold. The list of what he didn't eat or drink was very long, and you can be sure that things like soda, bagels, pizza, etc., etc. were on it. Charlie was 8 when we started to see that 'the diet' was becoming more of a hindrance than a help: Being well aware of what he could not have, and that soy cheese pizza just ain't the same as a good slice, there were several times when Charlie grabbed and took a bite of strangers' pizza, or reached for and sipped from another commuter's drink on NJ Transit.

I'm sure Charlie knew he wasn't supposed to do this, and, too how determined we were not to 'contaminate; his system with any of that.  But the result of our efforts was not a lessening of behavior problems, but new ones. For instance, knowing that he could not have soda (that caramel color in Coke contains gluten.....) when he was little, Charlie and I had some 'interesting' moments in stores. He would  find his way to the aisle where the sodas were, opened a bottle and drank as fast as he could (quite a bit of Mountain Dew, once). I'd get very upset and there'd be Drama---just the sort of thing that guaranteed that Charlie would try to run for a soda next time we were at the store or if he saw someone at a restaurant with one.

When we took Charlie off the diet (after being a strong proponent of it for years) and got pizza and gave him a slice, he at first gorged himself. If there was soda, he got some too, or cupcakes, or donuts if someone brought some to his class, or whatever. And while he'd once seemed to have some reactions to foods with wheat and such, we no longer saw these.

And over time, with access to anything, the result?

Now Charlie turns his nose up at pizza. And cupcakes and cake, no matter how thick the frosting. He doesn't grab drinks from strangers. (And this summer, he's been much more inclined to help himself to water, especially when it's chilled in the fridge.) Often he takes a few sips of a soda and dumps the rest in the sink, as if he just wants a taste.

As if he just wants to feel less coerced, less surrounded by a thicket of  no you can't do that's. Charlie is so aware of all that he's not allowed to do and, increasingly, of what he can't do. Often I think we tend to over-scrutinize him, when we just need to let him try out things on his own and then, let it be.

I'm applying this same strategy to those precious photos. If one disappears, we won't make a big deal of it.

But I don't think they will. While highly sensitive, Charlie can handle quite a lot more than is often thought.

Just as a lot of hot hot humid, roasting days didn't keep him (and us) huddling inside 'round the air conditioner vents, so too a little (at some moments, a lot) of rain can't keep some boys from their bikes. After hanging around at home on a rainy Sunday morning till it cleared up, Jim and Charlie rode off on their bikes, got drenched, and the sun came out as they neared home. After showers, a good nap and a good lunch, we got it in our heads to go out to the country bike path in central Jersey. It poured as we drove and then stopped. We came to the park and just as Jim and I were undoing the bikes from the rack it starting again. But it stopped pouring, if not raining, after five minutes.

Here's Jim and Charlie switching bikes after realizing they were riding each other's. 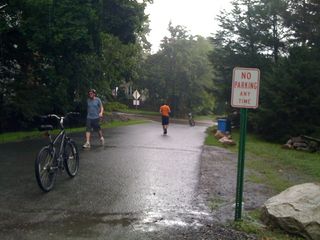 It rained more while Jim and Charlie were out riding. No big deal to a boy who prefers the ocean, and Jim channeled his old days as a caddy carrying two bags of golf clubs and two umbrellas (neither for him) and they rode through the rain. They went for 10 miles by the end of which, there were little flashes of light amid the clouds. The bike trail was dusty and gritty and I was glad I'd packed extra shirts and shorts in the car. 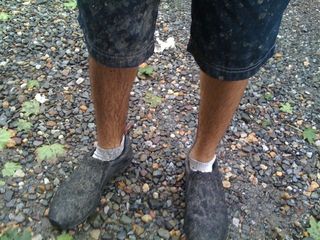 (Charlie looking like he just finished a motocross competition.)

Jim spotted a rainbow off in the distance as we drove home. Kid you not.

And back in our house, as I was saying good night to Charlie, I spotted two photos, both with toddler Charlie and Barney, set side by side on his bed.

I would love to go swimming with Charlie. What I want to know, is that if I were having a hard time and fixing to drown, would Charlie take pity on me and help me to get ashore? Have you asked him about such things?

How very lovely, Kristina. Our kids grow in ways we aren't expecting and surprise us when we least expect it.

Bobby didn't read until he turned 14, and as we wait for his transportation to get here to take him to the day center, he's regaling me with bits of the book on vampire myths that he's reading while we wait.

We still have his Barney, Baby Bop and BJ; they were passed down to his sisters several years ago.

I made sure to take a photo of Barney photo #2. You just never know! (I think a few photos may have gone down the crack in the stairs but I'm attempting a Clever Ruse to keep the ones i like most from that fate).

I hate to say it but I'm not sure that Charlie would know what to do if someone were having a hard time in the water!

Yesterday I was looking for some pics from a support group we used to go to back in 2002/2003 that is holding a 10 yr reunion.

I found some pics of Matt in his first EI program when he had blonde curly hair. As an infant he had red hair, for years now it has been dark brown.

Matt loves to look thru photo albums and has torn some photos over the years.

@Bonnie,
So great you found those photos. The ones of Charlie in daycare (1998-1999) brought back tons of memories. I started to wonder where the other kids are now.

I've never been able to keep up with photo albums. I usually have just put everything into a box or bag and that system was ok until Charlie was about 5 and started to go through the photos himself.

No ripping so far. And, he did put one photo in the crack in the staircase, but took it out before going to bed.