Home Archives Profile Subscribe
Just a Few Words, Lots of Action
We Came We Blogged We Talked (face to face) 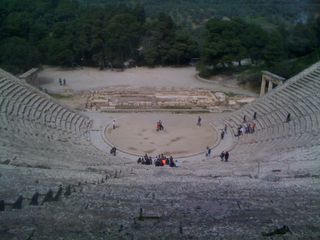 As a final assignment, I asked the students in my summer school class on ancient Greek drama to write about what they understand 'tragedy' and 'comedy' to mean; to describe a movie that they consider a tragedy and another that they consider a comedy; and to write about an experience that could be considered 'tragic' but that they were able to get through by having a sense of humor---by referring to comedy. As expected, I had not heard of many of the movies they mentioned (and seen none except for West Side Story). The students' responses to the last question were often the briefest, but the ones that left me with the most to think on.

I had this post, Autism: Not Exactly Heaven on Earth But Not a Daily Hell (written just over 5 years ago, on the 25th of July, 2005), in mind when I composed the 3rd question about 'an experience that could be considered "tragic" but that they were able to get through by having a sense of humor'; of the comedy of it all.

I'm so used to hearing about autism as a tragedy. Even with all the difficult things that have happened to Charlie and us, I know that it is not. For me, even the worst, worst moments become tempered, infinitesimally at first and then more and more over time thanks to small doses of comedy; of understanding how we regularly encounter la comédie humaine in all of its glory and its dirt, its gold and dross, in our basic daily doings with Charlie.

Buying (or rather, attempting not to buy), a red box of brownies.

Going on a walk. On walks.

Indeed, the last-linked post, Sleeping With the Garbage, was subtitled Notes Toward the Autism Comedy. Five years ago, I wrote about a period when:

Five out of seven evenings, Charlie picks up the kitchen garbage can--lock, stock, and barrel full of apple cores, coffee grounds, empty juice packs, junk (snail) mail, uneaten cereal and hot dogs--and carries it, in happy glee, to the foot of his bed. After he's asleep, I sneak the garbage back downstairs, tie up the bag, and Jim takes it out in the middle of the night. Whether you're disgusted, or baffled, or pitying we who, in the middle of the night, hasten out to the driveway with a smelly trash bag---we've grown accustomed to a certain laugh-with-sigh combo when Charlie stomps past us, can in hand, and mounts the stairs. Jim used to groan at the scent of my "graduate student coffee" infusing our living quarters, but Charlie does not seem to mind the scent of day-old fish fillets one iota.

As to why Charlie, back in July of 2005, felt that he had to to sleep with the kitchen garbage can at the foot of his bed, you may read the rest here. Over the years, there's been many a thing that Charlie has done that isecht Charlie to Jim and me, and that once caused us to fret mightily, and then somehow faded away and became the stuff of family history and, yes, shared chuckles between Jim and me.

Charlie himself seems to think it's funny to mention the things that used to bother him and, well, not be bothered. This afternoon (after furious-fast bike ride #1) he was using the computer and suddenly, on catching my eye, said,

At one point I had a whole didactic spiel and would go into how 'we used to have Barney and now he is OLDer and we DON't.' Now I find that something a little more simple does the trick. So I responded:

To which I replied, echoing his intonation,

'Barney, Baby Bop, BJ!' (Haha we don't have the plate anymore with Barney and Baby Bop or the videos or the stuffed Barney and it's okay haha!).

Well, that parentheses is what I think is Charlie's tragedy-into-comedy spin on the loss of the Purple One and the accompanying Backyard Gang. Certainly it seems that Charlie is as tickled pink as Jim and I are, to see how he's now able to talk about past sorrows and even to laugh at them.

Earlier in the day Charlie had had to deal with something that most definitely makes him nervous, anxious, and the like. A therapy dog visited his school. Charlie would not (as his teacher wrote) go into the room with the dog, but he did stand outside it the whole time his classmates were checking said Fido out. Perhaps one day he'll look back and laugh at how he once had severe dog-fear---severe enough that for a time, on meeting Fido, he was running, or jumping off his bike lickety-split across the street without bothering to check for cars.

Before abandoning the bike Charlie always (as Jim related) put down the kickstand and left it carefully parked, albeit sometimes in the middle of the street.

Things like that are one reason why I wrote that:

even on the tough days, as chronicled in Why Charlie might sometimes be a tiger, but never a tragedy (#15) and Not a bathroom story; or, more on Charlie's words (#11), I know my life with Charlie--Jim and I know our life with Charlie--is the best that can be, and we only love our feisty guy all the more in his struggles as much as his triumphs. Some call autism 'a daily hell' on a par with the suffering of the inhabitants of Dante's Inferno. I have tried to show that, while Charlie's and our days are rife with awful, messy doings that contain words like "self-injurious," "helmet," and "severe," life with autism, however tough and messy (literally and figuratively) is not a tragedy.

When a child is diagnosed with autism, one can never think (as Dante read on the gateway as he was about to enter the Inferno) "Abandon every hope, who enter here" (Canto III.9).

We get new hope all the time from Charlie who, against some very tremendous odds, continues to show that he can learn and grow and laugh at his former woes. And get us to laugh with him, too.

The title and theme of this post must be a truism of life. Classic.

Many people react to kids like Charlie with fear and pity, which, as you know, were the two emotions that Aristotle believed were elicited by tragedy.
Of course people with autism sometimes do pretty strange stuff, like sleeping with garbage, but that's no reason to fear or pity them,
My fellow teachers and I used to spend a lot of our down time talking about the bizarre stuff our students did and asking, "Why do they DO that?'
One boy's fascination with his wiggling fingers was particularly perplexing. He'd hold his palm up to his face, wiggle his fingers and laugh and laugh. If he wasn't redirected, he'd happily do it for hours on end. My colleagues and I even tried the finger-wiggle to see what he got out of it. I'm sure that if someone had walked in on us it would have looked really strange.
We didn't solve the mystery of B,'s fascination with his fingers, not did we figure out why R. would clap his hands VERY loudly in front of his face, always twice, then pause and twice again. The routine never varied and we never figured out why he did that, what it "did" for him.
As Charlie's mother you have the inside track to understanding why he does things but I'm sure some of it is and always will be, a mystery.
That's one of the fascinating things about autism. Some authors who have autism have written about their motivations and compulsions and the explanations always make perfect sense.

Mars and I had a laugh too with his music teacher when he asked if she liked Beethoven's "Fur Elise." Our ever upbeat Godmother of Music, Mars calls her, furrowed her brow. I told the Godmother about the baby grand I had seen in a skilodge with the sign, "Fur Elise may not be played on this piano." Our Godmother broke into a bellylaugh and gave us her imitatation of decades of earnest young piano students perseverating on the first note ad naseum. Mar couldn't stop laughing at all those "typical" kids perseverating just like he used to.

Kristina, don't you love the language of Autism. "The Godmother of Music" is one of Mars' gems.

At age 13 we are entering the comedy state of Autism for sure. . .

@Linda,
Yes, I think we are on the way towards that! I guess we could note that said student would have the added benefit of getting in a workout!

@Barbara,
As it turned out, 'tragedy into comedy' was (I thought) a pervasive theme at the autism panel at BlogHer. Certainly there were some good laughs shared by all!

@Sarah,
Now I cannot get those opening bars to 'Für Elise' out of my head...... love the 'Godmother of Music'!

@Jill,
I've a few ideas about why the wriggling fingers and the laughter, not that I'm necessarily correct....

Know what you mean about hearing or reading about autism being a tragedy - reason why I enjoy watching my two soaps and working out at the gym - need my laughter and strength.

Laughter gives strength -- sometimes I think we all forget that.