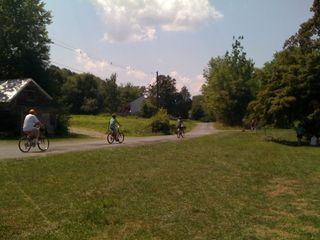 When Charlie was younger I was always very tempted to name this blog Travels With Charlie, pace John Steinbeck. If there was one thing we did with Charlie, it was to go places.

We went all around New Jersey and frequently to Philadelphia. We went to Washington, D.C., Boston, the Berkshires in Massachusetts, Saratoga, Vermont. We took the train, subway, and PATH train almost every weekend, often with Charlie and me 'solo-ing' it to meet Jim in his office: We took NJ Transit to the D train uptown all the way to the Bronx and then walked all the way up Fordham Road to see Jim when he worked at Fordham University's Rose Hill campus; we drove over the George Washington Bridge and up the Henry HudsonParkway and the Mosholu Parkway; we parked in Jersey City, walked down John F. Kennedy Boulevard to take the PATH to 33rd Street and then (when Jim moved to Fordham's Lincoln Center campus) either the D or the B up to Columbus Circle. Sometimes we walked the 30-something blocks, stopping in bodegas for a 'green drink' for Charlie and a 'brown drink' for me.

And once a year, we took an almost 7-hour non-stop airplane flight from the East Coast to the Bay Area and back, to see my family over the Christmas holidays in California.

Those were the days.

The long airplane ride has become simply impossible (though I do think Charlie could manage a one-hour ride, with massive preparations on our part and a heck of a lot of social stories). The train trips gave way to Charlie's heightened sensory system---New York, as I was reminded on Friday, is noisy, and the train, subway, and PATH and their respective stations a potential sensory hell (not just the creaks, squeaks, and gratings; it was quite cool over the weekend, but the Christopher Street PATH station's temperature rivaled that of the Inferno). The touring in the car dwindled as Charlie started to have neurological storms---some of a perilous kind in which we became too aware of how many hard surfaces there are in a car---and occasionally on the highway.

I write regularly of our walks and Charlie's and Jim's many bike rides. These are all around our neighborhood and while all the exercise has been key to Charlie's being so peaceful easy-feeling these past months, the fact that these are strictly 'local' and, indeed, on the exact same routes again and again, has not gone unnoticed by us. It is good to be out with Charlie, but being out in pretty much the same places again and again and only, is something of a metaphor for how life has changed for us and Charlie, now that he has gotten older and, specifically, entered adolescence and teenagerhood.

My friend Kyra asked me how and when we knew that Charlie had indeed crossed that never-going-back line into puberty. I had to pause and think as I have been so wrapped up in the day-to-day of keeping Charlie, and us, going. I noted some physical changes that had appeared as if overnight (body hair 'all over,' a ridiculously immense growth spurt, a need for a lot more sleep and major difficulties waking Charlie up in the morning). Most of all, I noted how there had been a distinct ratcheting up of the intensity of Charlie's 'extreme behaviors.' What had been a storm was now a hurricane, a tornado of Wizard of Oz-ish proportions.

So has traveling with Charlie took on a whole new, much more metaphorical sort of meaning, about making our way through each day and set of challenges and joys with Charlie.

Sunday we loaded the bikes onto the white car and went out to the bike path in central New Jersey where there's horses and farms. We had to double back home after twenty minutes when I remembered that we had not brought the bike helmets. Turning around once we're going in one direction has been known to irk Charlie; we explained (in minimal language) what was going on and Charlie was ok with it.

Once we were finally at the bike path, Charlie was ready to ride. He did a nice job, Jim reported, maneuvering among a lot of other cyclists and walkers and runners. We stopped for sodas and then, after consulting Google Maps, went south to a river town in search of a Mexican restaurant, with Charlie's fondness for burritos and guacamole in mind. The ride was very pleasant, the road lined with trees and farms and little wooden stands selling Jersey sweet corn and tomatoes and pies. Charlie looked out the windows with interest. We reached the little river town and I went in to pick up our order (mobile Internet and an iPhone do come in quite handy, and not only for directions).

I had gotten Charlie just the sort of burrito that he likes, with guacamole and neither cheese nor sour cream. He opened up the container, looked at it, and placed it on the seat beside him: He definitely likes to get the burritos from more-fast-food sort of places, where the food come wrapped in paper and the tortilla chips are less 'authentic.'  We turned around and drove home. Charlie gradually passed his uneaten burrito and the chips and salsa back to me and took in the passing scene. He alternated between quiet and over-the-top excited. As we neared home, we passed branch of the Mexican fast-food place that he likes but he didn't ask to go. 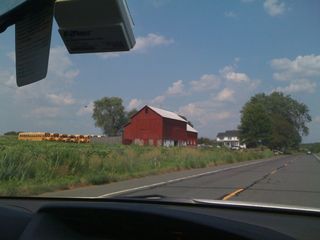 Once home, Charlie immediately went to his room---perhaps a little R & R after more of an adventure than we've tried of late? He didn't fall asleep and appeared back downstairs after a half-hour to use the computer and eat the two packs of sushi he found in the fridge. Jim rested up and, just as the sun was starting to set, we unloaded the bikes from the racks and off he and Charlie went.

Along with a morning bike ride on our home turf, they biked 30 miles in all; add the walk Charlie and I did following his first bike ride and a night walke with Jim and  it was a 37 mile day of action, of travels with Charlie.

Perhaps it'll be some while before we're able to venture out as far as we used to. Perrhaps we may not be able to venture too far, or at least beyond the borders of the Garden State. One thing's for sure: It's good to be back on the road with our boy, and that's the long and short of it.

Hoping the road rises to meet our friend Jennyalice and her family  as they start their cross-country trip! Have Autism Will Travel, indeed.

Love reading here, Kristina. I admit to being challenged for responding - which part do I choose? Love that Charlie loves Mexican food. Me, too.

Jim must be exhausted at the end of the day - 37 miles of bike rides! But it's easier to be peaceful-easy when you're too tired to move much more.

Please tell us what sort of sights got Charlie "very excited"! Was one of them the Big Red Barn in your photo? Is Charlies familiar with that book?

@Barbara,
He'd have Mexican everyday if he could..... I find myself agreeing with him!

@Louise,
Well, 7 of the miles were afoot. I think Jim kind of wanted to have a day in which they did 30 miles on the bikes. --- Am not so sure what Charlie particularly likes to look at out the window. I do think he likes the general experience of driving around, to a certain extent. My parents got him that Big Red Barn book years ago but I don't think he really warmed up to it (I think we still have the book actually).

We are working on getting a new bike trailer for Jack so we can all go riding again. Shawn loves to ride too, and it's a great activity for us in Tahoe when we're with my sister's family.
Jack has loved looking out the window of the RV while sitting at the dinette. SO much so that he actually poked a bit of the screen out..whoops.
Thanks for the well-wishes. So far, pretty good!

Looking forward to hearing more of your cross-country adventures!