No Need To Pass the Kleenex

Monday we (or at least two-thirds of our tight team o' three) were on the water: 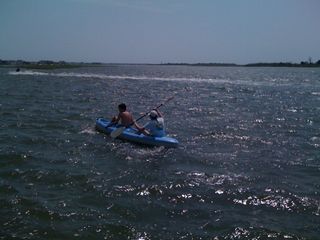 and in the water: 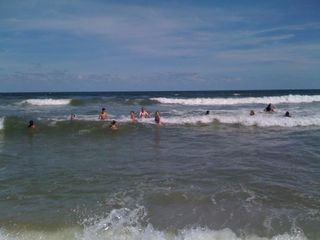 We are very lucky to have a friend down at the beach who is letting us leave our kayak in his yard. Our kayak is a bit on the bulky side and it's not so easy to haul it down and up the Garden State Parkway. There was a constant wind so the water was choppy and, Charlie still not being very handy with the paddle, Jim had to work hard to keep them moving (in the direction that Jim wanted to go, that is). Any way the water went, they had a tremendous time and since our friend lives right by the water, expect more reports of Jim and Charlie 'at sea.'

Afterwards (but of course!) we went swimming at the beach. The ocean was again just to Charlie's liking, with rough waves that pulled up in a big trough and then piled foam and water onto you. Charlie is tall and strong enough that he can stand up to a lot of the waves, or dive directly into them if he so chooses. He swam his way, headfirst, into three straight on (I jumped under).

Charlie's gotten, as you can see from the photos, leaner, rangier. At a neurologist's visit yesterday morning, the nurse observed this fact and then said---recalling our last conversation from our last appointment back in June---'all those 3-mile walks, right?' All those, I noted (Jim and Charlie were waiting in the big atrium of the building the doctor's office is in----not good for Charlie, or for anyone, to sit around in a small exam room while his parents and medical professionals talk about him). I also mentioned Jim's and Charlie's latest 20 and 30 miles/day of bike riding. The neurologist appeared and, after going over the test results from all the blood work Charlie had done back in July----everything is normal and Charlie doesn't have any genetic disorders that might account for some things, like his history of SIBs---he was very interested in hearing about Charlie and his bike-riding.

So after talking test results and a few plans for future attempts for procedures like drawing blood (the neurologist mentioned that his office---which has a behaviorist on staff---and some other agencies might start offering some training/programming to help autistic kids with things like getting their blood drawn), we talked bikes. About possibly biking with a bike club, bike trails, and more. I assured the doctor, at our next visit, Jim is going to have to talk to him, as he is Mr. Taught Charlie To Ride On Two Wheels and Not Only On Paths Parks and Parking Lots But Also On Local Streets in Traffic. With Cars.

I couldn't help interjecting once (or maybe twice or thrice) about how different everything was last summer. We went to see the neurologist (he is about an hour and 40 minutes away from where we live) a couple of times in the summer of 2009. Charlie got major upset in the car almost every ride, coming and going. He threw himself at the psychiatric nurse at one moment after which I found myself in a neighboring exam room with her shoving a box of Kleenex my way as we talked about everything (her late daughter was, as I've mentioned, developmentally disabled), and as Jim sat in a separate room with a weepy Charlie. On another visit, Charlie went completely to pieces in the parking lot.

No chance we would have made any post-neuro beach trips to kayak, swim, visit with friends (and they had a dog!---though Charlie was very wary of Buster until his owner put him on a leash).

I just want to say, with kids like Charlie, there's always another chance. 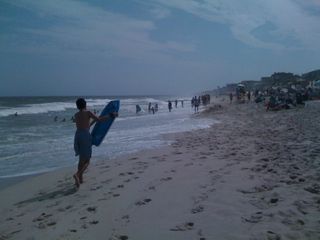 New word - rangier - I use lanky to describe Matt and Nick walking, not sure if correct term but they dip their shoulders and waddle when walking.

I wonder if there is such a thing as waking therapist?

Reg Ctr worker was here Friday and Matt will be getting a FBA and maybe ABA from Wellspring. Will work on behavior and toileting. Also when school starts will get the FBA from them - will be interesting to compare both - also I am using my digital tape recorder to make sure they are accurate in their assessments from what I say and talked to aide today about sticking only to relevant details when interviewed.

This yr I am requesting his aide be at the IEP, which is triennial and transition to high school.

A walking therapist? Charlie kind of puts his head down when he walks but he really strides. He and I did an early morning walk (he woke at 6am but we didn't need to leave till 8.15am for the neurologist and we were, for the first time ever, early). He has a much bigger stride than me and it's impossible for me to match his pace---my legs are just a lot shorter.

That sounds like a very good idea to have the aide at his IEP, especially as aides do so much of the 'nitty gritty.'

Would like to know more about the FBA. Hope that gets done in a timely fashion.

Help from the behaviorist for blood draws sounds like a great idea. More reason to hope.

Love to hear about the biking and, well, just everything. Glad to hear that Charlie is doing so well!