Charlie got home from his last day of Extended School Year in a cheery mood. While Jim said thanks to the bus driver and aide and wished them a good vacation, Charlie went to the white car, opened the door to the back seat, and took out his things, his worry beads and tschotskes, little sensory fidget item.

These all stay in the white car when Charlie goes to school. We've been taking out one strand of beads and leaving it in Charlie's teacher's mailbox, so she can give to him to take home on the bus. An attempt to place the worry beads in Charlie's bookbag as he got out of the white car didn't go over too well:  In his absence, the car is the keeper of the beads.

Wednesday afternoon, seeing the beads and other things on the floor and couch, Jim and I deduced that Charlie had brought everything in. But there he was beside the stairs, standing stiffly with his hands crooked behind his head.

I think you can imagine what happened next, but I'll tell you anyways.

Jim and I shook out blankets. We pressed ourselves flat on the floor and looked under couches. We ran out to the car and made our way through a couple of crumb layers; poked amid crumby coins; unearthed a pen, some fragments of fried potato items, grains of orangey rice, and a great deal of sand. (I know, sounds like someone needs to vacuum out their car.) We shook out the mats (which clearly needed it). We moved the front seats up and down, up and down. We knelt in the sandiness, opened the trunk and poked in the secret compartment.' We knelt on the grass which had, fortunately, just been mowed and was very dry due to the summer's heat, making it easy to look through the scraggly blades.

We ran back in the house and looked and then Jim got in the car and raced to the post office and library as he'd been there earlier in the day. I sat down and wrote to my friend Emma in Athens; she'd sent Charlie the beads, which are of a silvery metal with a nice weight and are super special because they're from her and Dimitri, and also because they're Olympiakos beads.(This site does have Olympiakos worry beads but they're not the same as the ones Charlie had been given.) I thought of writing to a former student who is Greek and visits Greece ever summer and (per his Facebook status) is there now. I started Googling 'worry beads Olympiakos' and 'Olympiakos komboloi' and got some good results, but none just like Charlie's and he is not one to accept substitutes.

Jim came back and started asking where we could buy some beads. While I speculated that some 'It's Greek to Me' sort of store might have them, I had a feeling that finding a pair exactly like the one Charlie had would be difficult. 'I'll drive anywhere!' said Jim. 'Somehow I don't think driving to Astoria on a wild goose chase for beads would be the best thing with Charlie not having the beads,' I said.

Charlie only had two words to say.

Jim went to get the bikes from the back shed. He recalled that the beads had been in the middle of the backseat so that, therefore, it was highly unlikely they could be readily swiped out. Plus, being metal, they would have made some sort of clanking sound if they fell out of the car.

Our car has a little tab with icon in the backseat that shows where you can pull out a velcro tab and strap down a carseat. I went back out (Charlie saying 'black beads, black beads, black beads') and pulled at the tabs and straps, all of which we've not bothered with as Charlie is, of course, far far past carseat, or booster seat, size. I noted that there is a small opening just behind where the seat belts are fastened by straps to the crease between the back part of the backseat and the sitting part. I peered in, didn't see anything.

A passage from Flannery O'Connor's Wise Blood, involving the theft of a baby mummy, flashed through my mind.

(A little weird, yes. Miss Flannery tends towards the weird and, in particular, the grotesque in her writing---she has a sharp eye for a certain kind of visual detail.)

I got out and pulled the seat backs down and up. Charlie was now standing by the car and it would be an understatement to say that his expression was serious. I went to the other side of the car and opened that back door and pulled at the straps and put my fingers into the gap. I bent over to look and only saw darkness. I put my hand into the space and lifted up some of the seat and was able to just see what's under the seat, and that there were more crevices and hollw spaces for something to have fallen into. I went back to the other side of the car and looked back down into the space.

Very faint glisten outline of something round.

And my hands being far smaller than Charlie's---his fingers are beautifully long and slender----I could shove my fingers into the space and voilà, black beads!

Only, erase that exclamation point. While we wanted to do a total victory dance on the front lawn (the neighbors already know we are the weird family), we mostly contained ourselves from such an egregious show of emotion (though I do think such was warranted given Charlie's history of getting alarmed and stormy when something he wants is missing and his insistence on having EXACTLY WHAT CANNOT BE FOUND and the fact that said object can't exactly be found at Target but in some little store in Athens).

Charlie, having held in his distress, started moaning and ran into the house. Once the black beads were placed in their rightful formation among the other beads and tschotskes, he ran down into the basement. Jim started putting on suntan lotion and I washed the containers from Charlie's lunchbox.

Charlie zoomed back up the stairs and then up to the second floor, showered, and returned back downstairs wearing his latest favorite green shirt and a pair of blue shorts (that are a certain hue of blue). He glanced once more over at the beads where he'd placed them by the blue couch and got his bike helmet and was smiling as he kicked up the kickstand and gripped the handlebars.

What we do for comfort, for peace of mind.

Good thing I read Wise Blood all those years ago. 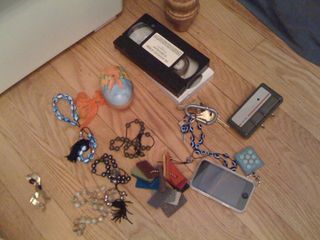 Oh Kristina! You had me tense with worry too!

So glad you found them. God bless Flannery O'Connor, and the TTo3 as well.

I'm going to have to read Flannery O'Connor now.

Happy for your family!

You never know when literature will save the day...

I'm also reflecting how crucial it was for Charlie to be able to tell you "black beads."

Well done, both of you. And Flannery too.

Now I have to read Wise Blood!

Being the work of Flannery, Wise Blood does have quite a bit of weirdness, including a gorilla......

Now I'm getting really tempted to make some reference to The Misfit somehow.

I can never resist alliteration!

When similar incidents have happened with Matt he has survived by seeing a pic of the item on the computer screen until I could produce it for him in person.

Great job in locating black beads. What is the Videotape of that is in the bottom pic?

I noticed the long list of blogs/websites but could not find mine?

I'm sitting on a balcony overlooking the sea with a foreign laptop and bad internet connection (just explaining my lack of internet presence of late).

I was worried for a while there! I will send you another set of those beads for spare/emergency before they go out of fashion.

Right now, unless Dimitri is actually in the sea, he is in need of the mp4 player, iPod and portable DVD player to be at hand (and preferably all on)all the time, thank goodness he hasn't spotted vthis laptop. Comforting things from home.

@Bonnie,
You're added, sorry about that!

I thought of showing Charlie a photo of the missing beads; couldn't find one. Now I do have the photo I took....

@Emma,
Thanks in advance, you don't have to! Didn't know there were fashions in worry beads.

Charlie is similar, liking to have all of his things with him at all times, unless they are in 'safe' places (by the couch at home, on his bed at night, in the white car).

Hope you are having a good time at the sesa.

thanks for the link - I meant BellaOnline as I hardly have time for the blog, but there is a link to it from there and maybe now I will start blogging more.

I just now tried to re-read A Good Man is Hard to Find and I made it as far as the description of the grandmother's outfit in the car. I could feel myself tensing in anticipation and getting faintly nauseated so I stopped. Since having children I just can't read stuff like that. (Mark me down for no Dexter either.)

It's a pity. I loved that story, but I haven't read it in 20 years. I think Everything That Rises Must Converge is too much for me too, nowadays. I just lack emotional fortitude.

Her details kind of drive me crazy. Maybe one reason I couldn't bear to teach Intro to English Lit one more time was that I couldn't get myself to read 'Good Country People' and 'The Life You Save May Be Your Own' one more time.

The one story that I tend to return is 'The River' (which is disturbing as all of her stuff).

regarding the videotape---it's a Teletubbies one (the black one). Charlie does not watch it as we don't have a VCR player anymore---he saw the video in a pile in the waiting room at the hospital (where he got his blood drawn) and the staff let him take it.