18 Miles On the Bikes At the Beach 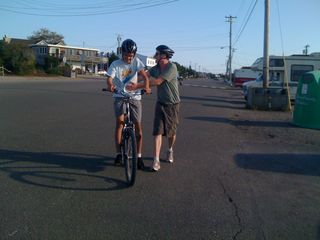 I can't remember the last time that we, who are very much a 'beachy' family, went to the beach.  (It was a couple of weeks ago at the end of August; good thing I write this blog so I can just look it up, right?)

We got so into traveling to trails and other places to ride bikes this past summer that we more often found ourselves choosing not to go to the beach. Plus the tendency for there to be lots of traffic (even on the back roads) to get 'down the Shore' in the summer curbed our enthusiasm. Charlie himself had seemed to get into a rut about our beach visits sometime during July so that, even though he always likes being at the beach, he almost seemed to treat going as something he had to do--- a 'job,' Jim remarked---and not to treat it with the vivid joy he so often has. Since we started to make those trips last winter (the off off-season for beachgoing), we've started to think of going to the beach as a year-round activity, rather than one strictly for summer. In many ways, the beach is at its nicest---no crowds, beautiful light, not scorching hot, water still warm---in September and October, as Jim, who was spending a sabbatical there 18 years ago, can attest.

Charlie said a hesitant 'yes' when Jim mentioned the ocean Sunday morning. They did a morning bike ride around the neighborhood, then we loaded up the car with beach bag and bikes and got to the ocean in something like an hour and ten minutes.

Hallelujah for the off-season, oh yes.

Charlie wasted no time getting his boogie board and running out to the beach. Jim and I stood on the sand and directed him with a few words and lot of hand signals and elaborate pointing to stay clear of the rock jetties, and he was very amenable. He got in at least one fairly long ride on his board and went under a couple of waves, and then was quite happy to run around on the sand in and out of the waves' edge (it was nearing high tide), somewhat like he used to when he was little and was simply entranced by the movement of the water and couldn't take his eyes off of it (or himself out of it).

After swimming, we got a late-ish sushi lunch and then.

Charlie and Jim biked from one end of the beach to the other.  That's around 18 miles.

The wind was somewhat at their backs and Jim moved them around here and there to better avoid any traffic. I drove up to our pre-determined meeting point and found a spot with a lovely view of the water, the sun coming in over people fishing and boats going back and forth. Jim texted me when, after 1 hour and 40 minutes---meaning they did something under a 5:30 minute mile the whole way---their arrival was imminent and reminded me that I had to make a really big deal of this Charlie-triumph. You can be sure there was clapping and cheering and, oh, maybe even a little victory dancing (by yours truly--I believe in showing my enthusiasm).

And for once, I think I caught Charlie's feelings about the great matter of his achievement on camera, above. 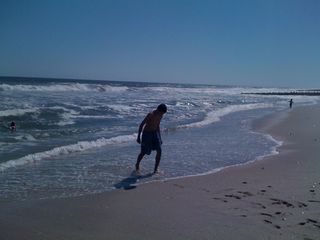