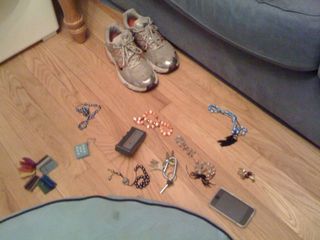 A few thoughts of mine on two new studies regarding the detection of autism in infants over at Care2.com ending with some musings about how, even though it was not exactly easy to learn that our toddler boy had a severe and significant neuro-developmental-psychiatric disability, it was a lot easier to help Charlie through neurological storminess when he was carry-able. Too, a younger Charlie did not stand out in public---and attract attention he does not like--- the way he does now.

Yet. Our now older, taller, well-muscled and athletic teenage guy seems to be figuring out how to detect storminess in himself as it's starting (rather than while in the throes of it) and to tell us what he needs to do.

This would be, to ride his bike.

Jim always has to accompany Charlie on these rides, of course. It is the case that Jim has been with Charlie (and a-bike himself) on 99.99999999999999999% of these rides, with the exception of my own highly unsuccessful attempt to ride with Charlie two summer ago, and a slightly more successful effort to run behind Charlie (he was only about 7 years old) while he pedaled ahead of me. Also, at one of his former elementary schools, Charlie used to ride a bike (someone had just left it at the school) in the parking lot and two of the (male) aides (whom Charlie adored---so of course, the next year these aides were transferred to another school site) took turns running after him.  Good times those were, very good.

Lately Charlie has been saying,

Charlie is (well, this is how I translate it) trying to express an idea that's complicated, a bit contradictory, complex: Dad is gone---therefore Charlie will not be going bike riding with Dad---that is (speculating here) disappointing, sad, puzzling---Dad will come back---and there will be bike riding and other sorts of fun such as orderly Mom doesn't provide (well, not in that exhilarating, aerobic way).

Wednesday I picked up Charlie after day #2 back to school (it was a good day, as Charlie's teacher---she came out to say hi---told me herself). Charlie said those above phrases when we got home and went up to his room to take a rest (napless, as it turned out). Jim came home, Charlie got up, they went for a bike ride, the first of what would be two.

I've been thinking a lot lately about how, as Charlie grows up, things get easier, and harder. About how, 'easy' and 'hard' aren't really the right words.

Yes, there are times I really miss scooping up my boy and carrying him (kicking and back-arching, but in my arms) to safety.

Yes, it feels pretty darn motherly good to hear Charlie call for his bike helmet and hasten out to the front yard so he can bike out his worries and anxieties.

He certainly doesn't put my shoes amid the pantheon of his favorite things (see photo above).

If that isn't a strong communication, what is?

After reading your post on Care2, a couple of thoughts. Isn't it standard for 'transition' procedures to start at age 14 in the IEP process? (Meaning planning for post-public school life) This year for Charlie? Does 'transition planning' count as 'services' that will promote Charlie having a job in future?

And then, coupling Charlie's bike riding with some future endeavor....with a several year plan could he work up to a form of delivery-boy job? Even now Jim could teach him that things can be transported on his bike, no?

I once viewed a video of an adult using a power chair who sold snacks within a small commercial area. This person had very limited motor ability and customers were on the honor system to pay but the he could see and interact with the customers. Certainly the whole situation was prepped by supportive caregivers, but the 'job' was real.

Just a few of my thoughts.

I don't know whether it's easier or harder...it's just different. I keep telling myself that at least I'm getting some sleep now, and everyone is toilet trained, so theoretically it should be 'easier'. I think that I'll settle for
different :-) If nothing else, no one is ever, ever bored.

I think that it's great that supposedly they're starting to detect 'autism' earlier, but I'm all for teen and adult supports now. It seems that for too long money and energy have been poured into 'early intervention', with no regard at all to later challenges and situations.

@Barbara,
Yes, that process of transition does start this year (gulp)---I do think Charlie will have the skills for some job. The bigger issue will be whether there will be any jobs for him.

We've been talking about a delivery/messenger/courier type job. I guess most people would hesitate at the combination of autistic bike rider + traffic --- but I have a feeling there will be more New York bike rides in traffic coming up --- do you have a link or source for that video?

Maybe delivering things like lunch or flowers or packages.....

@Jen,
We are definitely never ever bored here, for sure! Having the toilet training business pretty much 'under control' does make a big difference--- the thing that is so much harder is (and I hate to keep bringing it up, but it's real) the size issue. A smaller child is easier (certainly for me being 5 feet tall). But then Charlie understands so much more now and can manage himself better.

If Charlie was delivering anything (messages, lunches, flowers), he would have to be able to communicate with the people to whom he's bringing things. Delivering anything to shut-ins, especially, would require him to be prepared to have to engage in conversations about grandchildren!

I've just spent half the past week in the hospital, and one job I learned about that Charlie would be good at is that of hospital trolley-roller, or "escort," as they are termed. This essentially involves pushing patients around all day, from rooms to tests like MRIs,cardio echoes, etc. Usually, there are no conversations involved - just matching patients' wristbands to delivery lists.

In a large hospital, layouts can get quite complex. Charlie, with his great spatial and navigation senses, his physical strength and agility, as well as his need for movement, might get a real pleasure out of doing something like "escorting" stretchers.

If the BAC has vo-tech planning or outreach, perhaps you could follow up with them. Charlie may be fearful of hospitals or doctors *now,* but with sufficient time for re-training, he could grow out of it. Isn't that your hope with his fear of dogs?

Now that is some great communication! LOVE the relationship he and his Dad have.

Sweet boy. He does love his dad. And his dad loves him back. (And his mom, of course, but we knew that, already).

I think you have reason to hope, Kristina, that in 7 years there will be an intersection of his skills/abilities and a job. If things do not change much in the jobs that are currently available...it seems some caregivers/parents help create jobs for their adult children. Not what one would hope for, but not a terrible back-up on the whole - do you think?

Sorry. It's not that I am so old I have forgotten, but that I do remember that video was from my time in Oregon or more than 16 years ago. While it seems like every possible thing has been uploaded to Utoob, apparently not. ;)

I like that idea very much, Barbara---caregivers/parents helping to create jobs for their children. Perhaps it is analogous to parents creating schools and programs---no problem about the video. Sort of glad to know that Utoob (U2b) doesn't really have 'everything.'

@Emily and Brenda,
I remain 'just mom,' like the wallpaper until needed (for food, finding the video, folding the blanket just so).

I think there's definitely an evolution in Charlie's and Jim's relationship as Charlie has gotten older. Sometimes it's just better for guys to hang with guys.......

If you read page 11-12 here
http://www.angelmanuk.org/newsletters/ISSUE35.pdf there is an example of parents helping with finding work (a business actually) for there son. Yet again it's about "microboards", this is called a "micro-enterprise".

I don't know if it's possible to get in touch with the parents to find out a bit more, they are in Maryland so it is workable to the US I think?

Great communication about dad and the bike!

Thanks so much Emma! I remember you wrote about microboards earlier---in the UK/Canada, too (I think?).

@Louise,
Hope you are feeling much better---

Charlie will need to have a job coach for any job, and things will be, or should be, set up to accommodate his needs. Since he really can't read, someone else would have to help him with anything that involved that.

Some kids like Charlie have jobs in hospitals doing things like folding towels. I did think of Charlie doing something like pushing a gurney (he, and we, have been in hospitals and nursing homes quite a bit over the past few years, due to Jim's mother's illnesses). But I think that would depend on how he'd be able to handle the sensory environment in a hospital and that could be rather overwhelming.

Charlie has been doing so much better with dogs, a long way from just a few months ago. He's ok with doctors and the hospital.