Home Archives Profile Subscribe
Working the Transition: Prepping Back to School with Bikes & iPad
The End of the Trail 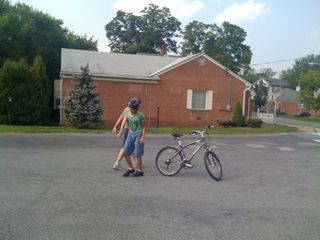 Not that you needed to know this, but this working the transition business can be taxing in all domains.

In previous years, the transition back to school after the longer summer vacation has often been a time of 'outbursts,' 'explosions,' 'incidents' in our household. The last week preceding the return to school has, in particular, been fraught with lots of 'interesting moments,' along with boredom (as we and Charlie realize we've exhausted our never-large-enough catalogue of things to do when summer school is over and we've all swum and sunned ourselves out) and a burgeoning sense of weary relief that, at long last!, it's back to school. This summer having been, quite to everyone's surprise, quite a bit of fun, there's been a lot less of the boredom to go around. While it does feel like it's time for Charlie to return to the classroom, we've all felt a lot less like we're gasping to the finish line, i.e., the magic first day of school.

I knew that Charlie had the whole 'back to school' business very much on his mind after we'd reviewed the social story on the iPad Thursday and then driven around his school. He was practically warbling with joy in the back seat of the white car en route to the Jersey horse country bike trail Thursday, as if he were so glad that things were as they have been so often this summer, with Jim and me in the front seat and Charlie in the back and the bikes strapped tightly onto the bike rack.

Thursday night, Charlie---after a night walk with Jim---went to bed and then didn't go to sleep till after midnight.

We heard him jabbering away at 3am.

And, at 6am when I got up to go to catch the train for work.

Jim told me that Charlie got up and got dressed almost as soon as I was out the door. He dozed off some while Jim got up and put the bikes on the car. They drove back out to Jersey horse country and Charlie was ready to ride.  He was clearly tired, having had barely any sleep, but still did the 'basic' course of 12 miles. They got lunch on the way back and, while Charlie went straight to bed on coming home, he didn't fall asleep until around 4pm. He woke up just before 7pm.

We both agreed, he was very likely tossing and turning (and chattering) in anticipation of the Big Day Next Tuesday. Charlie has slipped into a summer sleeping sort of schedule, waking around 7.30 or 8am or even later (9am, folks, somedays). Friday was the first day he got out of bed earlier: After driving by the Big Autism Center Thursday, and seeing the 'Back to School' social story, perhaps he thought, automatically, 'time for school'?

The nap was much-needed and Charlie took his time (double triple boldface underline) getting up. And then, after a snack (and after watching me cut up a big ol' watermelon), he went back to bed and was soon out.

Yes, after a lot of heavy-duty physical activity in the late summer heat (with an extra wallop of humidity thanks in part to Hurricane Earl), a boy needs to rest.

I think we've allotted enough time for the 'Back to School' transition. But it is true, the change (however much one really does like school) can still feel like a bucket of water (you pick the temperature) has been thrown on you when you start.

We'll see what ensues (or rather, what does not) over the next three days.