History in the Biking 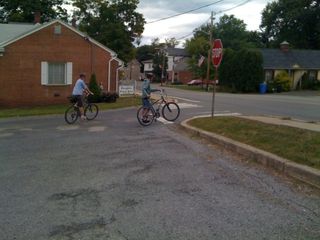 We got gas and went to the bank before getting an early lunch Thursday morning, and then Charlie---off from school for Rosh Hashanah (he'd indicated his awareness of this Wednesday night when he stayed up extra late; he wasn't perturbed when I wrote 'home for a holiday today' on his iPad using DoodleBuddy; I think Charlie is already associating his iPad with schedules and such and he looked very intently at the purply words I wrote and speedily, digitally, erased)---Charlie paced and hung out in our front yard until, bikes loaded on the rack, we drove to the train station to get Jim, who, on the ride out to their favorite bike path in Jersey horse country, regaled us not with tales of fashionistas on the prowl (Jim teaches near Lincoln Center, which is where Fashion Week is taking place as I type this and you read it) but with why Walker Percy's family brought Chinese post-the-Transcontinental-Railroad workers and then Italians to Mississippi.

On the bike trail, the wind came and went and you could sense that autumn-coming-and-then-winter chill already in the air---lovely bike riding conditions, and Jim and Charlie did 24 miles.

I have a feeling they'll be breaking that and, before too long, that will seem like ye average bike ride rather than the historical event 23 miles so recently did. 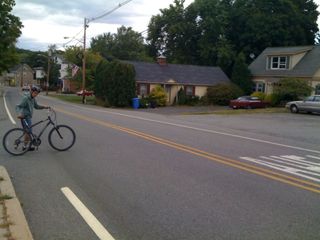 This post is much shorter than average for me as I've got to put the finishing touches on an essay I'm calling 'Autism and the Task of the Translator' for the upcoming Critical Autism Studies Workshop in Ottawa.

I will note that all these long and longer bike rides have been translating into one peaceful easy-feeling boy. 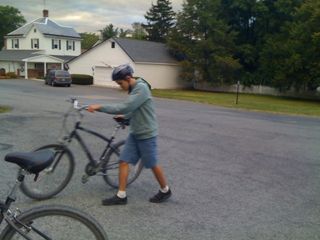