More Choices: When Beads Are Lost and Not Found 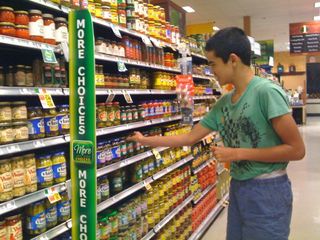 It was only after I uploaded today's 'daily (Charlie) photo' into my blogging platform that I saw, just to his left, the words on the advertisement:

Something that Charlie could always use a few more of, whether in regard to expanding the foods he'll eat or the direction he'll ride his bike, or in terms of what opportunities he might have (or rather not have) for a job, for a place to live, for ways to spend his free time.

Left to his own devices, Charlie tends, time and time again, to limit himself to fewer and fewer options. As the photo reveals, he is yet again wearing the same green shirt and pair of blue shorts that he keeps reaching for from his shelves. He actually wore a completely different set of clothes (orange shirt, for one thing) to school but changed as the day wore on. I think that is a quite acceptable compromise, wearing different clothes to school and for most of the time, and then putting on something familiar and comforting as the day wears on. Who doesn't reach for that favorite cardigan when you just need a little security? (I have had several such favorite cardigans, as I've worn and over-worn them so much that the elbows wear away and then, gradually, the entire sweater.)

Tuesday had its little stresses.

I was just unloading my books and things from the white car when Charlie's bus pulled up. He hopped out, white worry beads twisted in his fingers, and the bus driver and aide told me he'd done fine. I brought in Charlie's book bag and returned to find him standing beside the open left-side back door of our car. He turned to look at me and said,

With just a hint of strain in his voice that told me, he couldn't find them amid the other strands of beads and tsotchkes he likes to bring in the car.

So you can imagine how I spent the next hour wielding a flashlight to peer into the dark, crumby netherworld behind and below the back carseat, and shoving my hands therein, to find those purple beads.

They're actually a deep-hued brown. And they are not like the other strands of worry beads that Charlie has as these beads are the ones that Charlie once, for some reason we cannot divine, asked Jim to cut the string of. This was over a year ago and the result was bad chaos, beads all over the place and Charlie immediately wanting Jim to restring the beads, to re-fix what had been un-done. I probably should have just cast the beads that turned up beneath the couch into the dustbin, but my sentiments (those beads had been bought on my first trip to Greece, ah yes) got the better of me and I strung two of the beads on a golden ribbon for Charlie. The bright ribbon made it easy to keep track of them, and Charlie didn't seem to mind that this one strand of worry beads was so much smaller.

That very smallness created one problem: It has been much harder to keep track of a mini-strand of beads. There's been a couple of times that the purple beads were lost, but we have somehow (keeping very calm, at least in our demeanor) found them, and catastrophe averted.

But one's luck can run out.

It did yesterday afternoon.

Or mayhap just my luck with those beads. In the course of flashlight-flashing and poking into the crawl-space under the backseat, I did locate one strand of Evil Eye worry beads that had mysteriously disappeared over a year ago. The string was dusty and gray and the silver charm a pale pink, but Charlie took it right from me, and resumed his worried vigil on the lawn.

He did leave off from this as time passed and no purple beads was found, despite his repeated utterance of 'purple beads.' Jim came home from the train and he and I, recognizing how loaded it can be for Charlie to lose something like the beads, didn't talk about 'losing' anything, or 'not being able to find' them. I did say, at one point, that the beads had to be in the white car, just out of reach. Charlie looks to us to see how we are reacting, and to gauge his own reactions by so, however panicky we felt about not being able to find those purple beads, we strove not at all to show it.

And through a bike ride, some hanging around the house with Jim while I attended Back to School night, and a little late evening run to the grocery store, Charlie (who had not wanted to do #3 in that list, but assented as I said it was getting late and we, his parents, were getting rather worn) kept his cool. I am a bit more than sure that he'll be at least asking for the beads tomorrow---thinking of making a social story on his iPad about 'purple beads lost' or some such. It's not 'out of sight, out of mind,' for Charlie.

But knowing that he can manage, can live, fine without those two beads on a ribbon: Doing so calls on Charlie to be a little more flexible. In the grand scheme of things, I am hopeful that this ups his choices, and his chances for making his way in a world that just won't stop changing, and hiding worry beads that one then has to worry over.

My stomach sank when I read the subject. I hope the lag isn't bad on this one.

Ironic that "worry beads" can cause so much worry!

Mother of the year in so many ways. Can you feel the positive vibes from your readers? If only our energy could help find the beads.

Beads for Charlie and pictures for my son, things to always be aware of location. We need some sort of RFID tags to put on our children's things so we can always find them.

I think you have reason to hope.

I was reading these comments yesterday morning as Charlie was sitting on his bed making it very clear he would NOT budge until the needs were found. I felt there had to be a way......and I'm grateful I took so many photos of the beads. ---- yes, some way to keep track of it all (and so often with Charlie it is small things) would potentially be a lifesaver.