Next Thing You Know We'll Be Going to the Mall 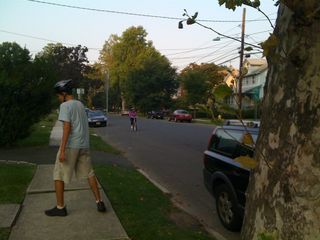 So as you may not remember, and as it's a bit hard for us not to remember while cringing, we spent a good part of the day after last Christmas (of Boxing Day, that is) in the ER after Charlie, whom we'd taken to the pediatrician's office due to an infected sore in his mouth, broke one of the front windows (it's an old Victorian sort of house) with the back of his head.

While we have since been back for doctor's appointments with Charlie (the nurse practitioner there has long done his check-ups), we have avoided the front waiting room and we have only gone when both Jim and I could be present.

I mean, why play with fire.

I have, then, apparently been in a quite adventurous frame of mind as, not only did Charlie and I go on Tuesday to the little local grocery store where certain red brownie boxes have haunted us, but yesterday we also ventured back into the pediatrician's office.

I've been filling out a mini-mound of medical forms, permission slips, etc., etc., which came home in Charlie's binder on the next to last day of summer school. Mid-form I realized that I (forehead smack) had forgotten to pick up the immunization record I'd requested from the pediatrician's office back in June. I suspected I could probably submit the information form to the school office and tell them I'd get the date of Charlie's last tetanus shot very soon, but then I remembered I have to ask the doctor's office to fill out a fairly long medical form filled out to clear that Charlie is in good cardiovascular health for some parts of his Adapted Physical Education program.

It was Jim's first teaching day yesterday so Charlie and I had big block of time to Do Things In, to Kill, or to Actually Accomplish Something. I found out that Charlie's immunization record form was still at the doctor's office's front desk and said to myself, we'd better go get it.

I felt like I could hear a drumroll of expectation: Can they do it? will another window go? good thing we're so familiar with the hospital now as it's where Charlie had his dental surgery in July.... I hurried to speak to the receptionist. She gave me the form and I showed her the other forms and we made arrangements for getting those filled out.

Charlie stood very straight and tall, looking at me via the corner of his eyes. He took a few steps backwards so he was near the window seat whose window he had, um, made contact with. I heard him make some kind of vocalization---to mark that here was the place?---and then he stood silently and then walked about 6 feet to the right very fast while vocalizing more, stoking various reactions from the two pre-adolescent girls and the young father with the baby in the baby carrier who were seated nearby. Then Charlie stood quietly while I finished speaking to the receptionist, walked to the waiting room door, and opened it. Charlie stepped through and just as the door was closing I said,

'You did a really great job.'

Charlie scooted out fast and (I would say) ebullient to the car and, after dropping off the forms at his school (he didn't want to go in), we made a celebratory trip to the Golden Arches where there was a ridiculously long line of cars in the drive-thru.

It was something we knew we could handle.

And just kidding about going to the mall. Not just because the place gives Charlie sensory overload times a gazillion.

There's just so so many other places we need to be exploring.

So proud of Charlie! He's facing his fears, developing flexibility about situations, and learning the change and growth is possible and happy. What a great example for all of us.

What demands his Adapted Physical Education program will place on him can never equal his bike-riding regimen. "Cardiovascuklar health"? He could run across the country! Will he have access to any cross-country running programs? Those would be perfect for him, IMHO.

I've been thinking it would be good to get Charlie started with cross-country running. I'd like to get him into that especially as, at some point, it will be too icy and snowy to ride a bike!

I don't know about any museum, especially one with art for Charlie at this point. He's really into this 'active boy' thing! But will keep it in mind, thank you!

I think his school needs the cardiovascular exam more for some of the other students, some of whom have multiple disabilities, cerebral palsy, other health issues that might merit using an exercise machine or running laps a big concern. The school also wants a complete health clearance before any of the kids go swimming and I think is wise. No margin for error, you might say, at the school.