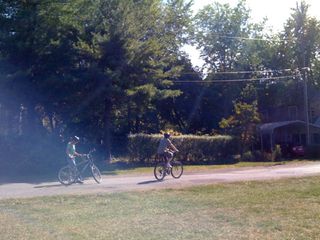 Before heading out to the New Jersey horse country bike path, we stopped to at a gas station to put air in in the bikes's tires. As Jim did this, I was idly looking around and noted the license plate on a woman's car:

As in, 'cure freak'---someone who is a freak about a cure for some disease?

I didn't see any ribbon magnets or stickers indicating that the woman in the car had some particular kind of curing in mind. The license plate reminded me of a topic that I've thought a lot about, and once posted regularly about on Autism Vox, the whole issue about 'should we cure autism,' of 'acceptance vs. cure.'

I still think that talking about 'curing' autism is at least a bit misguided. Autism isn't like cancer. Charlie was born as he is, with certain neurological and other challenges/impairments/deficits that we've done our best to help him address through years. He wasn't even 2 years old when he started therapies and an educational program---Charlie's been in a school sort of setting for the vast majority of his life. I understand people's hesitations about giving children psychotropic and other sorts of medications, but they can help (all while monitoring a child's health and responses very carefully, and with regular consultations with a doctor). And it feels a bit like a no-brainer now, but daily aerobic exercise seems to really help Charlie stay in that peaceful-easy-feeling way, with 'behaviors managed' and calm and carrying on being the routine rather than the exception.

Since Charlie was younger and we tried some biomedical sorts of 'treatments,' there've been more than a few books on curing and preventing autism published. I read one this past summer and, if I can get some projects done up to a point, I'll be writing about it at Care2.com.

'Prevention' is something Jim and I have been talking about more and more, but in a very different sense. Acceptance of Charlie and his challenges, and his unique ways of being, became part of our everyday a long time ago. Too, for us, the more we've let go and let be, the more peaceful-easy feelingness we seem to have in our household.

It's not that we've 'given in,' or that we 'give in,' to 'whatever Charlie wants and just don't do anything.'

It's rather that, we've let go of constantly urging and wheedling and coaxing Charlie to do things, recognizing that all that chitchat often just wears on him. More and more, Charlie does know exactly what he's supposed to do (get out of bed to get to school, move out of the way so others can past).  These days, he usually does it, but he does seem to need time to 'process,' but which I mean to work through things in his mind and send out whatever message needs to be to his body. When there are new or unusual or disruptive circumstances (such as transitions), we've been trying to find as many non-verbal (visual, gestural) ways to explain what's going on to Charlie. Too many words seem to muck things up for him---Jim and I are both highly verbal people, so we've had to adapt our loquacious selves to Charlie's ways. (Though, actually, I was, once a time, super shy and quiet; Jim, not so much.)

Through all the years that Charlie did ABA therapy sessions at home, we kept 'ABC' data about the antecedent to a 'behavior,' the actual 'behavior' itself, and the 'consequence' (i.e., whatever occurred after the 'behavior'). Keeping track of all this gave us a fairly good, if sometimes confusing, picture of what might be behind Charlie banging his head or whatever. In the past year, we started too realize that certain over-used phrases ('quiet hands' and other infamous bits of special ed speak; routine requests like 'do you need the bathroom') seemed to irk Charlie (who was sick of being talked down to, I would think). We found other, mostly non- or minimally verbal ways to communicate these things to Charlie (who is now quite able to handle the bathroom business on his own now, thank you).

All this has indeed seemed to create an environment in which Charlie doesn't feel like he is constantly being bugged or reprimanded to do this or that (who likes that?). I think he senses, too, that we have faith in him to do what he needs to do, and respect that sometimes it just takes him more time.

All the bike rides and walks have also been key in lessening behavior storminess. Those storms are very physically involving for Charlie. Long bike rides, ocean swimming, and the like have been far better ways for him to use his energy. And, I am inclined to think that he feels far better after accomplishing some physical feat, rather than ashamed after some difficult moments.

Saturday was a sort of 3 + 3 + 3 day. We all slept in (it was a busy week for all of us). Charlie and Jim went on a 10-mile morning bike ride, a fast 10- miler on the bike path, and another 12 on their home route, with Charlie throwing in a few extra miles by taking them down some streets they've not traveled on. Charlie was edgy en route to the bike path for ride #2, and at the start of ride #3, but did good staying calm (more or less) until he could bike it out.

I think he is learning, he can prevent blow-ups; can stop the storm while it is brewing, before it becomes tornadoish. Good for us all to learn to keep it peaceful-easy.

Guess that means we are become something of peace-freaks----much better, I would say, than the alternative.

Could the license plate be interpreted as "Cure for K?" As in "Cure for Katherine's breast cancer?"
You may be right about it referring to autism, but I've found that people have a tendency to personalize the world. It's somewhat the same phenomenon as buying a new car and suddenly noticing all the cars on the road that are the same model as yours.

I've never understood the frenzy people get into with "curing" autism. You can't cure how someone's brain is wired, they're not sick.

Ugh. Just the word cure and autism together irks me.

Jenny McCarthy MORE than irks me, but I won't even go all the way there.

IMO there's a huge difference btwn brain transplants that the ND claim people want as a cure, and independance.

I have never, ever, ever wanted to 'cure' my eldest. Who now at mild NLD (11) from non-verbal Mild PDD at 2.5yrs will be independant.

I do want the same for my youngest. It is NOT OK for him to be dependant for the rest of his life on others. I'm tired of the "just think of the good stuff"... And I roll my eyes. See, we live with it and not for it... we do the good stuff. We're planning a holiday to Great Wolf Lodge and it's waterpark at the beginning of Aug, to the local fall fair at Thxgiving (and he's talking about it already). We don't stew, we don't panic, we don't do a million different diets or therapies. We just keep going and living.

BUT, in the end I feel guilty. Here I am introducing him to the world out there and knowing that one day he'll be locked up.... It has to happen... I cannot care for him forever. Once day like it or not I will die...

It's not "OK" that he probably will never have friends, a family of his own, sex for that matter...

A cure for autism is needed. Not a brain transplant or a personality make over. But a means of allowing for independance. This is necessary.

@Jill,
Yup, that's what I thought the license plate was about. Found it stoke my thinking.

@farmwifetwo,
'Cure' in reference to autism is definitely interesting to think of philosophically and speculatively.

@Talon,
Not gonna get started about Ms McCarthy, ha!

As you know, Kristina, as per an Anon commented at another blog, you and I are both "freaks" of a different sort, along with kwombles. Not news to me personally, of course, and neither is the persistent misconstruction of certain things that I write clearly and carefully to avoid just such a situation.

I really like it that Charlie is figuring out what he needs and is able to get it. I remember when Jack was three, we thought that he just needed more physical exercise so he could actually sleep. And we never could get enough. It's a mystery trying to figure out if it's more x and less y or more y, a little x ... Hoping one day we'll stumble on a good formula that will keep us peaceful, too.

@Brenda,
Hope you will find that formula, too---we truly have just stumbled upon the current one. When Charlie was younger, I would have loved for him to have gotten more physical exercise, but it was much harder when he was younger to get him to do such things. I guess he's figured out that he likes it now!

@Emily,
I read that 'Anon' comment and thought of the license plate I had seen---some will just proceed with their view of the world, no matter what one says.

All well said, Kristina, per your usual. You know I like exercise (called 'heavy work' by some). Believing with you that exercise is beneficial for all sorts of reasons.

And funny (in a lovely kind of way) how that 'heavy work' has made things much easier--lighter--around here.

Would you be open to reading a book that has changed my way of thinking completely about autism vis-à-vis cure? I have a 26-year-old daughter who was diagnosed with autism many years ago. However, if she were to be assessed today, it would be very difficult to give her that label!! Check out this book: the UltraMind Solution by Mark Hyman, M.D. If you want to know about the changes we've seen in our daughter, Laura, please feel comfortable contacting me directly at stronghealthycommunity@sympatico.ca
I hope to hear from some of you!!

Very interesting---hope your daughter is doing really well, too. Thanks for the suggestion!