Rhetorical Questions, from Cicero to Charlie

The Twelve Tables, the Roman forum, and the finer points of litigation in ancient Rome are calling me tonight, plus I've got to write some sentences for a quiz on the Ablative Absolute and Indirect Statement for a Latin class.

I don't think think I'm wrong to think that you might prefer to read yet another vaccine post over at Care2.com than my musings on the peregrine praetor and the formulary system---guess when I asked if this would be my last vaccine post ever, my question was a bit of a rhetorical one.

Which is entirely appropriate given what I'm immersing myself in for the next couple of hours. The late Roman Republican orator Cicero being quite a master of the rhetorical question, of the question designed in such a way that it's not actually asking for the information one usually seeks in asking a question, but has some other purpose.

Which makes me think, 'what do you want?' has evolved into just such a thing in our household. (Is it possible for me to resist writing about Charlie's day no matter what legal Latin class prep lurks ahead, or what the topic I'm writing about?) There are some set words and phrases that Charlie says in answer to 'what do you want' but they've become a bit outdated, as if he says some responses on autopilot and then truly wants something else, but he can't recall the word, or doesn't know the word, or doesn't know how to pronounce it so we understand it, or doesn't even know what he wants, just that he'd like something, something, somewhat thing.

I've been devising some ways to use the iPad to help with this dilemma of helping Charlie answer questions that are no longer really questions. No time to go into that tonight and actually the clock is ticking near and near to mediam noctem and now that I've just managed to talk Charlie, using fewer than ten words, into going to bed (he had designs on a walk; a full day of school, two bike rides, some moments of distress involving crying---talk about a 'behavior' that is a 'no biggie' in this household, can we handle crying?)---back to the actiones legis for me.

Or do you think this boy might have a better idea for how to spend his time? 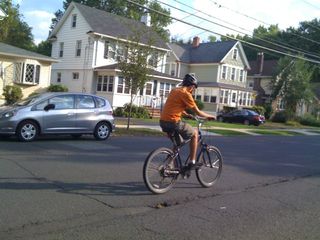 I don't know how much fun the Twelves Tables and the Roman Forum are, but this is a fun post :)

I hope to hear how Charlie is getting along with the iPad. Dimitri is still using the iPod which is encouraging (we've gone past the novelty stage).

I would be interested in Charlie's participation in cooking - just got a whiff of that over at emma's.

(I've got several cooking posts linked and grouped in a box in my middle column.)

My hubby was a Greek and Latin major in college and I took four years of Latin in high school, plus a legal latin class in law school that was actually (dare I say it?) sort of fun in a relative sense.
THe school that my kids attended, the youngest K through 12th grade, made Latin mandatory and there were all sorts of Latin skits and silly celebrations with costumes.
As for "what do you want?" it's can be a difficult question for anyone to answer at times. I hope Charlie takes to his iPad and discovers that it makes articulating his wants and needs easier.

Tahnk you for this food for thought. Mars is also stumped by questions. Maybe for him they are kind of rehtorical in reverse: Asking for information his mind does not usually seek.

Middle School,so full of bombarding questions, is no picnic for him. So I'm once again homeschooling while searching for a better way.

Should I have written yet another vaccine post? J

@Sarah,
I really like how you put that about Mars 'asking for information his mind does not usually seek.' I think Charlie has a sort of similar issue with questions; sometimes I think he asks them because he thinks he is supposed to, and then does not know what to do with the responses.

Middle School was extremely tough for Charlie, too---hence his being now in a separate center for autistic children and much happier.

@Jill,
I think I know the school you are talking about with all that Latin---I am feeling much better about going on and on about the urban praetor, the formulary system, the ius civile and the ius gentium and all of it knowing you found that class 'sort of' fun! I actually really enjoy teaching it. And real glad to hear about your husband and your studies in Latin and Greek!

@Emma,
Would love to know more about how Dimitri is doing with the iPod too. The iPad is simply _bigger_ and that makes a real difference for Charlie, I think---much easier to look at what is on the screen and to touch things.

@Barbara,
I used to cook a lot more; stopped when we lived with more in-laws; overly busy these days and when I have cooked, Charlie has not seemed interested in the results. But those red onions Dimitri was peeling are giving me some ideas......