Home Archives Profile Subscribe
Always With You (in traffic; with iPad)
When the iPad Flies (and I mean that literally) 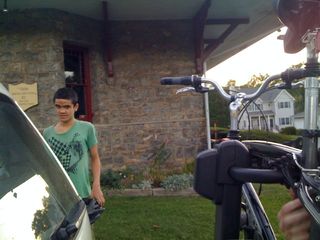 It was towards the end of my Intermediate Latin class in the early afternoon on Friday and, with 15 minutes to go, I was going over the comparative and superlative of adjectives and adverbs---how one says 'longer/more long' and 'longest/most long' in Latin (longior, longius and longissimus, longissima, longissimum, if you'd like a little Latin review). We'd gone over the quiz on participles, infinitives, ablative absolutes, and indirect statement on Friday (this had evoked responses of 'oh, yeah' and 'now I see it' and some other frustrated mumblings), segued into discussing the cost of college and my college's projected future plans, briefly looked at the present subjunctive of verbs, and then returned to the comparative and superlative which is, as grammatical constructs go, fairly easy.

I was explaining how to say that one is 'as [insert adjective] as possible' and wrote on the dry erase board:

which means, as I translated, 'as tired as possible.'

'Yes, that's me,' said one student. 'That exactly describes where I am right now,' said another student. 'I'm going to use that one.....'

'Yes, you should be tired,' I agreed (not feeling fresh as the proverbial daisy myself as Intermediate Latin is class #4 out of 5 of my Friday teaching schedule).

And I thought about the voice mail I noticed I'd gotten from the behaviorist at the Big Autism Center in the midst of talking about Roman court procedures. She hadn't left details, but I had an idea based on, among other 'incidents,' yesterday's.

Plus, some lag in Charlie now that he's back in school and back on the schoolbus to come home is inevitable. And, potential stomach unrest. And, knowing that my mom and dad are coming to visit next week (!) and I'm going away for two days to Ottawa for the Critical Autism Studies workshop. And, a bike ride being cut short after just a few miles Thursday due to a sudden onslaught of water pouring down from the sky on Charlie and Jim, after which Charlie, having had a nice warm shower, conked out for 3 hours around 8pm. He was able to go back to sleep but after 1.30am, while looking at photos on the iPad in his room. He'd gotten up at 7.30am with Jim who engineered a Clever Shortcut so they skipped all the nerve-wracking traffic and got easily to school. Then Charlie got upset in the morning, enough so that the behaviorist called.

I called her back and left a voice mail and texted Jim to call, too. He didn't speak to her till later in the day so I don't think it was World's Direst Incident. (We're not unfamiliar with those, as you know.) The staff have been using 'no' when Charlie does something he oughtn't; 'no' is a word fraught with many resonances for Charlie and, perhaps because of his disrupted sleep the night before and, too, the aborted bike ride, his tolerance level for anxiety and stress was low (and he was probably at least a bit fuzzy-head).

Charlie's teacher wrote that he was happy the rest of the day. He rode the bus home and almost immediately he and Jim were back on the road with the bikes loaded onto the car rack. They stopped at the Golden Arches (growing boy gotta refuel) and thence on to the highway where they sat in late afternoon Friday traffic for way too much time. Then they made it to the start of the bike path in New Jersey horse country that feels so like home after the summer's many rides and off they were on their bikes.

I took the train to the very last stop and made my way up a hill to where Jim had told me the car was parked. I drove a couple miles and, before too long, met an exuberant Jim and Charlie. What can beat dad-'n'-son exercising on a cool afternoon in a lovely, memory-rich spot?

(And what if Charlie might have the opportunity to get in some more fulsome exercise during his school day besides walks around the building and Adapted Physical Education? Must work on this--mens sana in corpore sano, you know.)

Too, this having been Charlie's first full week back at school, it only seems right that he, like my Latin students, was quam fessissimus. Which one might also translate, albeit loosely, as TGIF after a longior schoolweek that, sometime mid-Friday morning, was feeling more like longissimus.

In any event, I can assuredly say, our boy (who called again for his helmet and bike later to make it a proper 20-plus mile day; how hard he tries to do what's expected of him, to do right) embodies (what can I say?) the concept of 'superlative'---no comparisons come close.

Kristine, there is something very sad in that photograph I picked up on. I wonder if others will notice? My thoughts are with you.

@Kent,
Thank you--Friday was a very tough day for Charlie, with incidents at school and later at home. He was glad to be out on his bike but it was one of those days when he just wasn't smiling much. He was definitely having some kind of stomach trouble---constipation---and not feeling good at all (quite miserable, I suspect). As you know, I don't believe in all the DAN/biomedical treatments, theories, etc., but we have often traced Charlie's difficult days, of late, to his stomach----his being so OCD leads him to limit his food choices and he is much more stubborn about this sort of thing than when he was younger. We plan to get him started on a new food program at school once things are more settled.

I am finishing my master's degree at Mercy College, and am taking a class, Curricular Assessment and Behavior Management For Students With Disabilities.

I need to ask someone, who is a parent of a child with special needs, for help on an assignment, please feel free to say no for whatever reason, if you are uncomfortable or are too busy (which I understand!!!) PLEASE, let me know.

My assignment is to ask two parents of a special needs child some questions. I have to be honest, I feel very uncomfortable asking anyone these personal questions. I think the teacher is being unreasonable to ask us to do this. I stay at home with my two boys so don't really know how to go to a school and ask to speak with a parent!?! Anyway, if you can help I would really appreciate it, if not, that is fine too.

The questions are below... My personal email is rosina.gandolfo84@gmail.com..

a. Talk to me about the period of time that you learned that your child was experiencing academic problems at school and was referred to special education.

b. How was the assessment for special education explained to you?

c. During the evaluation period and the first CSE meeting, were the assessment results explained well? Did you understand what the assessment person was saying?

d. What advice would you give to the diagnostician/school psychologist about explaining assessment results.

e. Do you contribute ideas for programming for your child during the CSE meeting? If so, how? If not, why?

f. What would be your overall comment regarding your child’s eligibility (for example: learning disabled, speech language delayed, autism, or mental retardation)? Has this category been fully explained to you? What are your questions, if any, that remain unanswered?

Thanks in advance!!!! I appreciate this so much.