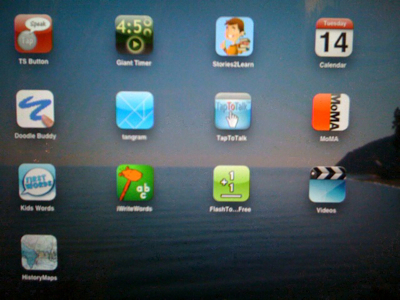 Still waiting to hear about a bus to take Charlie home.

Yes, contacting the transportation department and the special ed director are on the Wednesday to-do list.

On the longer term list has been, as I've from time to time mentioned, trying Charlie on some sort of augmentative communication device. We brought this up at the last IEP meeting back in February and it was mentioned that an augmentative communication evaluation would have to be done for Charlie by someone who knows what she or he is doing and that someone (our school district) would have to pay for the eval and that's about where the whole business has stalled, I mean, stopped, I mean---

Because if Mohammed won't come to the mountain, then the mountain better get motoring or at least, mobile digital device-ing, right?

So far, the apps Stories2Learn and TapSpeakButton seen to have some good potential for Charlie as far as prompting him to speak without us having to say for the umpteenth time 'say' and thereby helping him to communicate, especially at troublesome transition moments. Stories2Learn is billed as a program to help create social stories and I did make one about Charlie going back to school. We went over it twice before Charlie started school and I think I put in too much detail about dates and activities and so forth. I could see that Charlie could easily activate the iPad's touch screen---he has long wispy fingers and is still not able to use a trackpad on a laptop, and is lukewarm about the computer mouse.

It is very easy to upload images, type in a short phrase, and record video with Stories2Learn. So I made a 'story' called 'I like' and made 'pages' with photos of ketchup, bike-riding, using the computer, spring rolls, etc.. I've shown it to Charlie as a sort of prompt for him to talk about things he likes. Also, we've twice been in the car and i've turned on the 'I like' story to offer Charlie some choices of what he might like. Seeing the image on the iPad screen all crisp and clear and being able, at the tap of a finger, to hear a recording (of me) saying whatever is in the image has given Charlie some reassurance that he'll soon get what he'd like.

TapSpeakButton makes it easy as pie to record short phrases. I can then select from these and then put the TapSpeakButton on the iPad screen. This 'button' is big and simple-- a circle in red, blue, green, or yellow---a number of the apps for kids I've been looking through are a bit 'bells and whistle'-ish with cute animal animations, cheery singsong songs, and the like: Charlie has a lot of 'delays,' can't really read, etc., but those sorts of details can really distract him. The very simple format of TapSpeakButton is the right thing for him. He taps the big colored button, hears a phrase ('I want to go somewhere,' 'I don't want to do that'--things I intuit he is expressing with repeated no's or I want's), repeats it; over time, I'm hoping he might add some of these phrases to his repertoire.

Charlie is a long way from using the iPad independently. He doesn't see it as the 'hot new device' and is still getting used to using it. The YouTube interface ----Charlie loves to watch video clips of certain shows---looks very different from what it does on a computer Internet browser, so he is wary of it.

'He'll adapt,' Jim said yesterday evening after a bit of a stressful techno moment in which I was working both the iPad and the laptop with Charlie waiting, puzzled and patient, to see a video.

Indeed Charlie will. Just a few months ago we were wondering how he would do riding a bigger, adult-size bike and now he's become Mr. Gotta Do My 20+ Miles A Day.

And I'm thinking Charlie should ride the bus home all right, should we ever get the bus set up!

I think Charlie will adapt too, he seems to like to think things out in his own time first, which is okay of course!

I had to turn off youtube on Dimitri's iPod, it was motivating for him to use the iPod but he ignored everything else. Thinking about the size, can Charlie sit with this on his knee to use it or do you put it on a table?

The TapSpeakButton is a good idea, might try it out (keep Dimitri out of voice memos which has too many edit options and thingamegigs). Stories2learn looks useful too.

Thanks for letting us know how things are going with the iPad, it's really helpful! And I hope you get the school bus sorted out soon...

Yes, he does not care to be rushed/forced!

I have been outing the iPad on the table, propping it up with a stand that came with the protective case it's in. It's a wobbly and I'm thinking of getting something more stable, or propping it on books or some such which seems a bit ironic.

I am going to look up the programs you used with Dimitri too. I have been slow to intro the YouTube on the iPad for the very reason you mention!

There is also a Tap Speak Sequence that let's you records a series of phrases and import photos-- I like the latter idea in particular. I really like the simple format of Tap Speak Button; when I showed it to Charlie to use this morning (chage of clothes issue) he said 'blue' on seeing the big blue curdle. Technically right!

May the iPad become as useful to Charlie as the bicycle!

If you look back into my tweets for last night, I RT'd on an iPad case that looks very good. Let me know if you can't find it.

Thanks for highlighting some of the new communication technology Kristina. As Daniel Webster stated, "if all my possessions were taken from me with one exception, I would choose to keep the power of communication, for by it I would soon regain all the rest." Charlie, and so many other individuals with autism have a lot to say but experience some serious challenges in producing those messages. Augmentative and Alternative Communication is one tool for the tool-box in overcoming those challenges. And, hopefully the new technologies emerging will make AAC accessible to all who are in-need.

It's wonderful to watch Charlie grow, adapt and learn. It must be reassuring as you approach new challenges to know that he will rise to them in his quiet, persistent way.

Brilliant to use the iPad for his backseat time, too. He loves to look at your family's photos - do you think he would like all these wonderful shots of him and Jim on bicycles?

I finally bought the Stories2Learn app. It's not optimized for the iPad, only the smaller iPhone and iPod screens. The developer should have ported this to be optimized in the iPad, which isn't a very difficult process. His description of compatibility is misleading, just so everyone knows, you need to upsize it for the iPad.

@Kent,
You're very right--I'll keep this in mind when considering other apps.

@Louise,
I haven't yet put too many photos on the iPad-- Charlie sometimes is overstimulated by them. I've been thinking it is good to have on hand in case we ever get stuck somewhere with an endless wait.

@Patricia,
I think the possibility of using the iPad as an aac device really made us think it would be helpful, more than for games etc....... So often charlie seems to need that little nudge/ prompt to help him!

@Barbara, will check your tweetstteam. The cars for Charlie 's is from Incase.

I emailed the developer of the Stories2learn and he said they are working on iPad porting.